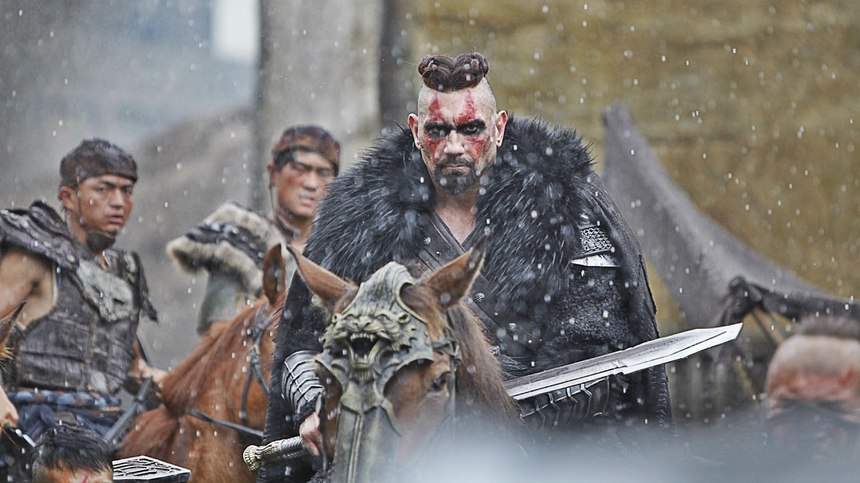 In Enter the Warrior's Gate, a teenager is magically transported to China where he learns to convert his video game skills into those of a Kung Fu warrior. The film is like The Last Starfighter re-imagined as an epic Chinese fantasy and that's exactly what drew director Mathias Hoene (Cockneys vs. Zombies) to high concept project in the first place.

Enter the Warrior's Gate is a Chinese/French co-production between Luc Besson's EuropaCorp and Fundamental Film. The two also partnered on Valerian and the City of a Thousand Planets which is slatted to hit theatres this July.

ScreenAnarchy: How did you get involved in the project?

Luc Besson was looking for a European Director who could do comedy, action and visual effects. So he found a German with a yellow belt in ninjutsu, a childhood spent painting Warhammer figures, and a movie called Cockneys vs Zombies to his name.

What about it made it something you were interested in?

The film reminded me of the movies I grew up watching as a kid in the nineties like Karate Kid or The Last Starfighter. I always wanted to do a martial arts movie and love Asian cinema and felt that Luc was maybe the only European producer I could do that with.

What were some of the challenges of making an international film like this and filming in China?

Working with a cast and crew from Europe, America and China was very complicated in terms of communication, which matters when you are trying to put together a period fantasy action adventure and every piece of direction needs to be spot on. Luckily our jolly team of French/Chinese artisans got used to the little sketches and annotated photos I would do on my phone to make sure everything I said, even when translated twice, was straightforward and unambiguous.

Casting an international film is complicated because on one hand you have the whitewashing controversy in the West, but then Asian audiences have not yet embraced American born Asian actors, while audiences in the West are not aware of all the amazing mainland Chinese, actors many of whom - to complicate matters - also don't speak English. In short it's complicated, but I am encouraged by the lively discussion that is going on and that can only be good for entertainment long term.

When watching Enter The Warriors Gate I don't think you will feel any of this because I was very fortunate with the cast on this film and I think the fun we had on set shows in the final movie.

The film industry is looking to international markets more and more, China and Russia. How has this impacted filmmakers and getting projects off the ground?

I feel it's exciting that a German director, who was born in Singapore and lives in London can work together with a French producer, American writer, Chinese, French and Canadian crew and actors from all over the world. It's good for the exchange of ideas and it's good for the art of filmmaking.

Currently there is a lively discussion about casting more internationally and telling local stories with a worldwide appeal. I think we're all still trying to figure out if we can make films outside Hollywood that have global appeal, but I hope it is possible because it'll help everyone tell fresher stories.

With that in mind I encourage everyone to watch the excellent films that Nini, Mark Chao, Francis NG and Kara Wai have stared in and spread the word so we can continue the dialogue.

What was it like working with Dave Butista?  He's everywhere right now!

Physically Dave is a seven foot monster with a voice so deep that there is no subwoover on the planet that can replicate it. But as a person he's the loveliest, most easy-going man you can imagine.

I skyped with Dave a few weeks before the release of Guardians of the Galaxy and he was joking that until then he was only asked to roar and growl in auditions but that in reality he's a funny guy. He told me that wanted to show that side of himself and that's why he wanted to play 'Arun' in Enter the Warrior's Gate.

Talking to him I immediately sensed that he was the right guy: he's got a cheeky glint in his eyes and great sense of comic timing and I think we'll see a lot more great work from Dave in the future.

What films did you look at for inspiration when approaching The Warrior's Gate?

I was thinking of the old Amblin classics like E.T. for the escapist feeling. Of course The Last Starfighter sprung to mind. The wizard character is inspired by the wizard in Sword in the Stone as well as 'Fizban' in the "Dragonlance" books by Margaret Weiss and Tracy Hickman.

For the Asian part I was vibing on Hero, House of Flying Daggers and all those millions of 80's Ninja movies I watched and forgot all the names off. Tonally, Pirates of the Caribbean was also a touchstone for fun, quirky action adventure.

Thanks for your time, Matthias!

Enter the Warrior's Gate was released in theaters, On Demand and on iTunes and Amazon on Friday, May 5, 2017.

Do you feel this content is inappropriate or infringes upon your rights? Click here to report it, or see our DMCA policy.
Asian CinemaEnter the Warrior's GateFantasyInterviewLuc BessonMatthias Hoene

Is this not pretty similar to the idea of The Forbidden Kingdom, from a few years ago?