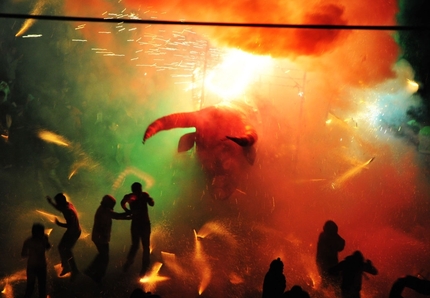 Do you remember that sequence in Beasts Of The Southern Wild when everyone runs around shooting fireworks at each other in the Bayou? The glorious dance of the visuals and music grasp at the essence and the onslaught of life's chaos. For a brief minute, we are high on hazard. It begs the question, could this ecstatic but transient moment be stretched out into a feature film?

Almost. Here, we can have a breath-taking 67 minutes.

Vicktor Jackovleski and the Court 13 Collective, many of whom are responsible for making that award-winning 2012 film, deliver the sensory-overload documentary, Brimstone & Glory. It lives up to both the promises of its title.

Tultepec, a small town of about fifty thousand located just to the north of Mexico City might be the most dangerous small town to live in on the planet. This is not from crime, or poverty, or bad weather, albeit it appears to have these elements, like most towns. No, it is because the municipal principle industry is the design and manufacture of fire-works. So when this town puts on a fireworks show, in the name of religion, but in the spirit of spectacle, danger, and one-upmanship, take note. The resulting festival is a Hieronymus Bosch hellscape come to life.

Like an amalgamation of the lo fi all-nighter of the Ross Brothers', Tchoupitoulas combined the wide-angle compositions of recent Terrence Malick films, the in-the-thick-of-it cinematography induces at times, the sensation of an oncoming panic attack.

Recall that scene in Death Proof where Rosario Dawson wears a look of horror as she realizes her stunt driver pal is actually 'surfing' on the front of speeding muscle-car going 100 miles per hour, and how the horror on her face slowly dissolves into an expression of the purest mirthful glee as she participates in the sheer terror of this kind of entertainment. Brimstone & Glory walks through that transition from both ends, again and again.

The film is structured into two distinct 30 minute halves. The first half, scored to suspense inducing percussion from Beasts of the Southern Wild director, Benh Zeitlen (here on composer duty only) indoctrinates us to Tultepec's unique culture of pyrotechnic manufacture. The Catholic Saint, San Juan De Dios, patron of fireworks makers, and he of unburnable skin, is celebrated for a weeklong festival, in a way that could only come from spiritual onus. As in, "dance in the fire, my son, for I walk with you."

We follow the child of one of the makers of the massive fibre-glass and Papier Mâché bulls that are laden with fireworks and will careen through the streets on wheels as people run for cover from shooting rockets and showers of sparks.

We see the building of multi-story towers, "Castles of Fire," constructed with steel and wood, and men who wear not an ounce of safety equipment as they drape these edifices with hundreds of kilograms of explosives. We know this, because one of them is handily wearing a go-pro, and his view is more vertigo inducing than anything from Man On Wire.

During a desert thunderstorm, lightning strikes one of the towers, igniting the carousel-sized Catherine Wheels and starting 'the show' a bit too early. Again, the workers free-climb the structures, this time in high winds and pounding rain, to put out the flames so as not lose the city of castles. Other men pull down on guylines to not have the structures collapse. Police and paramedics walk a massive staff through crisis management and triage as thousands of people come to participate in the festival. Unlike, say, Hill Street Blues, the script here is along the lines of, 'unless the person has at least 30% of their body burned, don't take them to the hospital, we need the ambulances. Put the drunk and belligerent injured parties to the back of the line." Nowhere is mentioned 'be careful out there," because this is not that kind of festival. The purpose of many of the visitors for coming is to 'get slightly hurt' and take away a scar-memento from San Juan De Dios. Burn footage and eye-damage provide a wince-worthy counterpoint to the ecstasy of the celebration. This film is not for the faint of heart.

We follow a boy, who is hesitant to go all-in on the festival this year by himself, as he first witnesses the Castles of Fire, then does indeed goes all-in for Tultepec's flaming take on Pamplona's Running of the Bulls. He climbs inside one of his fathers creations, and comes out the top to witness the fiery spectacle of his town on fire, both figuratively and literally at times.

This is the second half of Brimstone & Glory. Full on chaotic immersion, via ultra-slow Phantom photography, above-it-all drone footage, and fuzzier Go Pro footage on revelers. We are a party to both God (the capture of the cinematographers) and the boy (the witness) simultaneously. From the relative safety of a cinema seat (more lamentably, probably a TV or tablet) we get the gist of this boy's own Death Proof moment. Glory to the filmmaker. See this in the cinema.

More about Brimstone And Glory