Destroy All Monsters: Thanks, GIRLS! 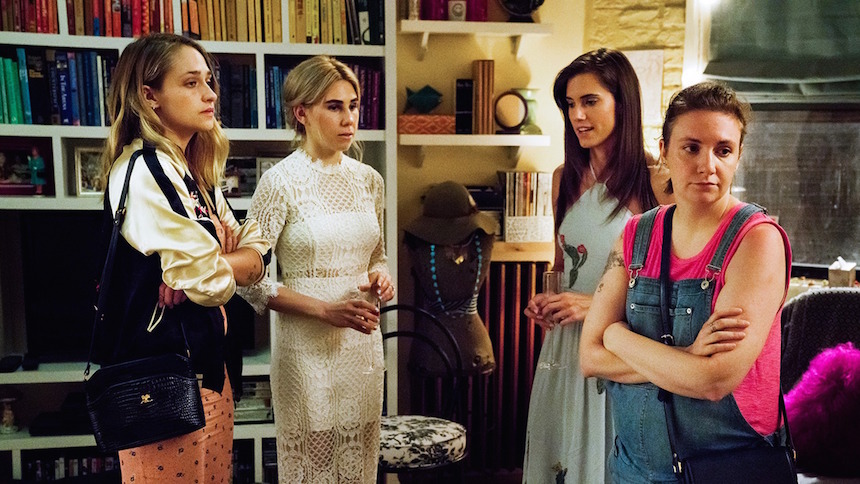 I'm not going to add much to the discussion of Girls, where other writers have ably carried the conversation, besides returning to a point I made a few years ago: I'm glad this show exists, has existed, did exist; and as it wraps itself up in a non-bow that Hannah might have tried to tie for two minutes before giving up and eating a bunch of date squares, I know that we've seen the passing of one of this decade's great pieces of art. Girls belonged to the second decade of the 21st century in a way that only a handful of other pieces of pop culture did, or could.

Painful specificity begets great, general relatability. No, Girls didn't, wouldn't, and couldn't address any other subsets of American culture besides the white women who took its centre (with a conditional pass for Elijah's screaming vantage point on Broadway queer culture). But without excusing that myopic focus in any way, Girls is about as direct, unyielding, and incisive a study of white culture as can be made.

That culture is one whose blind self-absorption has had terrible consequences for America and the rest of the world (and will, I fear, continue to do so). Girls was about this self-absorption so unrelentingly that it was, sometimes for whole seasons at a time, as off-putting and difficult to grapple with as Lena Dunham's real-world personality.

Girls never resisted the opportunity to lean into that pathological narcissism, make it harder and uglier and worse until it was cringingly funny, and in so doing, laying absolutely bare the structures of thought that lead to such self-regard in the first place. Girls never let the girls off the hook, particularly Allison Williams' Marnie, a character who - to an even greater degree than Dunham's Hannah - could spew things out of her mouth that transformed her into an unabashed parody of blissfully unconscious, white female entitlement in modern, "Make Great Again" America.

As much as I screamed at her - and plenty - while watching the show, Williams proved to be Girls' MVP, staring unblinkingly into the scripts' general desire to frequently turn her into one of the most loathsome people on television. Williams' equally extraordinary turn in this year's Get Out show an actress willing to weaponize her supermodel looks and pop star singing voice into a decade-long excoriation of the ugliness that those commodities hide.

Dunham, meanwhile, doubled down on every whispered complaint about her own nudity on the show and seemed to be naked constantly this year: sunning her vagina in the Hamptons, Shailene Woodley-style, or lolling on the couch five months pregnant under the torments of a broken air conditioner, wearing nothing.

Some of the pressure of these peoples' overall awfulness began to leaven in this final season, as they - particularly Hannah - began making incremental moves towards a sense of their own ridiculousness and a reckoning with same. It's the kind of payoff longform narrative is theoretically always driving towards, and if Girls never seemed like it would turn out to be a "hugging and learning" show, the table stakes of one's twenties were part of the mission statement from the beginning: and for good or ill, those stakes are always change, adjustment, and perspective.

So Hannah was already turning into somewhat less of a dipshit, even before she found out she was pregnant; and upon receiving that news (in a splendid Patrick Wilson return cameo), she made what is simultaneously the most and least Hannah decision in the history of the show: she kept the baby, and started laying tracks in front of that oncoming train which might, from an outsider perspective, even resemble mature decisionmaking. (Case in point: not letting her brief reunion with Adam extend past a single day.)

Jessa and Adam, meanwhile, reached the circular height of their own vanity, after shacking up together in a cuckoo's love nest, by making a 47-minute art film about Adam's relationship with Hannah. It was a staccato subplot whose value seemed flyweight at the time but which, thank goodness, at least got Jessa to the point where she could admit to Hannah that she's been a fairly terrible person.

That scene - which, appearing in the penultimate episode, turned out surprisingly to be Jemima Kirke's last - was unexpectedly devastating. Jessa's been unabashedly horrid for so long that it became easy to assume none of it was meant to go anywhere; but the tearful confession not only came with the whiff of having been earned, but exposed the possibility that Jessa - in similar, but different, means as her cousin Shoshanna, who was kept offscreen for most of the season to suggest a life finally moving past this framework - has an interiority whose depths Girls never focused on, and in fact outright ignored.

Instead, the show gauged her self-destructive behaviour as a disease (often upon others) rather than a symptom of its own, deeper pain. I like this level of artistry: a show who's narrative strategy, itself, confers the frustrations of viewpoint upon the audience, and makes them, discretely, as complicitly narcissistic as the characters they are observing.

This was Girls' great skill, a skill which only sharpened over time: the ability to take a vision of white New York that was both an unabashed, Woody Allen fantasia (who has that many interactions with random strangers who turn out to pull the rug out from under your self-delusions exactly as you need it?) and render upon it a humanity that is as embarrassingly ugly as 90% of our actual, real-world behaviours.

It played "outrage chess" with us, daring the thinkpieces and twitter rants to come, knowing it was three moves ahead and baking our own reactions into its project. It blew up big, pissed us off, faded from view. Kept doing the work. Moved its characters along. Suggested - optimistically, or even naively - that such growth is still possible.

Delightful, though, that in the final episode, Hannah has essentially reverted - living with Marnie in upstate New York and trying to care for her five-month-old baby, any assumed wisdom or grace that the character might finally have gleaned in the last year and a half has vanished under the pressure of sleep deprivation and a baby who won't latch. While Girls was never going to be a "happy ending" show (or a "sad ending" show for that matter; this was always going to be a "life just continues to happen" scenario), it was deeply satisfying both to witness the characters' fractious evolution in season six, and watch some of that evolution naturally backslide when faced with opposition, because that's exactly what always happens.

Girls was kinder to us than we deserve.

Destroy All Monsters is a weekly column on Hollywood and pop culture. Matt Brown is in Toronto and on