Crowdfund This: BULLETS OF JUSTICE, aka WTF Did I Just Watch??!! 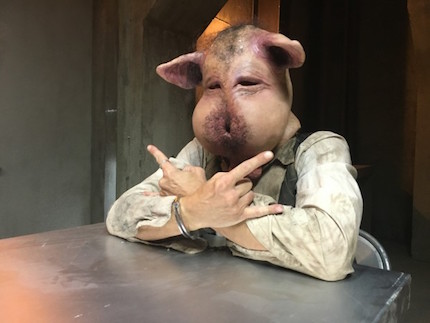 25 years later a breed called "Muzzles" have occupied top of the food chain, eating and farming humans like animals.

Watch Danny Trejo ham it up in the trailer for Bullets Of Justice, a pigshit insane TV pilot in need of crowdfunding pork for post-production. The tail-curling teaser looks good enough to suggest a feature film - if they've really hogged it all for just a pilot, then we may be looking at the the most pignacious and deboarched episode of TV ever created.
Timur Turisbekov from Khazakstan appears to be the swine behind this. Let's help him bring home the bacon!
Visit the Indiegogo page for more insanity, er, information.
1
Sign-In to Vote
Tweet 0 Submit

Do you feel this content is inappropriate or infringes upon your rights? Click here to report it, or see our DMCA policy.
Bullets of JusticeDanny TrejoTimur Turisbekov

More about Bullets of Justice

I like how Danny Trejo's daughter has inherited his tache.
I think you mean interbreeding not inbreeding although the pic of pigman arseface could be from inbreeding.

Big smiles here. That looks gonzo as fuck. Sign me up!

Did this dude just kiss his own sister? Lol! This looks like B-movie madness!! I love it!

" Big smiles here. That looks gonzo as fuck. Sign me up"

WTF did you make me watch? And when can I see more?

That stash, I'm sold. Although it needs more nuns.

Any info as to why the campaign was closed? Did a company come on board?