SXSW 2017 Review: MAYHEM, So Fast on Its Feet That It's Almost Out of Control 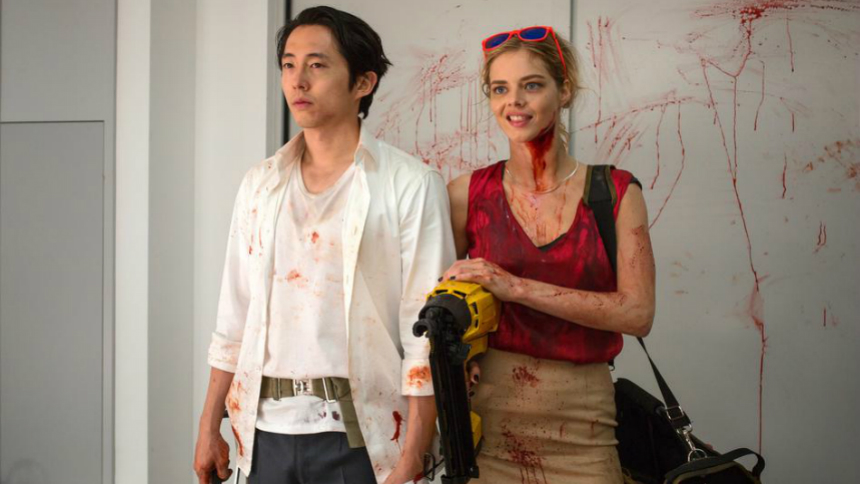 With great lead performances by Steven Yeun and Samara Weaving, a great musical score by Steve Moore, and great bloody action masterminded by director Joe Lynch, Mayhem is almost too much fun.

It's the perfect example of a movie that knows what it is and is more than happy to deliver that to an audience eager to devour it. Lynch burst onto the genre scene with Wrong Turn 2: Dead End, a direct-to-video sequel that was far better than it had any right to be. More recently, Everly featured Salma Hayek in a furiously entertaining action picture that, again, exceeded expectations.

Mayhem spreads that same action spirit out over a larger cast trapped in an office building after an outbreak of the so-called 'red eye' virus, which eliminates all inhibitions, leading to unbridled blood lust. That sets up a recklessly entertaining scenario that is less serious than Everly and more comic in its intention and execution, thanks in part to a cheeky script by Matias Caruso, ace cinematography by Steve Gainer, and razor-sharp editing by Josh Ethier.

And what execution! In a nicely-turned rise through a voracious corporate law firm, ambitious attorney Derek Cho (Steven Yeun) has progressed from a fresh-faced newbie to a jaundiced junior-level manager. He's risen just enough to become prey to a insidiously vicious upper-level attorney known as The Siren (Caroline Chikezie); she offers him as a sacrificial lamb to the board of directors to avoid taking responsibility when one of her cases goes ka-blooey.

As Derek is being shown out the door, the 'red eye' virus explodes like a bomb in the building, leading to widespread physical brutality and even outright murder. The effects of the virus are said to last eight hours; during that time, no one will be held responsible for their actions, and so bones break, flesh is torn, bodily fluids are exchanged, and murder is committed freely and without restraint.

The virus lays bare everyone's worst instincts, and Derek's impossible desire to clear his name and get his job back takes precedence over the common sense that should have told him to accept his fate and move on with his life. Instead, Derek becomes determined to reach the top floor and speak with the evil CEO and the board directly.

Improbably, he teams up with Melanie Cross (Samara Weaving), a woman who plead for mercy from the law firm so her family could keep their place just before the virus struck. Following orders from above, Derek had shown Melanie no quarter, inciting her righteous fury, so she is not eager to help him achieve his goals. In the outrageously violent hurricane that has blown into the office building, however, Melanie can see Derek might have a few tricks that will help her survive, and maybe score some emotional justice, too.

Yeun, best known for TV's The Walking Dead, takes full advantage of the opportunity and fully owns his character and the movie; he's entirely authentic as an imperfect action hero who acknowledges his own shortcomings before putting them aside to deliver a gasoline truck full of whoop-ass.

He's well-partnered with Weaving, who made a guest appearance on TV's Ash vs Evil Dead that impressed director Lynch. She has a nail-edge charm that refuses to give up or listen to common sense, and she too convinces in her action heroine performance.

So fast on its feet that it's almost out of control, Mayhem is a tight little package that hugs all its curves, and tucks in a surprise or two ... or three. Don't expect great emotional depth -- that's not what the movie is about; it's about watching two people fight and claw their way to the top, with humor, smarts, and a nail gun.

Article updated on 3/17/17 to correct the misspelling of Mr. Yeun's family name. Thanks to commenter Danny.

The film enjoyed its world premiere at SXSW.

Do you feel this content is inappropriate or infringes upon your rights? Click here to report it, or see our DMCA policy.
Joe LynchSamara WeavingSteven YuenSXSW 2017