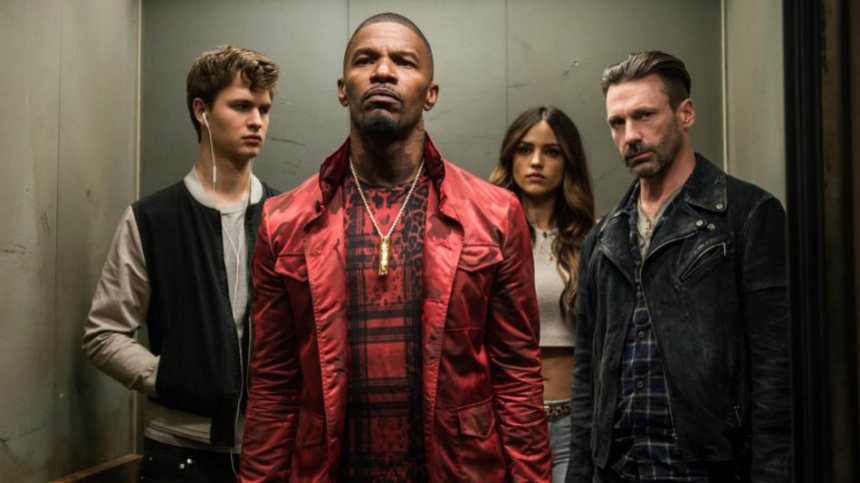 Voom voom voom! So begins Edgar Wright's Baby Driver, which finds Ansel Elgort behind the wheel as a getaway driver, rocking out to the a song blasting from the buds planted in his ears.

In the privacy of his own space, the young driver known as Baby lip-syncs with total abandon, or as much abandon as he can manage while strapped into an automobile parked outside a bank while his criminal cohorts rob it. Soon they are racing down the streets and highways of Atlanta, the cohorts bug-eyed as Baby revs, shifts, and jams that wheel.

The hot pursuit is an early tour de force in the movie, which pays homage to Walter Hill's The Driver in a distinctly different manner than Nicolas Winding Refn's Drive. Whereas Refn was inspired to make his own style of automotive noir, Wright launches the next phase of his career with a freshly careening, sweetly romantic, laugh-out-loud funny thriller that almost feels epic.

This is the first script that Wright has written alone, though its genesis dates back more than 20 years, according to the filmmaker. Completed between Scott Pilgrim vs. the World (2010) and The World's End (2013), it reflects the dizzying heights of the former and the gravitas of the latter.

Flying solo in the creative process, as it were, allows the audience to experience Wright for the first time, and Baby Driver marks a rebirth of sorts, coming after the delays brought about by his unsuccessful efforts to make Ant-Man. It's not that Wright has somehow changed dramatically; fans of his earlier films are bound to be delighted by the lightning speed of the comic delivery and quicksilver tonal changes.

Young as he is, the titular character in Baby Driver is already an experienced pro, to the point that he is relied upon by Doc (Kevin Spacey) for all his missions, even though Doc changes up the other members of the team. Baby is indebted to Doc and he has just "one more job" to get square. Of course, any movie fan knows that "one more job" is never an easy one, and so the presence of wild card Bats (Jamie Foxx) in a new team makes Baby's future prospects exponentially more difficult to achieve.

Baby lives with Joseph (CJ Jones), a deaf African-American gentleman who is old enough to be his ... well, that is explained, and it's part of Baby's backstory involving his parents, especially his dear mother, and why he keeps buds in his ears to listen to his own mix tapes. One day he is enchanted by a waitress in a diner, and she is charmed by his modesty, and soon Baby is falling for Deborah (Lily James), and she is falling for him.

As might be expected, their future together is hampered by Baby's profession, and that leads to more brazen robberies that rely upon his instinctive skills as a driver. Wright ties everything together in ways that are fascinating -- and sheer fun -- to watch unfold, tapping into childlike memories about the magic of the movies.

Yet with abundant profanity and deadly violence on display, this is not child's play. Wright also twirls dramatic emotional depth into the mix; after all, these are criminals, not teammates, and their vested self-interests are ready to turn on a dime if need be, and their thirst for murderous revenge is not easily slaked.

Jon Hamm adds tremendously to the picture, along with Eiza Gonzalez as his partner in life and crime, and the supporting cast as a whole teeter easily between comic and dramatic delivery. Ansel Elgort really comes alive in the lead role, more than fulfilling the idea of a young man who has come of age behind the wheel yet still needs to do some growing up.

For fans of car-chase movies, Baby Driver is aces, slamming into Walter Hill greatness territory with an energetic variety of top-notch action and invention. For everyone else, Baby Driver is simply grand entertainment.

The film enjoyed its world premiere at SXSW. It is scheduled to open wide in U.S. theaters on August 11.

Do you feel this content is inappropriate or infringes upon your rights? Click here to report it, or see our DMCA policy.
Ansel ElgortEdgar WrightJamie FoxxJon HammKevin SpaceySXSW 2017