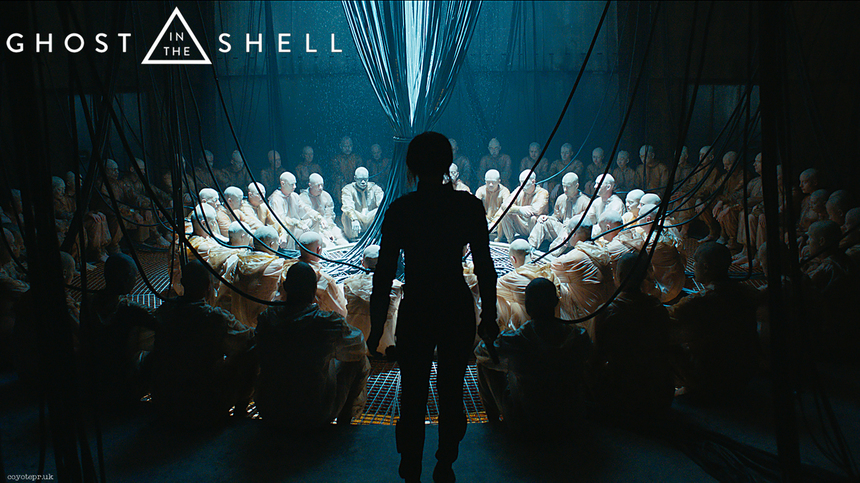 Updating a much loved anime classic like Ghost in the Shell was never going to be an easy task. There are fans to worry about, but also a general audience - warranted by the price tag of an ambitious sci-fi production - who may not have warmed to the didactic chill of the Japanese original. Visual stylist Rupert Sanders rises to the occasion with a live action Ghost in the Shell boasting stellar set pieces and design, but which also streamlines and humanizes the original's story and themes without completely dumbing them down. Unavoidably, something is lost in the translation from Japanese anime to Hollywood commercialism, but it's a worthy effort that shouldn't give diehard purists much to scoff about.

The Major is an elite fighter in Section 9, a government counter-terrorism group funded by robotics company Hanka. She's a cyborg who's been on the team since her brain was plucked from a left-for-dead refugee and hardwired into her current form. Her agency is after a powerful and mysterious hacker who is targeting Hanka scientists but various glitches in her system are splicing strange apparitions into her sight.

The story in Hollywood's Ghost in the Shell doesn't stray far from what happens in Mamoru Oshii's film aside from a few scenes or characters being switched around, a greater focus on the evil corporation behind the affair and backstories for some of the protagonists. Whether the new elements were written for this or sourced from other iterations of Ghost in the Shell I couldn't say (I've only seen the first two Oshii films), but the memorable set pieces are all there, almost completely intact and recreated with often eye-popping technical wizardry. Among the new imagery that gets thrown into the mix are a number of bizarre and welcome tableaux, particularly when the Major goes on a cyborg headtrip when she 'deep dives' a downed robot.

Like the original, New Port City is modeled on Hong Kong rather than Tokyo. Given a kaleidoscopic makeover, the Asian city state, with its dense urban jungle and vibrant street life, becomes as much a character in the film than anyone else. Alas, what the new version does lose is the memorable Kenji Kawaii score, which did feature in some of the trailers. The new soundtrack does little more than blend in.

While Ghost in the Shell is a very faithful adaptation of the 1995 anime classic, the update is also inspired by several Hollywood sci-fi classics, most clearly Blade Runner and The Matrix. Blade Runner was of course a major influence on the original, but Sanders' take goes further, particularly in the neon-drenched design of the futuristic New Port City. The nods to The Matrix, primarily evident through the Major's balletic gun routines, are fitting, as the Wachowskis' film was itself heavily indebted to Ghost in the Shell.

Many column inches have been devoted to the whitewashing controversy surround the casting of Scarlett Johansson as the Major but there's no doubt that the role finds the star in very comfortable territory. Following her enhanced fighting machine in Lucy and eerie alien in Under the Skin, she's carved an impressive niche playing threatening woman with far richer characteristics than the average femme fatale. Ghost in the Shell is another win for Johansson as she nails the physical demands of the role and convincingly balances the robotic-ness and burgeoning emotional spectrum of a cyborg with an identity crisis.

No one else in the cast really stands out, save for Takeshi Kitano, playing the head of Section 9, who comes off more as a show of reverence to the film's Japanese origins than a well-integrated piece of the puzzle. Given the world the film takes place in, it's not far-fetched for him to speak exclusively in Japanese while everyone understands him and responds in English, but it's a little jarring all the same.

With enough meat connecting it to the original, Sanders' film may pass the test with fans, but how about the rest of the auditorium? Its impressive visual flair and strong action quotient should satisfy a number of viewers, but given the amount of titles with similar themes that have appeared in the last two decades, the new Ghost in the Shell is unlikely to have the same impact on viewers, one that goes past the 3D glasses and lodges itself into the brain as food for thought. ScarJo and Sanders have brought us a visual treat showing a great deal of reverence to its source, yet it's a shame it didn't try to push its ideas further.

Do you feel this content is inappropriate or infringes upon your rights? Click here to report it, or see our DMCA policy.
ghost in the shellmamoru oshiirupert sandersscarlett johansson