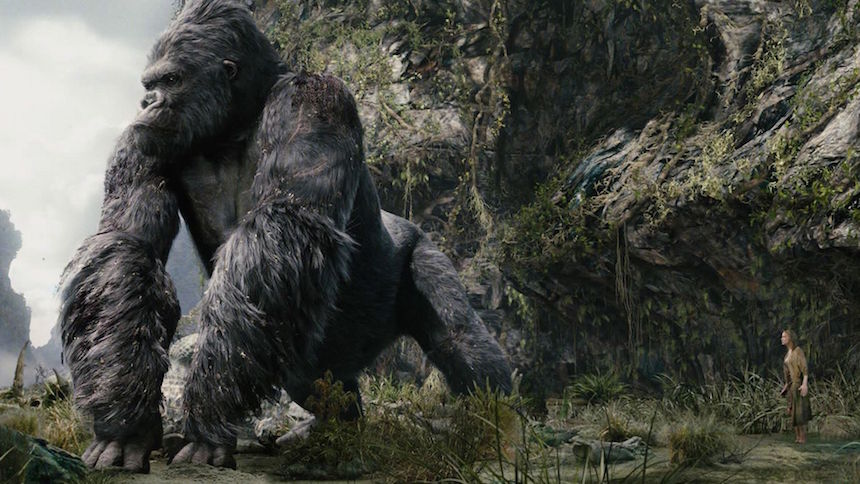 It's always a pleasure to write a sentence about a film that the filmmaker himself would recoil from in disgust, but here it is anyway: Peter Jackson's 2005 King Kong remake is the best King Kong movie, surpassing the original.

I wrote this before seeing Jordan Vogt-Roberts' Kong: Skull Island this week, so this isn't intended as a knock on that movie, though as with most of the King Kong spinoffs (Son of Kong, King Kong Lives, Kong Kong vs. Godzilla), there's nothing in Skull Island's plot structure that allows it to come close to the weird, earned pathos of the original, or Jackson's remake. Which is a long way of saying: I like my Kong tragic, and Jackson's Kong, building on and enhancing Merian C. Cooper's original, is giant monkey tragedy par excellence.

It's hard to discuss Jackson's Kong without connecting it, at least tangentially, to The Lord of the Rings trilogy, for which the New Zealand filmmaker's Kong revision serves as both prologue and victory lap. Jackson, his partner Fran Walsh, and his production/design company Weta, were neck-deep in development for a King Kong remake for Universal before The Lord of the Rings was a gleam in their eye - though when that project was cancelled, they re-dedicated the same team and approach to what would become the industry-changing fantasy trilogy.

One sweep at the Oscars later, and it's hard to see King Kong as anything other than Jackson's victory lap: marshalling all that production capital, craftsperson expertise, and systemic goodwill to indulge the ultimate film fanboy dream scenario of remaking one's favourite movie of all time. It's like if I got tapped to make a Star Wars tomorrow. (Lucasfilm: call me.)

The resulting movie clones The Lord of the Rings' epic length precisely, running three hours for no particularly good reason other than that it can. Indeed, the first fifty minutes or so of King Kong are both interminable and unnecessary, setting up wafer-thin character conflicts (Carl Denham is recklessly ambitious! Ann Darrow has abandonment issues! Jack Driscoll's a writer this time!) in an attempt to create out of whole cloth a Fellowship for this movie whose deaths-by-Kong might be more emotionally resonant than, say, the lawyer getting chomped in Jurassic Park.

I suppose I ought to clarify this. I've called Jackson's Kong the best Kong (though realistically, that is only ever a two-film race) and yet I'll happily call the film's first hour aimless and, like pretty much the entirety of the project from inception to release, nerdishly self-indulgent.

We in the film blogosphere hold to a particular set of ideals that generally suggest that filmmakers are geniuses whose unalloyed potential is constantly being mucked with by the studios (the "suits") who give them their money to play with - that The Wolverine would be as good as Logan if Fox hadn't want it to feel more like the other X-Men movies, for example, or that the DCEU in general wouldn't suck so much if Warner Brothers could just get its head out of its ass and empower filmmakers like Rick Famuyiwa to make a really kickass Flash.

That entire idea is pretty much nonsense, but I recognize the appeal; directors make good figureheads for the wholesale collaborative machinery that is filmmaking, and studios make great bad guys. Once in a while, though, we get to see a version of the scenario where the balancing effect of the studio team is drained, as much as possible, out of the process, and the resulting movie gets to be as wild and wooly a portrait of the filmmakers' pure intent as one ever gets to see. Such a film is Peter Jackson's King Kong.

I know this because once the Venture arrives at Skull Island, King Kong becomes amaaaaaaazing.

Few movies throttle down quite as quickly and overwhelmingly as King Kong. From just about the moment Ann is kidnapped to serve as a sacrifice to the god-king Kong, King Kong leaps to a propulsive pace that doesn't let up for about another twenty minutes, when Kong finally drops Ann like a rag-doll in the heart of his mountaintop sanctuary. For a three-hour movie, King Kong is fast.

And for a movie not called Kong: Skull Island, King Kong is an amazing showcase for the island upon which it is set. Filmed entirely in constructed locations (because no real jungle, in New Zealand or elsewhere, would suffice), Kong shows Jackson and his team at their most judicious in playing with the tension between what is realistic and what is purely phantasmagoric. (The Hobbit trilogy's forests and jungles, many of them also manufactured, would tip the balance in the wrong direction.)

Like the 1933 film, Jackson's Kong spends its entire second act pivoting between the Ann/Kong set pieces and the Venture crew set pieces, as each group gets itself into a series of encounters with the things that make Skull Island a seriously terrible place to take a vacation. The central, movie-defining piece de resistance in all this, of course, is the extended sequence in which Kong faces down three T-Rexes, as if the film is proudly thumping its chest in its willingness and ability to outmatch the original film's measly one dinosaur.

The sequence as Jackson reimagines it bears all the hallmarks of a lifetime of imaginative play (the reconstruction of the Empire State Building finale will do the same). Where Kong '33 was still locked very much in a sense of the proscenium arch (both due to effects limitations and its overall place in the development of film technique), Kong '05 is more three-dimensional than most 3-D movies made since Avatar. The Kong/T-Rex throwdown is staged in X, Y, and Z-axis moves (a great quantity of it takes place as Kong and Ann tumble down a crevice) and uses the berserk topography of Skull Island (where the crevice in question can be Grand Canyon-deep) to hyperbolize ever action.

It also, of course, shows off the (at that time, new) advantages of having an actual actor performing your digital characters. If Gollum was Andy Serkis' (and motion capture's) breakout role, Kong is the graduate thesis. There's life in those eyes, and specificity in the acting choices, and it all comes to bear in tiny moments where we see Kong judge his own likelihood of defeating the T-Rexes and then deciding, yeah, he can do it.

The depth of the Kong performance drives the film's other supreme advantage: it takes the original film's suggestions of Kong's loneliness and the unfairness of his demise, and fully dramatizes them. Quiet moments between Kong and Ann - first, watching the sunset from Kong's home; later, playing like children on a frozen pond in Central Park - reach deep into the idea of Kong as a character, and imbue him with a lived history that is real, tangible, and heartbreaking.

Being a remake, Kong '05 has one more trick up its sleeve, one which qualifies as an unfair advantage: like Titanic 8 years prior, we know where King Kong is going. The Empire State Building, when it is revealed, is presented and perceived as the story's natural end point, an outsize boss villain that we already know Kong will not be able to defeat. (The near-silent reveal of the biplanes approaching, at the tail end of another shared moment of beauty between Kong and Ann, plays this inevitability like a fiddle.)

This allows Jackson to revel in the destruction of his playset, a slow-motion (both literally and figuratively) elegy for a cinematic event (the death of Kong) that made such an impression on him and so many other fantasy filmmakers in the 20th century. The third act of King Kong is loving and nostalgic without being mawkish or preening; it lands the gory uncaringness of man while making half its audience cry.

Three hours might seem like an insane length for a King Kong movie, but the result is both splendid cinematic spectacle in a theatre-of-attractions mode, and one of the few instances in film where the death of a CGI character feels wholly tragic and wholly earned. There's a reasonable argument that a remake of King Kong never needed to be made except as a once-in-a-generation studio quirk. It's also arguable that King Kong is Peter Jackson's masterpiece.

Do you feel this content is inappropriate or infringes upon your rights? Click here to report it, or see our DMCA policy.
King KongMerian C. CooperPeter Jackson