Pretty Packaging: THE BLUES BROTHERS Gets A German Edition Worth Going To Jail For

Ard Vijn
Editor, Europe; Rotterdam, The Netherlands (@ardvark23)
Tweet Post Submit
When I heard that a company in Germany was bringing out a special extended edition of John Landis' 1980 comedy The Blues Brothers, a few thoughts went through my mind. First of all, was it truly an extended version or did it put back scenes excised for the German market back in 1980? Hell, I could think of some... but apparently Germany got the same version in 1980 we all got, and the extended version is indeed a 15 minute longer cut edited by John Landis in 1999.

The second question in my mind was: why is Germany the only country to bring out such a royally pimped edition? And the answer to that apparently has to do with the German tradition of dubbing all films in German. The distributor went to extreme lengths to get the original 1980 German voice cast re-assembled to provide sound for the newer 15 minutes, and while they were at at they obviously thought: "If we're going to do this, we might as well go for broke".

This edition was released in September 2016, promptly sold out, and can now only be found for inflated prices, still rising as we speak. Normally I write these "Pretty Packaging" articles as a head-up for collectors about something cool, but in this case that train has left already. Rather, I hope that spreading the news about this edition will entice other countries to ponder a similar release.

It's a total looker and I'm very happy about owning it, so here is a gallery of shots. Click on the edge of the pictures to scroll through them, or at the center of each to see a bigger version! 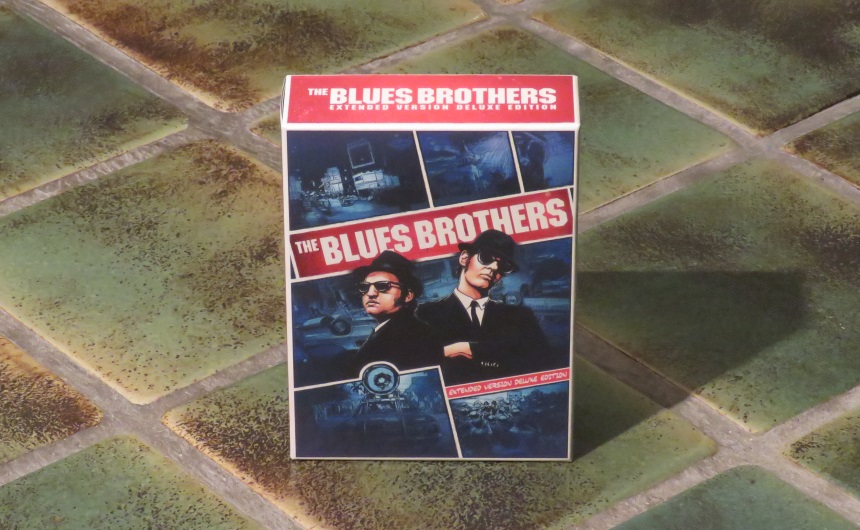 And here it is, a sturdy cardboard box with comic-book art. 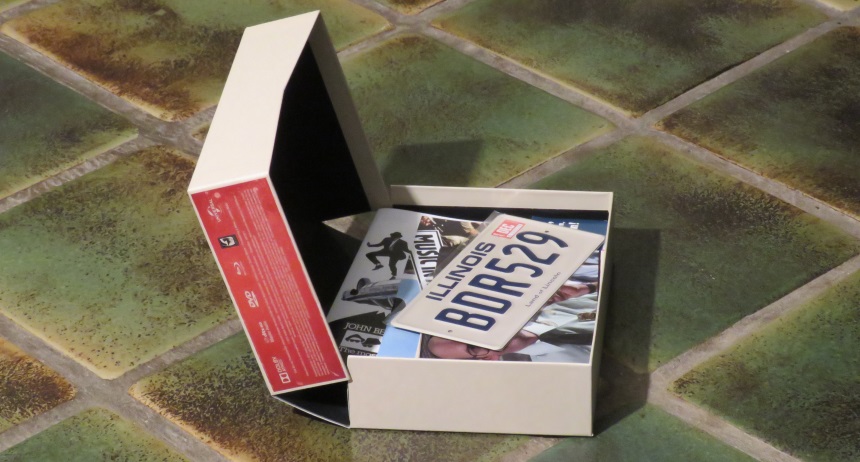 It's not a slipcase but an opening box, and inside is a treasure trove of physical extras. 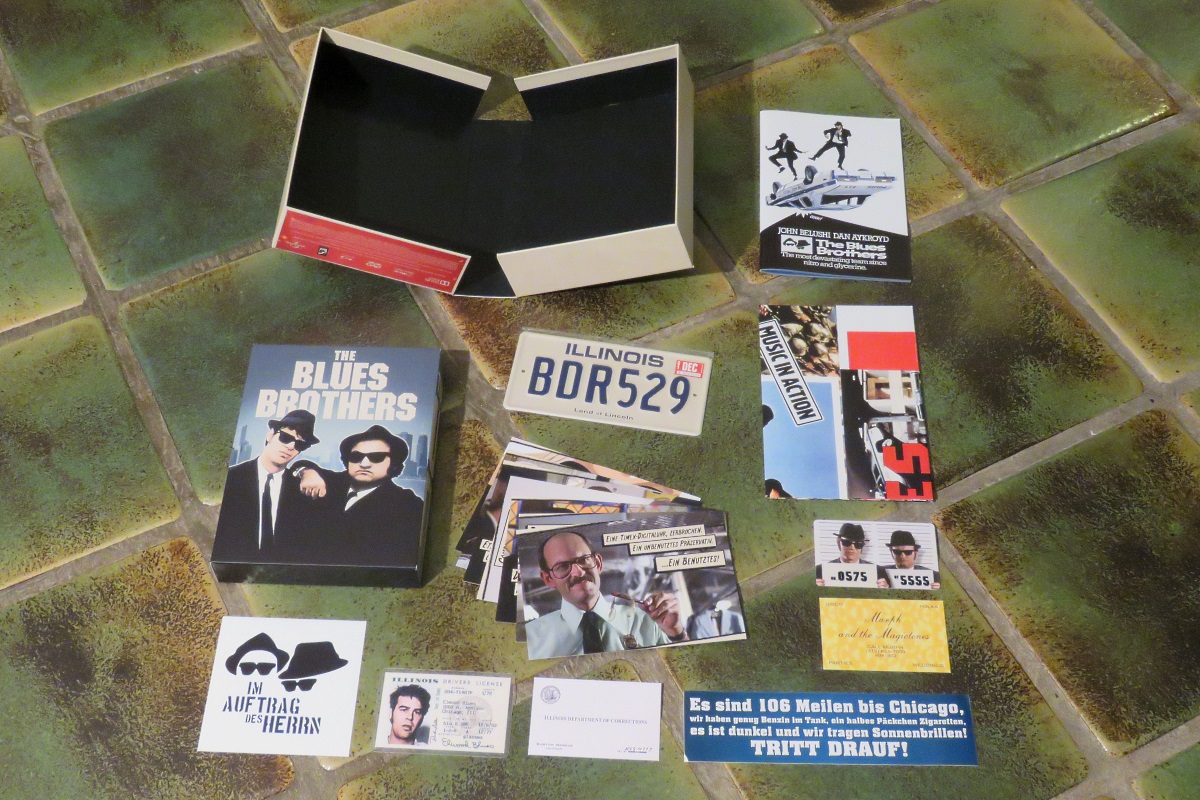 All contents removed: we get a four disc Digipak in its own slipcase, art cards, stickers, a great 48-page booklet a folded double-sided poster, several trinkets like a copy of Elwood's drivers license and a metal license plate of the Blues Mobile. 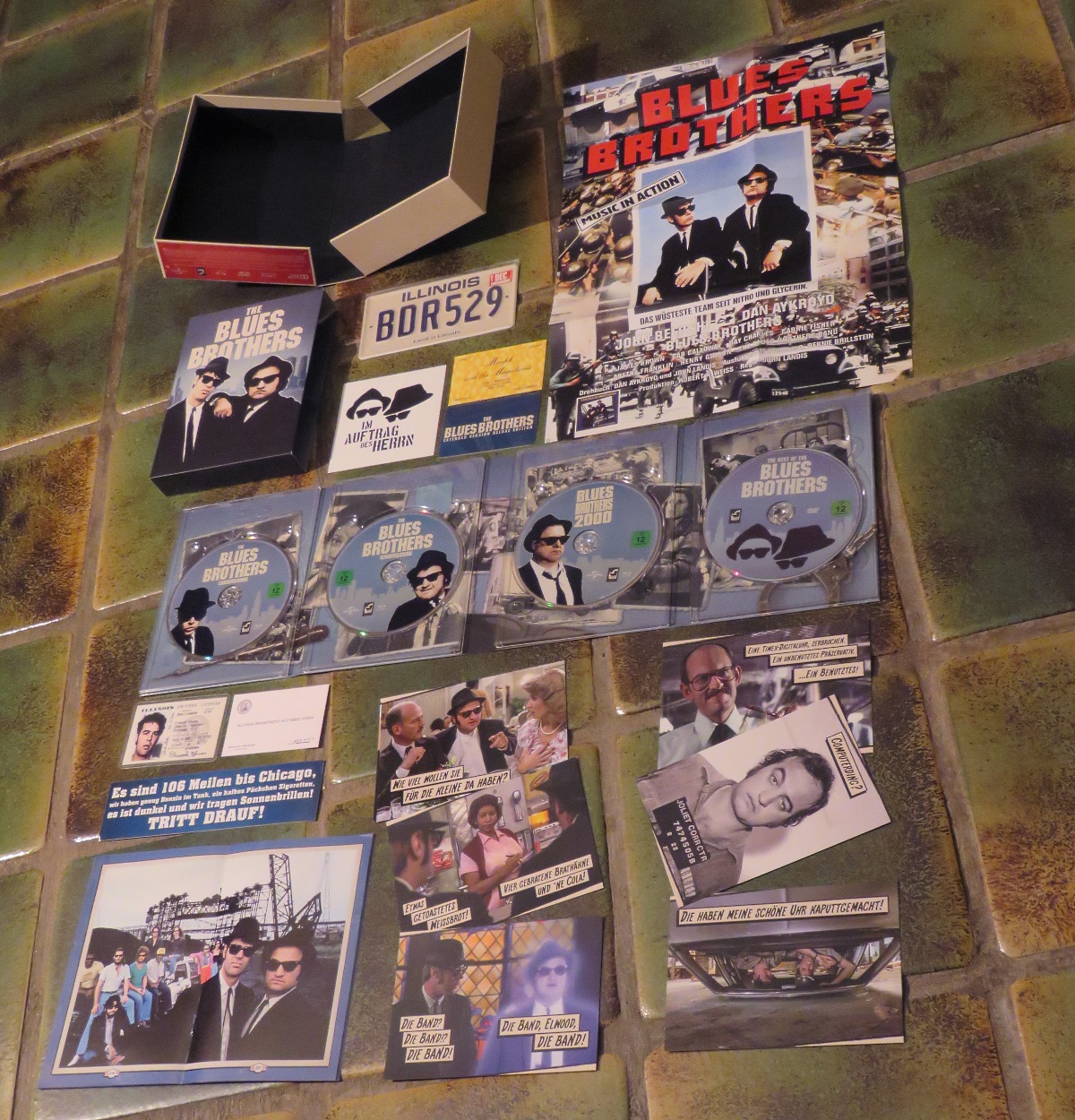 All contents opened, unfolded and spread out. It's fair to say the people who've made this have seen the light!

Come on, you're supposed to call those "features", or "films included in this boxset", not extras! 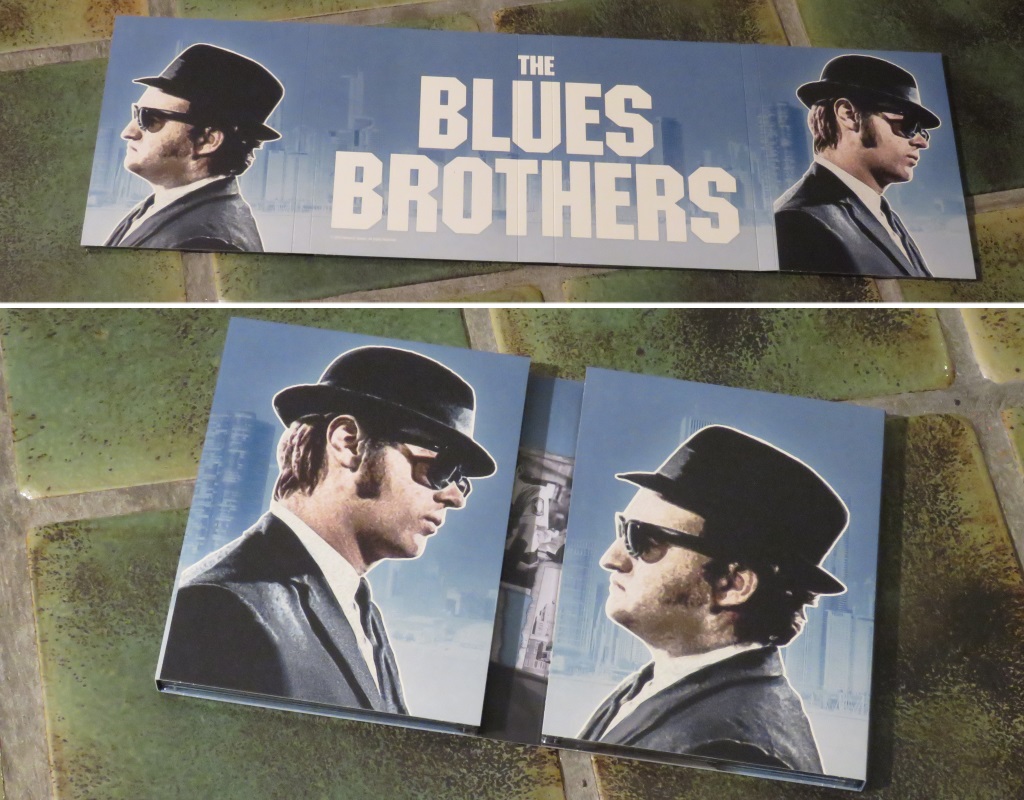 Clever, great artwork on the Digipak. 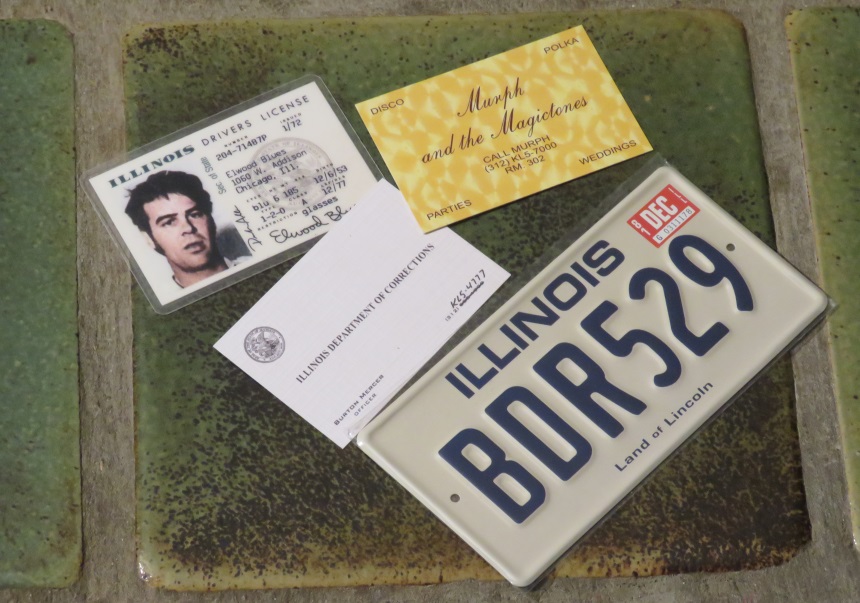 A close-up of some of the physical extras. Fans of the film can have a good chuckle about these. 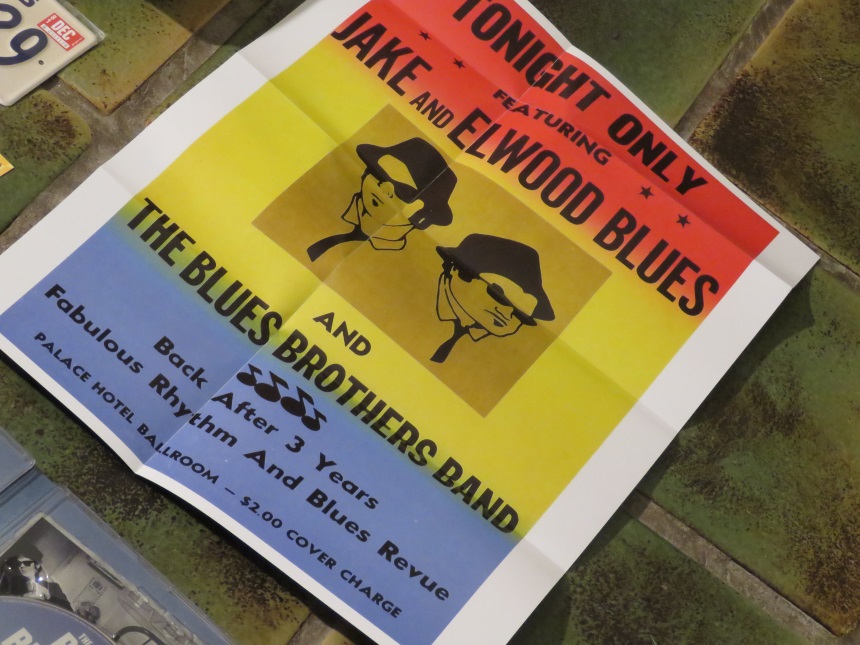 The reverse side of that poster shows a design taken straight from the film. 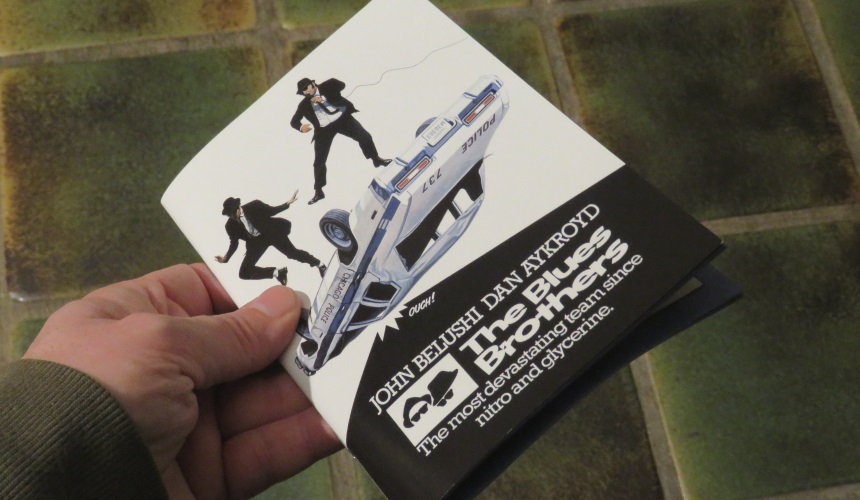 The booklet is 48 pages and pretty great, especially if you can read German.

There is a wealth of background information and poster art in there, as well as articles and details about the German dubbing process. 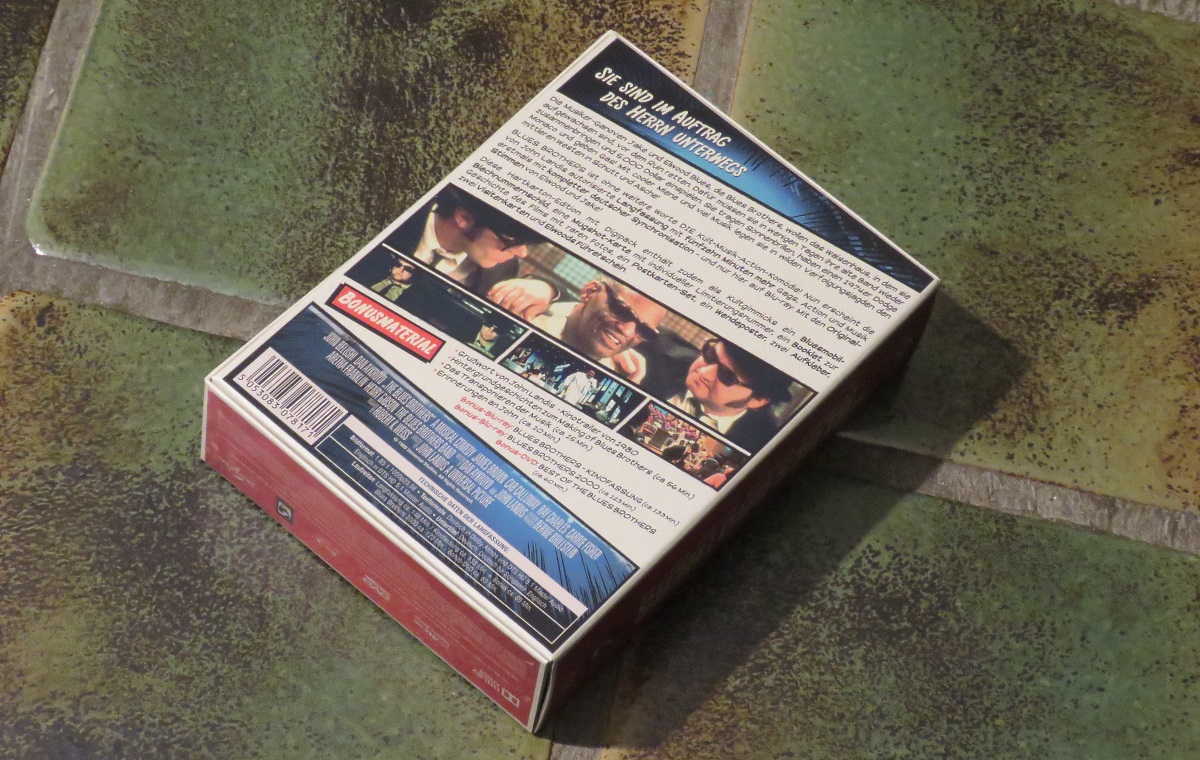 The (back) end. A great release for a great film!

Do you feel this content is inappropriate or infringes upon your rights? Click here to report it, or see our DMCA policy.
Dan AykroydJohn BelushiJohn Landis

More about The Blues Brothers