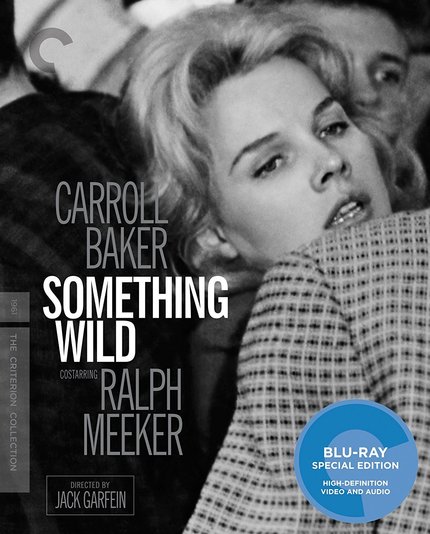 There are so many reasons to recommend Something Wild (1961) to today's audiences that it becomes difficult to choose one.

It is as timely and disturbing as the day that it was made and equally as insightful about sexual assault. Yet it is also challenging in ways that invite viewers to think long and hard before discussion. Such complexity` is also reflected in the way the film uses the form to tell its story. Beautiful cinematography by Eugene Schüfftan, a breathtaking opening title sequence from Saul Bass, and an evocative score by the legendary Aaron Copeland signal Something Wild as an important, though largely forgotten indie film. But its haunting treatment of a difficult subject makes it a timeless classic. Kudos Criterion.

New York college student Mary Ann Robinson (Carroll Baker) is raped. She reflexively destroys her clothing and takes a bath where she vigorously scrubs every inch of her body, but keeps the attack a secret from her parents and tries to move on with a normal life. But the rape has changed her. A trip on the crowded subway provokes a panic attack and a ride home in a police car. Her strained relationship with her image-conscious mother, a prudish and self-absorbed woman, grows worse. On a whim she abruptly quits school, leaves home without a word and moves to a slum apartment on the Lower East Side populated by the people her mother loathes.

But she can no longer bear to be touched, not even by her female co-workers at her starvation wages job at a five and dime. She lives like a ghost, doing her best to avoid everyone around her until, weakened and depressed, she finds herself on a bridge downtown and begins to lean over the edge toward the sparkling water. In the nick of time she's grabbed by Mike (Ralph Meeker) and after some sympathetic conversation takes him up on his offer to let her get some sleep in his apartment while he's at work. She awakens to find herself his prisoner. Well fed, but informed that she is his "last chance."

What happens in that apartment makes good on everything that leads up to it. The city itself has loomed like a callous pressing down on soft skin. The people in it are blind and deaf, unable to see or hear Mary's cry for help. She has moved from one prison to another, and whether the film leaves her a prisoner will be for the viewer to decide.

Director Jack Garfein, who only made two motion pictures, was a founder of the directors class in the Actors Studio. He was also a Holocaust survivor. His complex moral portrait of all the characters in Something Wild reflects both a compassionate worldview marked by survival of an earth-shattering tragedy and an unwillingness to surrender art to anything less than the need to provide a view of, rather than judge, the human condition.

In the cast, familar faces emerge. Those who only remember Jean Stapleton from her role of Edith Bunker on the landmark 70s TV show All in the Family will be surprised to see her here as a slum-dwelling prostitute. Doris Roberts, who achieved her greatest fame on the sitcoms Everybody Loves Raymond and Seinfeld makes her screen debut here. But the film truly belongs to Meeker and Baker, who take their Actors Studio training and forge scene after scene of raw poetry, between two people who may or may not belong together.

•Behind the Method, a new interview with scholar Foster Hirsch on the Actors Studio

•Master Class with Jack Garfein, excerpts from a 2014 recording of one of the director's world-famous lectures on acting technique

•PLUS: An essay by critic Sheila O'Malley