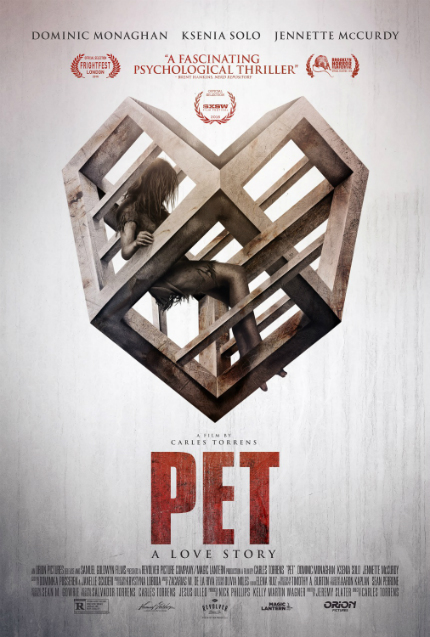 A woman is locked in a cage by a man who wants to change her. That's both a metaphor for too many modern relationships and the premise of a new film by director Carles Torrens (Apartment 143).

Seth (Dominic Monaghan), an animal shelter worker in Los Angeles, sees former schoolmate Holly (Ksenia Solo) on a bus one day and tries to rekindle their acquaintance. Holly politely declines but soon finds herself an object of unwanted attention from Seth. He tracks her down through social media and shows up at a restaurant where she works as a waitress. Holly, still dealing with the ramifications of ending a relationship that wasn't working out, is none too happy about Seth's increasingly pushy and demanding attitude, and tries her best to shut him out.

Nonetheless, Seth manages to kidnap Holly and ... drum roll, please ... locks her in a cage, conveniently located in the basement of the animal shelter. Seth informs the cowering Holly that he intends to "save" her, though he has no inkling toward religious redemption. Instead, he has something else in mind, something that is possibly more sinister and definitely more dangerous.

Pet is filled with twist, turns, and confined spaces. Add to that the idea of a young woman, clad only in her underclothing, being held captive in a dog cage under the control of a domineering and likely dangerous man, and all the ingredients for an outrageous, offensive thriller appear to be in place.

As I mentioned in our SXSW Preview, director Torrens' short film Sequence was quite impressive. It followed a man who wakes up to discover that everyone else in the world dreamed about him the night before. Torrens did not write his new film -- Jeremy Slater has that credit -- but the similarly outrageous premise stokes the narrative fires throughout the opening scenes of Pet.

Torrens makes the most of those confined spaces, so the film is never boring from a visual standpoint, and Solo makes Holly a captivating character, someone who must work hard to keep her emotions in check while dealing with a whole lot of trouble. She handles a tricky role with steadfast aplomb, keeping her character's personality traits within reach of reality.

For his part, Monaghan seems to enjoy playing against type, though his character, Seth, presents few surprises. Nearly every emotion remains on the surface. Reasons are sometimes given for his behavior, but he remains resolutely opaque.

Yet the script's stubborn reliance on twists ends up weakening its overall impact, especially as the story progresses. Without spoiling anything more, the twists push past the merely unlikely into a strange minefield of 'what in the world?' Pet raises a lot of questions about its lead characters without establishing a solid basis for the queries in the first place, and then declines to provide satisfying resolutions. Meanwhile, the tone and atmosphere remains in the mode of a straightforward thriller, which results in a disconnect between the material and how it's playing out on screen.

And after revolving around the offensive idea of a man caging a woman as though she were an animal, Pet also declines to fully consider or even comment upon the unsavory ramifications of that idea. To be clear, it's not just a cage, it's an instrument of terror; Holly can't even stand up. That's the aspect that probably bothered me the most, so I'm sure my personal reaction flavored my overall view of the proceedings.

Granted, the ambition is admirable, and Solo's performance, combined with Torres' lively direction, keeps things humming and always watchable. Pet stirs up strong emotions that are not easily caged, even if it doesn't play out as might be desired.

Do you feel this content is inappropriate or infringes upon your rights? Click here to report it, or see our DMCA policy.
Carles TorrensDominic MonaghanJennette McCurdyKsenia Solo