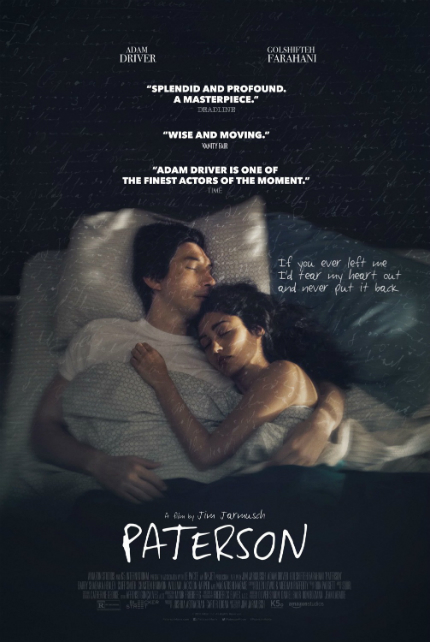 A driver named Paterson in a town called Paterson played by a man named Driver - the rhyming seems almost too perfect. Yet Jim Jarmuch's latest, a delicate, poetic, often delightful musing on creativity and the art of listening, is more than just a series of rhyming couplets. It's a film that echoes Jarmusch's past works like Dead Man and Ghost Dog, yet feels very much its own.

For a film where much of it takes place on mass transportation, there's a fair share of repetition, starts and stops, great moments of furious action, and then a lot of waiting around. It's also an exploration of expectations, about how to judge just who finds the beautiful in the simple things, who finds the words to express the ephemeral.

The casting of Driver works on other, deeper levels as well. Jarmusch added a backstory to the character based on Driver's own past, making the character a former military man. It makes his serene sense even more sublime, and accounts for a moment later in the film where he disarms a foolish friend. It's a way of defying expectations on another level, and works fantastically.

His partner in the film, Golshifteh Farahani, quite literally sees the world in black and while. Obsessively creating everything from decorated cupcakes to painted shower curtains, she adds a sense of delightful dualism to Paterson's life. His views are all gray, finding middle ground between the mediocre, the melancholic and the magnificent, while her dualism is a daffy counterpoint. Combined they're quite the couple, as engaging as any of the magic pairings that Jarmusch habitually crafts.

For many, however, it's a certain bulldog that steals the show. It's a gifted canine performer, to be sure (complete with black and white collar, of course), and what could come across as a silly addition actually plays critical parts of the storyline.

It's in Paterson's reaction to a well telegraphed tragedy that we find him at his most poetically serene. Capped with a nod to the Zen-like teachings espoused in Ghost Dog, we're treated to a cyclical narrative that finds our lead character finding further ways of continuing his quest, despite the ephemeral nature of worlds and expression.

With a quirky soundtrack shaped in part by Jarmusch along with a dream-like air, Paterson is infectious and fun, a quiet and capable work by one of the giants of American independent cinema. A fine contribution to Jarmusch's remarkable canon, Paterson proves to be a remarkable ride.

Review originally published during the Cannes Film Festival in May 2016. The film opens in select theaters on Wednesday, December 28.

Do you feel this content is inappropriate or infringes upon your rights? Click here to report it, or see our DMCA policy.
Adam DriverGolshifteh FarahaniJim JarmuschNew JerseyPaterson