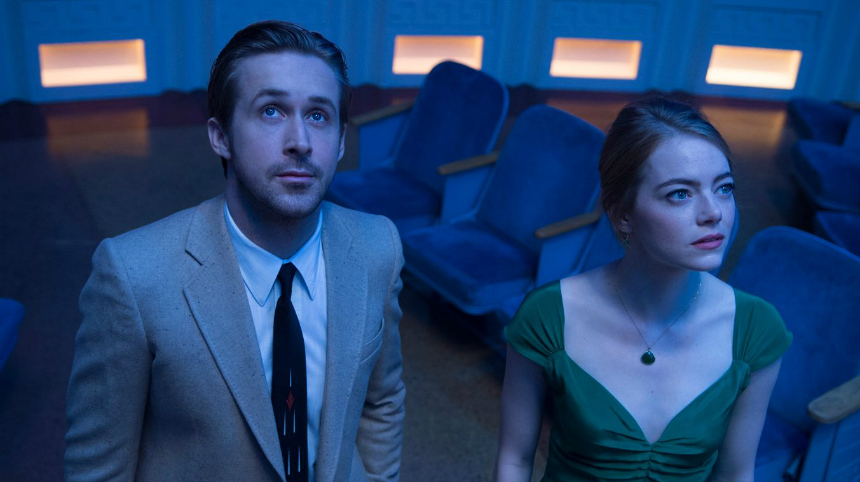 La La Land is a series of dichotomies, existing as both a delightful flight of fancy and a broad relationship drama. It’s a film oozing with both nostalgia and contemporary energy, feeling both classic and of the moment in the way that great films can.

A follow-up to the lauded Whiplash, director Damien Chazelle takes references from classic films – Weekend, The Sound of Music, Rebel Without a Cause, Umbrellas of Cherbourg – and like the masters of jazz, uses these elements as motifs to build a new and original tune. The chord changes may be familiar, but the tune variates in twists and turns that feel as fresh as the briskest improvisation.

Ryan Gosling plays Sebastian, a talented piano player with a deep passion for Jazz who finds himself plodding away tinkling out holiday carols for a straight-ahead manager (played by J.K. Simmons, the anchor of Chazelle’s last work). Obsessed with opening his own club, Sebastian’s path is blocked while his music is being neutered, made miserable by how far away his dreams are from realization. Enter Mia (Emma Stone), full time barista and aspiring actress who is drawn in to the club by a momentary outburst of improvisation and finds herself inexorably drawn into his orbit.

As the tale unfolds, we see the playful connection between the two flourish into something special, only to find turmoil as each attempts to follow their muse. She’s dealing with rejection while he’s dealing with the draw of conformity. The lure of the safe and predictable constantly overshadows their own drive to be authentic.

As this dance of desires both emotional and artistic grows more complex, so does the film, swirling around them like a dramaturgical waltz. 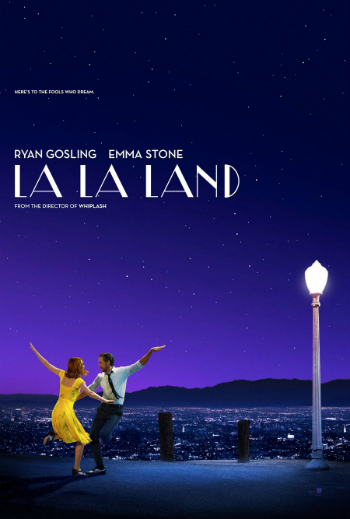 Along the way, Chazelle’s graceful camera work is thrilling, his timing impeccably tied to sumptuous images that are as delightful as the leads on screen. In collaboration with his Whiplash musical collaborator Justin Hurwitz, the film’s score is the heartbeat of the work, pulsing with energy and emotion. With songs that feel like standards tied to graceful yet occasionally cheeky choreographed numbers, the filmi is unabashedly a musical in the traditional sense. Yet the film adds some of the same sophistication that drove Chazelle’s previous film, using the heightened aspects of the genre to buttress human emotions.

We’ve got scenes of dancing around lampposts and even a soaring ballet into the infinity of the celestial shroud mated with snarling LA traffic and the mundane magic of a studio lot. The film is not only an affectionate tribute to classic musicals, it’s very much a love letter to the very idea of Hollywood, the title itself a sing-song play on the home of Angelinos. In the land of La La, things never quite go according to plan, the simple happy ending may be just a bit out of reach. Yet the dream remains real and if only for a moment the feeling of that deep, rapturous connection can be shared.

Stone and Gosling are sublime, inhabiting their characters supremely well. Both play with being charming and obnoxious, crafting a complexity that’s even more energizing. Together, they sing and dance with a laudable capacity that still feels naturalistic rather than over-rehearsed. If casting is the cornerstone of any great work, these two were an inspired choice.

Yet it’s the core of the narrative that propels the film, another way of articulating what surely must be one of Chazelle’s obsessions – can something ephemeral, such as love or music, be celebrated without stultifying what makes it special, while at the same time evolving without losing what made it special in the first place. The journey of the film explores this dynamic, finding a way to mourn what could have been while respecting the notion that one drowns if one stops swimming forward.

La La Land firmly establishes Chazelle as a true talent, crafting a highly personal film that speaks not only to our sense of romance but also to notions of the ephemeral and the sublime. A captivating treasure of a film, La La Land will make your heart and your head sing in praise.

Review originally published during the Toronto International Film Festival in September 2016. The film opens in select U.S. cities on Friday, December 9 and then in additional cities on December 16.

Do you feel this content is inappropriate or infringes upon your rights? Click here to report it, or see our DMCA policy.
Damien ChazelleEmma StonemusicalRyan Gosling