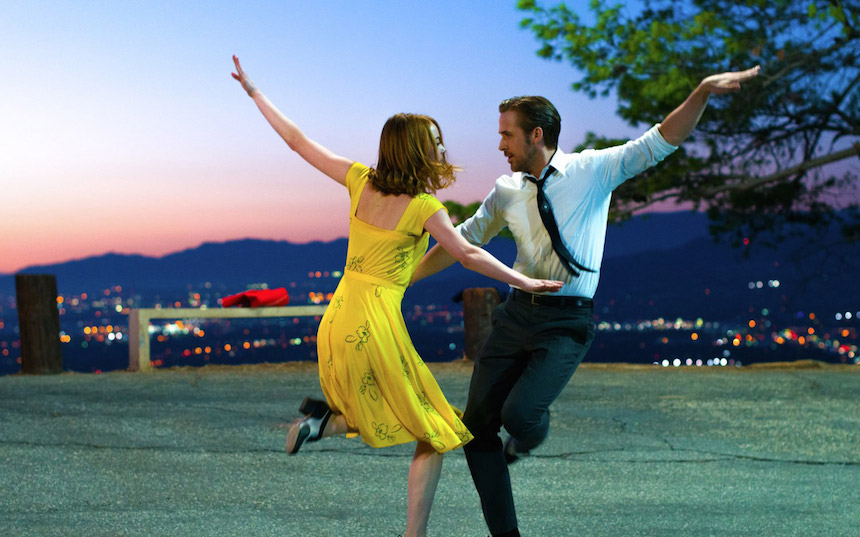 Watching La La Land, for me, was accompanied by a sinking feeling, a pronounced "of course"-ness, a sensation halfway between grudging admiration and simple exhaustion at the obviousness of it all.

Not the obviousness of La La Land itself - it's not as on-the-nose about what it's trying to do as, say, Hidden Figures; nor is it as beguilingly subtle as Moonlight - but rather the brazenness of the whole enterprise. We talk about "Oscar bait" a lot and whether or not the moniker is fair; more thoughts on that another time, perhaps. But if any studio or filmmaker ever intentionally baited a hook with the exact size, shape, and flavour of worm that the Academy of Motion Picture Arts and Sciences will have no instinctive choice in its tiny lil' fish-brain but to devour, La La Land is it.

Mind you: this isn't even to knock the work! The work is fine! La La Land is technically impeccable and contains an absolute honey of a final movement, and it's next to impossible not to like it at least a little bit.

At least, it's next to impossible not to like it if you're part of the dominant hegemony, i.e. the white people. I can't speak for any other vantage point on this one, but boy, La La Land is one hell of a movie about how amazing it is to be white, pretty, and impassioned (I am at least 2 of the 3) in Los Angeles (I am in Toronto).

It is a film where the aching history of jazz is represented by white Ryan Gosling with nary a black person in sight, because of course it is. (The only significant, supporting person of colour in the film is John Legend, who is there to rep a nu-jazz electronic monstrosity that the white characters all consider beneath Gosling's talents.)

It's a film where Emma Stone, bless her, is a struggling actress trying to make it, who doesn't gain any traction until she does whatever the opposite of "selling out" is ("underselling in?"), playing a one-woman show to an empty house, an act which somehow catapults her to the very top of Hollywood's A-list. (So, Emma Stone territory.)

It's a film where the rhythm, facades, and glamour of a Golden Era Hollywood musical invades the story of these two shmucks and, while not entirely saving the day per se, at the very least reminds us how fucking magical and romantic everything actually is. In the aforementioned final movement, Emma and Ryan watch their entire history unfold once again in an entirely musical alternate timeline where everything is wonderful and nothing hurts, before dropping back to their (albeit successful) real lives where they took an alternate path. It is literally a movie about how movies are better than life.

So, of course it's the movie that will win Best Picture.

Let's attend briefly to all the usual caveats: Oscars are meaningless, the Oscars themselves are an industry trade show (i.e. a group of industry professionals giving awards to themselves and their friends), and none of this actually matters.

But a year after the second coming of #OscarsSoWhite, and having done a better-than-average job this time of noticing that films like Moonlight and Hidden Figures and 13th and I Am Not Your Negro and Fences exist, La La Land is still the movie that will sail down the middle and win the lion's (no pun intended) share. Here's why:

And if it happens to offer this reassurance in the guise of a throwback Hollywood populated near-entirely with white people (and John Legend), to subtly reinforce that minorities remain minor, supporting actors continue to support, and it's an honour just being nominated - so shut up and be honoured, will ya? - so much the better.

I've watched the Oscars for a long time. When I was younger, I knew that "issue movies" were like candy to these people, because awarding an issue (and the movie around which it was built) made them feel good about themselves. It made them feel as though the movies remained a relevant part of the human arts. And maybe, as solipsistically as possible mind you, they were right.

But those days are past. Now, the goal isn't even to crowd around movies that make light work of heavy issues; it's an increasingly desperate attraction to something - anything! - that assures the ruling class that they're still ruling.

In the slow transition from rewarding good work because it makes them feel good about themselves, to rewarding okay work because it explicitly says that Hollywood itself is good, La La Land is the magnum opus.

Do you feel this content is inappropriate or infringes upon your rights? Click here to report it, or see our DMCA policy.
Damien ChazelleEmma StoneRyan Gosling