Review: A MONSTER CALLS Goes Through the Motions 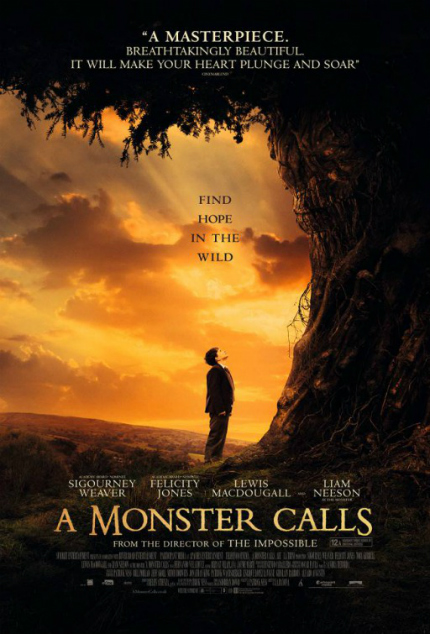 You might be able to argue that J.A. Bayona is not the most original filmmaker currently working today, but there is no denying that he has a masterful understanding of how to direct a film that will grab (almost) all of his audience by the heart and squeeze until it bursts.

His first feature film, The Orphanage, was a contemporary take on the gothic tale of ghosts and motherhood that left nary a dry or unfrightened eye in the house. His second, The Impossible, adapted the true story of a family caught in the 2004 tsunami. And with his latest, A Monster Calls, he heads back to genre to tell the story of a boy coming to terms with his mother's imminent death. On the one hand, the story of this boy is neither original not particularly compelling; on the other, there are some outstanding scenes and a genuinely heart-wrenching climax that might melt even the coldest of hearts.

Conor (Lewis MacDougall) looks after himself as his mother Lizzy (Felicity Jones) undergoes chemotherapy. Bullies at school and a difficult relationship with his grandmother (Sigourney Weaver) mean that Conor spends a lot of time drawing and living in his imagination. Thus comes a anthropomorphic Yew-tree monster (voiced by Liam Neeson) to talk Conor through his pain and anger in the form of old fairy tale stories.

Given its source material (a YA book by Patrick Ness), the film aims itself at a younger audience; that is to say, there is no covert subtext, the dialogue is neither particularly clever nor difficult to interpret, and the conclusion (it's okay to grieve and want the pain to end) inevitable. This does not necessarily always mean something negative; but in the case of A Monster Calls, the concentration on the exterior appearances means neglecting (or at least taking a long time to find) the heart. It feels like we are being presented a story, rather than asking us to be in the story. Obligatory scenes of Conor being bullied, of his mother ill with her treatment, of the difficult grandmother/grandson relationship; these presentations lack the necessary emotional impact.

When the Monster appears, it is refreshing; like an Ent on steroids, the Monster is a response to Conor's anger and sadness, and comes equipped to tell seemingly irrelevant stories to help Conor cope with his emotional upheaval. Neeson certainly has a voice to tell such stories, and indeed, the incredible animation of these tales is the best part of the film. Adrián Garcia and his team creating some spell-binding work, using watercolour style to tell these marvellous tales that really a lot more interesting than the main story. These tales, perhaps a bit too sophisticated for the intended child audience, are nonetheless captivating both in artistry and execution, and could stand on their own as short films.

Now, there really are no original stories anymore; in film, or any art form, all themes have been explored; what matters is either telling stories in a new way, or in an old way that still has meaning and can speak to its audience. This film has all the necessary ingredients for a successful family drama: It has the lost child, scared and alone, bullied and afraid of what is to come; a kind and caring mother; a distant but still human grandmother; the fantastical tree and its strange tales to help Conor come to terms with what he is feeling; a great score by Fernando Velázquez. The story itself is an important one for children and young people, who don't often have the emotional maturity or experience to process heavy emotions and situations.

So why does A Monster Calls lack impact? Perhaps it was only with me; I know of spectators who saw the film at previous festivals and loved it. And in the fantastical scenes, the film shines. This might be where Bayona shines: his understanding of how to use fantastic tropes to tell a story are undeniable, and like other directors such as Guillermo del Toro and Steven Spielberg, Bayona can tap directly into how children can often understand far better through stories than direct address. This could explain why Bayona's first film was a success and his second was not; high emotions work in the fantastic in a way that they don't in straight drama.

Currently a hit in in cinemas in Spain, A Monster Calls will no doubt find an audience when released in North America during the holiday season, and likely will find a healthy audience there as well. But it feels far more as if it is going through the motions than seeking to genuinely connect.

Originally published during the Black Nights Film Festival in November 2016. The film opens in select theaters in North America on Friday, December 23 and then opens wide on January 6.

Do you feel this content is inappropriate or infringes upon your rights? Click here to report it, or see our DMCA policy.
Felicity JonesJ.A. BayonaLewis MacDougallLiam Neeson