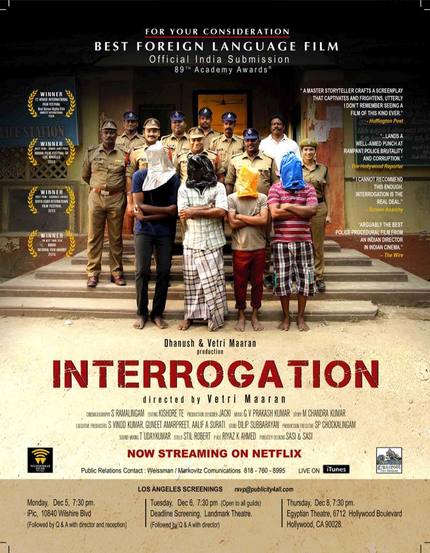 With the Academy Awards only a few short months away, this is a busy season for Los Angeles Academy members looking to whittle down thousands of choices in every category to just the few we see on the telecast. This year, that job is even more challenging in the Best Foreign Language Film category, as the Academy of Motion Picture Arts and Sciences (AMPAS) has received a record 85 official submissions from countries around the world, many for the first time.

One country with an incredibily rich cinematic history, but a terribly disappointing one at the Oscars, is India. Only three Indian films have ever made the Oscar short list - Mother India (1957), Salaam Bombay! (1988), and Lagaan (2001) - and none have won. However, this year director Vetri Maaran's Interrogation hopes to change that trend against some pretty intimidating odds, fighting a strong cultural bias against Indian films which frequently brands entries from the country as brash, musical melodrama.

Interrogation is none of those things. It is the true story of four Tamil migrant workers who are arrested and framed for a burglary they didn't commit. They endure painful and humiliating torture at the hands of the police, and eventually forced servitude just when they think they are free. It is a vicious endictment of Indian police brutality that has grown more universal as 2016 has placed police in other countries, especially the U.S., under a microscope for increasingly visible and questionable decision-making and violence.

I talked with Vetri Maaran on the eve of Interrogation's final U.S. screening at the American Cinematheque's Egyptian Theatre in Hollywood about the way his film has come to surprise and connect with American viewers over the last few months.

[Note: This is a part of the second interview of Maaran after our previous talk wasn't recorded properly, so several items we address are repeats of that prior chat. I've tried to note these instances where possible.]