Review: In VISARANAI, The Truth Will Never Set You Free 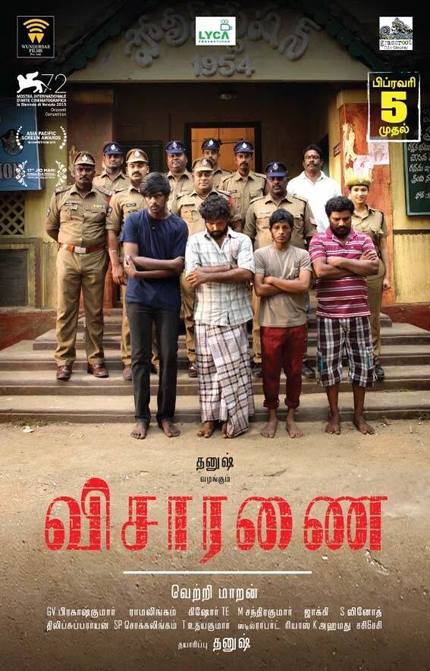 In 2012, two mob movies came out of India that really made me stand up and take notice. One was Anurag Kashyap's five hour, seventy year epic Gangs of Wasseypur, a Cannes favorite that went on to worldwide critical success. The other was Vetri Maran's low budget Tamil language, Madurai set Aadukalam, a story about a small time hood looking to grab his piece of the piece by any means necessary. Aadukalam did not go on to set the international festival circuit on fire, but those who saw it knew they'd seen something special. Not only was the film incredibly engaging and filled with well-defined characters, it also marked a massive star turn for Dhanush, a young man now acknowledged as one of India's greatest actors. After Aadukalam, Dhanush has gone on to great things, including an upcoming role in the new film from Persepolis director, Marjane Satrapi. Vetri Maran, on the other hand has stayed rather quiet choosing to write and produce, rather than direct. Until now.

Vetri Maran returns with a masterful story of corruption in Visaranai (Interrogation). The film begins in rural Andhra Pradesh, a Telugu speaking region of India, where a small group of Tamil speaking immigrants, considered foreigners in AP, have migrated to find work. Pandi, a young man who works at a corner bodega in town, is spontaneously arrested by a local policeman and taken into custody along with some of his fellow Tamil migrants. No sooner do these clueless migrant workers appear in the station, than the police inspectors begin ruthlessly beating them with lathis (canes) in an effort to make them confess to their crimes.

The only problem is that they've committed no crime, and more than just being innocent, they are completely ignorant of any crime having been committed in the first place, which compromises their ability to confess to anything. The first half hour of the film is a vicious cycle of beatings, torture, waterboarding, and various questionable interrogation techniques designed to break their spirits. It soon becomes clear to the detainees that they are playing the patsy for some other criminal simply because they are non-natives who won't be missed. While everyone of them is crying to be set free, and they're being promised their freedom in exchange for confessions, Pandi insists that they remain firm and stand upon their innocence. After all, if they are all innocent, they must be freed eventually right?

It seems like a solid idea, but Pandi and his comrades soon find themselves further and further up shit creek as the police grow weary of detaining them and the pressure builds to close the case for which they've been framed. Beyond the everyday torture, now there are mind games, hunger strikes, and promises of further vicious beatings.

The physical and psychic violence in Visaranai is brutal, visceral, and unavoidable. Each blow from the lathi leaves a scar, each kick from a boot leaves teeth missing, and each slap leaves a soul depleted. Then, just when it looks like Pandi and his friends are free from danger, they find themselves inserted back into the thick of it. This time, instead of a small time burglary, it's playing inadvertent witness to the kind of corruption that involves men in high places and the tools big shots use to shut each other up. The message is that no matter how powerful you are, no matter how much money you have, the system will find you, chew you up, and spit you out.

Vetri Maran has painted a beautiful picture of a very ugly world with VIsaranai. The film is gorgeously shot, expertly mounted, and very well acted. If I had any criticisms, they'd be the occasional digressions into the masala-esque love story that propels a small piece of Pandi's character arc, though they work in the context of providing a counter-point and illuminating the life Pandi led before his arrest. The story in itself isn't a foul, but the whiplash tonal shift from torture to salad days could've been handled better. Pandi, the lead and the man who refuses to give ground when he hasn't made any mistakes, plays as an impeccable sage, a man without fault, even under the harshest of circumstances he never breaks. Could any normal man allow himself to be pushed to this limit while being given options to cave in all along the way? Pandi does, and in the end, it's his firm constitution that both saves and destroys him and everyone around him.

I don't know that I have the words to describe the experience of Visaranai in the way that it deserves. There's a part of me that wants to believe that it is an exaggeration, a Kollywood sized portrait of a criminal justice system gone wrong. But with films releasing almost weekly that take on corruption in India and the utter incompetence of police (Talvar, Masaan, etc.), I really do believe that these films are trying to tell the world something, but no one outside of India seems to be listening.

Over the last decade it has become clear that Tamil cinema, out of all of the cinemas of India, is the most progressive and that its audiences appear to be the most welcoming of films like this that break the masala mold. With filmmakers like Vetri Maran and Bala attempting to stretch what is acceptable in commercial film, to filmmakers like Nalan Kumarasamy and Karthik Subbaraj who make commercial films that feel very international, to stalwarts like Mani Ratnam who has mastered the typical Indian romance and whose work stands as a beacon to anyone looking for what Indian cinema is and can be, Tamil cinema continues to prove that they are ready and willing to swing for the fences, and much of the time these high minded films are actually successful.

Visaranai brings a visceral tension to the screen that is sorely lacking in the cinemas of other regions of India. Vetri Maran is a force to be reckoned with, and hopefully it won't be long before the world casts its eye his way. I cannot recommend this film enough. Visaranai is the real deal.