Blu-ray Review: PRIVATE PROPERTY, A Gripping Noir Finally Gets Its Due 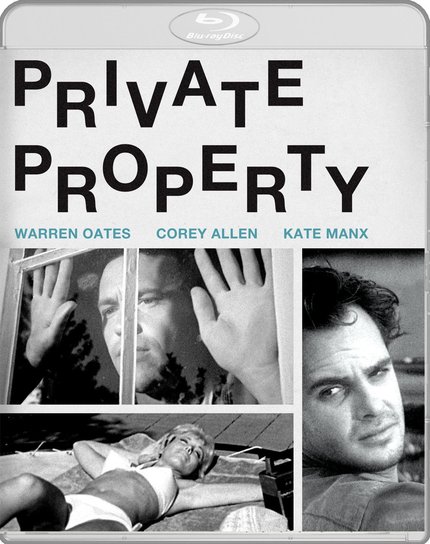 Leslie Stevens' 1960 film noir Private Property is an incredibly tense psychosexual thriller that is years ahead of its time.

Stevens was probably best known as the creator of the influential science fiction TV series The Outer Limits, but before that project got off the ground in 1963 he was a writer and director of a couple of feature films that didn't exactly set the world on fire. Private Property was his first in the director's chair and it is definitely a bold debut, even if audiences in the US didn't get to see it at the time.

Duke (Corey Allen) and Boots (Warren Oates) are drifters making their way down the Southern California coast when they spy a pretty young woman zooming down the freeway. After following her for miles and discovering that next to her house is an empty one, they decide to have a little fun and insinuate themselves into her life.

The young woman, Ann (Kate Manx), is a frustrated housewife left alone all too often by her salesman husband, who is at first hesitant at Duke's attention, but before too long begins to succumb to his greasy, salt-of-the-earth charm. However, when the pair of men with ulterior motives take their admiration a step too far, things all go pear shape in a shocking way.

Private Property is a film about longing, not the romantic kind, but the lustful kind that manifests itself sometimes in very aggressive ways. There is the longing of Duke, the greasy drifter who sees Ann and can't help but imagine himself doing horrible things with her. There is the longing of the virginal Boots, who has never been with a woman and cannot stand to be barren for much longer.

There is even, and perhaps most glaringly, the longing of Ann, a frustrated housewife who tries again and again to seduce her clueless absentee husband, but who is rebuffed at every turn. This simmering cauldron of lust has no choice but to reach a boiling point at which the whole thing bubbles over, and the climax of Private Property is astonishingly perverse in its execution.

While Private Property is notable as the first film of Warren Oates, one of Hollywood's greatest character actors, it is really Corey Allen who drives the film and controls its atmosphere. Allen, who is probably best known as the heel in Nic Ray's Rebel Without a Cause, is a seething beast of pent up lust and aggression. His ability to morph from this carnal monster into a loquacious, charming confidant to Ann's abandoned housewife is remarkable. He controls every situation he's in like a conductor with a symphony, and when he tells the film to play louder, it's almost deafening.

Oates, on the other hand, is a taciturn, frustrated man-child in his role as Boots. His inability to boast of his sexual conquests has scarred him deeply and his partnership with Duke has grown deeper over the years as Duke has sheltered and protected his friend. The relationship is quite similar to that of Lenny and George in John Steinbeck's Of Mice and Men, though considerably more sinister in its trajectory. Boots isn't the gentle giant, he's a dangerously violent man, whose instability is the monster that Duke must quell. It's not Oates' finest performance, but he does a great job with the material he's given.

The third member of this triangle is Kate Manx's Ann. Manx was director Leslie Stevens' wife at the time, and I can only imagine what that set must've been like as Stevens' directed her in these scenes of increasingly volatile sexual aggression. She plays the waif to Duke's beefcake with a certain sense of naivete mixed with the classic mid-century sense of duty care for this man who is down on his luck.

She's no fool, but she's also not bold enough, or perhaps she's not entirely eager, to wave off Duke's admirations, even if to her they are just harmless flirtations. When Duke begins to take things farther, she protests, but not too vociferously, until she's finally reached her limit, at which point Duke's facade crumbles and she realizes her life could be in danger.

The sexual politics in Private Property are fascinating. Duke and Boots hunt Ann as though her sex was their right. Ann establishes herself as a sexual being from the outset of the film, even though she is continually ignored by her chosen mate. The power moves back and forth between the men and Ann as she is first wary of them and later begins to enjoy Duke's attention, if only in a flirtatious way.

America wasn't ready for Private Property in 1960, but they are now, and it's one of the greatest discoveries of 2016.

Private Property comes to US Blu-ray from Cinelicious Pics in a gorgeous new 4K restoration created by their in-house team. The black and white cinematography from Oscar Nominated cinematographer Ted D. McCord (The Sound of Music), is exceptional in both its technical aspects and use of framing to tell a story. The restoration puts this film, whose elements were thought lost for decades, back in the spotlight and it does so with class. This restoration, like CinePics work on Belladonna of Sadness, is remarkable and deserves all the attention it can get.

There is only one significant extra, but it is definitely worth checking out. Most of the principal cast and crew of Private Property have passed on, but the team were able to talk to the set photographer, Alexander Singer, who is a great interview. Singer's memories of the set of Private Property as incredible in their detail of the working relationships between the actors and the director, the work of the cinematographer, and even some of the aftermath of the film's failure to secure a US theatrical run. It's only eighteen minutes long, but it is very much worth your time.

Every Cinelicious Pics release I've had the fortune of seeing has been well worth my time and Private Property is no exception. This is definitely a disc to add to your collection; it is highly recommended.