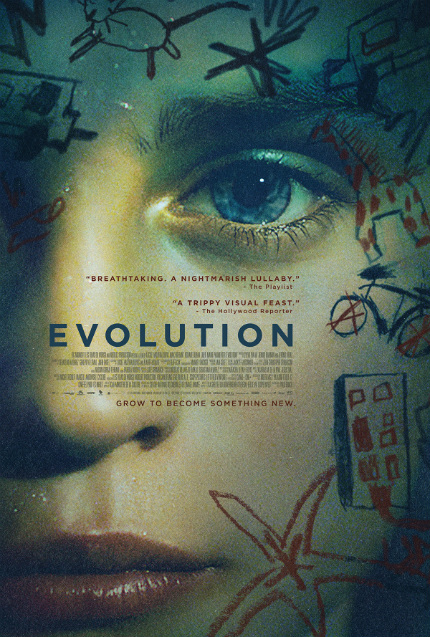 I'm a great believer in minimalism, particularly when it comes to body horror in film. Used carefully and deliberately, a few choice scenes can have far more weight in a story and a far more effective impact on the audience.

Add such horror to a surreal mystery, and bodies become even more frightening, made more fragile, seeming connected to the audience so that they feel the touches of both skin and knives. Such is the power of Lucile Hadžihalilovic's Evolution, a strange tale that forces the audience to discover its secrets through this horrific exploration of the body, its often alienness to others and to ourselves, in this strange fantasy.

Nicholas and five other young boys live on an isolated island, each cared for by a 'mother', and served by (or perhaps in service to) an odd health clinic, run solely by women. The boys are bathed daily, and frequently taken to the clinic, where they are subjected to strange injections and experiments. Befriended by one of the nurses, Nicholas quietly tries to investigate the true nature of the 'mothers' and the reasons behind his and the other boys' entrapment.

The film moves between the outside world, mainly the volcanic-sanded beach and the ocean, and the spartan austerity of the clinic. In the water, Nicholas finds some freedom, and cinematographer Manuel Dacosse (who also worked on Amer and Alleluia) creates a design that is both beautiful and terrifying. Colours of coral and fish stand out against the drab clothing of the children and women, an emphasis on Nicholas' imagination and also his child-like ability to see the truth that others ignore, whether it be a dead body or a starfish.

The daytime scenes contain this harsh beauty, while the night scenes reveal a sensuality that hints at a dark eroticism and other-worldly means of reproduction. The clinic is shot with minimal, stark light and shadows that still cannot conceal the horrible truth, and Hadžihalilovic frames both the children and the nurses as strange animals, the powerless and the powerful groping for answers. As stated, this feels like Nicholas', or a child's visual perspective; the places that he loves, fears, and does not understand.

The lack of exposition confirms the film's bizarre allegory, one that hints at ancient Greek mythology and the ways of biological conception. Any adult can seem to have god-like powers to a child, and while these women might not be gods, their strangeness and power renders them as more than care-givers. Their similar faces almost meld them into one (a representation echoed in a rather disturbing scene), making one wonder who birthed them, if they all came from the same parentage, left alone to fend for themselves and determine how to procreate.

The reversal of gender roles in this conception, while at the same time acknowledging the physical differences between male and female roles in conception, makes the body horror especially eerie, and allows for viewing how women's bodies are seen by many cultures as property, especially when it comes to bearing children. Are women's bodies truly god-like because we carry and birth offspring? How does creation separate men and women? In a telling scene, the nurses watch a video of a caesarian section. Unlike most body horror in film, which is predicated on things not likely to happen (or so we hope), this body 'horror' is a common occurrence, and not horrific per se were it not for the context. Hadžihalilovic presents it as yet another alien concept, fascinating to the nurses for whom the concept of natural childbirth is apparently unknown.

It's been 10 years since Hadžihalilovic's last feature film Innocence, and her gifts as a writer and director have grown, as has her exploration of the nature and existence of women's bodies in a world in which that existence is exploited and controlled. Hadžihalilovic wraps the story in an enigma of the mythological, at the same time stripping away indulgences too often found in films with body horror, to more closely examine the body horror that eludes most male directors.

Review originally published during the Toronto International Film Festival in September 2015. The film will open in select U.S. theaters on Friday, November 25 via IFC Midnight.