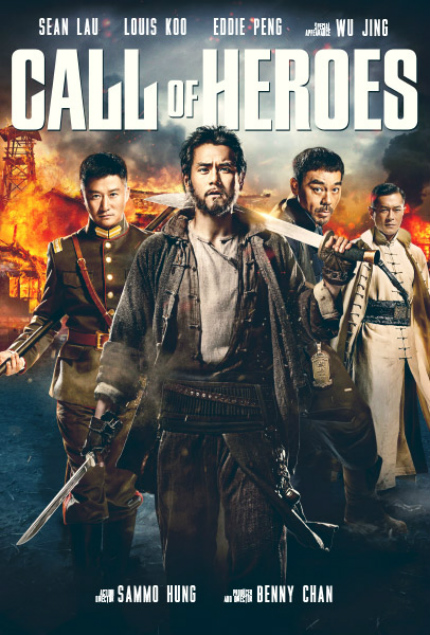 It's not like they're standing inside a cafe tossing jars at each other. No, they're stationed amidst thousands of jars and are fighting each other in and against this background that is ready at any moment to come tumbling down around them.

It shouldn't work, but the actors are convincing and the fight choreography is convincing and by that point of the movie, it's a perfect setting for the characters to duke it out. They're longtime friends who still respect each other, but now find themselves an opposite sides and there is nothing left for them to do but to fight. And fight they do.

In our exclusive clip, we see a bit of that epic battle before going behind the scenes to see how Eddie Peng and Wu Jing, who'd never met before -- ?! -- managed to portray lifelong friends.

Call of Heroes is a callback to the classic era of Hong Kong action movies. Here's the synopsis:

Louis Koo stars as Cao, the spoiled son of a powerful General who has grown into a vicious and depraved warlord. Although Cao is accused of triple murder, his father will destroy the town if his son is convicted and sentenced to death. But injustice cannot go unanswered, and the villagers prepare for the repercussions of punishing a guilty man.

The video below is a great clip from a great movie that's now available to watch in the U.S. via a variety of Video On Demand platforms. So ... watch the clip, and then rent and/or purchase the movie on VOD, or else watch the clip and then place your order for a DVD or Blu-ray, both of which will be available on December 6. And then watch this clip again.