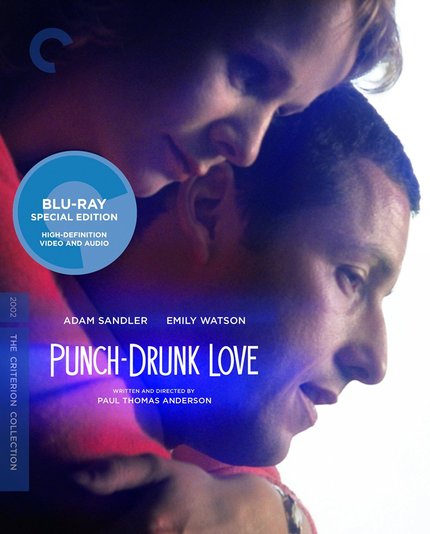 Shot through with affection and pathos to spare, the fact that the entire picture wears its sensitivities on its sleeves benefits the sly central conceit, that this is Anderson's Adam Sandler movie.

Prone to fits of repressed sexuality and pent-up anger, Sandler's Barry Egan is a frightened little puppy dog in a nice blue suit.  He mumbles hesitantly through life, his desire to get away more than subtly hinted at in the story.

Sandler's oblong headed appearance and established man-child shtick make him perfect for the part.  But beyond the sheer unlikeliness of Adam Sandler starring in a P.T. Anderson flick, there's the lark of Anderson actually making one.  While he strips away the usual Sandler movie broad comedy, amateur aesthetics, and Rob Schneider, he maintains and even humanizes the shared central core traits of the actor’s previous characters.  And he's done it very much his way.

As the former SNL comic’s superstardom had reached fever pitch by the time of Punch-Drunk Love (2002), his fans didn't seem to have much use for it.  Well-received by film buffs - and pretty much only by film buffs - the movie came and went.  Even Sandler seemed dead-set on distancing himself from this quirkfest once it failed to ignite the box office the way The Wedding Singer or even Happy Gilmore did.  But no one who's seen it has ever forgotten it.  Criterion, in their infinite wisdom, saw fit to give their top treatment to this important classic and contemporary film. 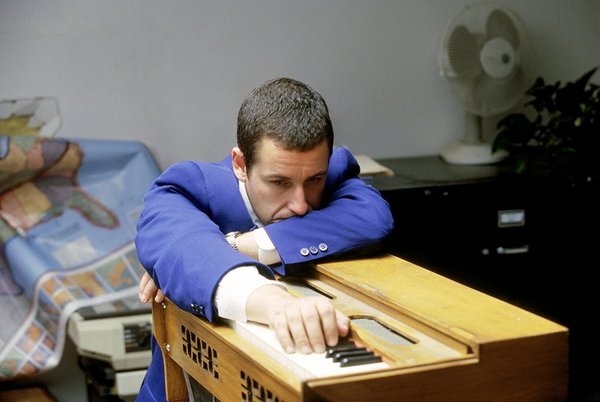 The music is its own thing, and it's brilliant.  Surging with an amazing avant-garde score courtesy of Jon Brion, Punch-Drunk Love scatters, shuffles, and purcusses; the camera all the while gliding elegantly through mundane space.  It perfectly compliments the bold choice to incorporate the work of gallery artist Jeremy Blake, whose full-screen colorful asides wash over everything, extending somehow even into the lens flares.

Wham! Thud!  Over and over again, Adam Sandler unexpectedly falls down hard or walks into a closed glass door or runs into something.  n these moments, the gentle aesthetic grace notes surrounding them are forcefully, if hilariously, shattered. But the thing is, in the hands of P.T. Anderson, these shattering occurrences are also equal grace notes.

Emily Watson, especially prominent then as a prestigious actress, proves a curiously perfect love interest for the lonely and volatile Sandler.  She brings a mousy assurance to her character, "The Girl" of the piece. Artist and filmmaker Miranda July praises Watson's luminous and leveling presence In her published essay, which is included, specifying “her face and breasts and nipples..."

Wait, what...?  I don't remember any...  Oh wait.  The fantastic Blu-ray high definition image clarifies everything from the moment Watson shows up wearing her fitted pink sweater.  July might be onto something.  In any case, without Watson's inspired casting and presence, Punch-Drunk Love would be a lot less radiant. 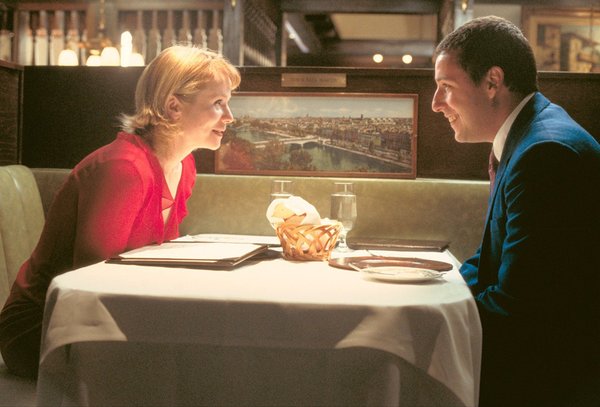 And Shut Up!!  Philip Seymour Hoffman as the villainous, threatening self-esteem challenged Mattress Man is yet another thing to behold.  No matter how many times one has seen this movie, seeing one of the all-time greatest actors do something completely new.  And don't miss the quick "Mattress Man" bonus feature, to really see Hoffman in action.

Other bonus features include everything from Sony’s original 2002 two-disc DVD set, and then some newly produced material.  Among the new material is a twenty minute conversation about late artist Jeremy Blake by a couple of prominent art curators, a great interview with composer Jon Brion, a vintage NBC News interview with the real-life man who inspired Barry Egan’s pudding quest, a 2002 Cannes Film Festival press conference, and more.

This new Blu-ray is a brilliant tribute to the film and its small celebration of any lingering beauty in the stark desolation of this world, the low level industrial microcosm Egan comes from.  It’s a microcosm where hoarding pudding snacks from grocery store shelves in order to attain frequent flier miles via an on-package promotion makes solid sense.  A microcosm where doing that might just pay off.  A microcosm where someone leaves a small piano on the side of the road.  A small piano calling for the main character.  Play.  Dance.  Look to the future.  Skitter on.

The images in this review are not representative of the actual Blu-ray’s image quality, and are included only to represent the film itself.

Do you feel this content is inappropriate or infringes upon your rights? Click here to report it, or see our DMCA policy.
Adam SandlerCriterionEmily WatsonPaul Thomas AndersonPunch-Drunk Love