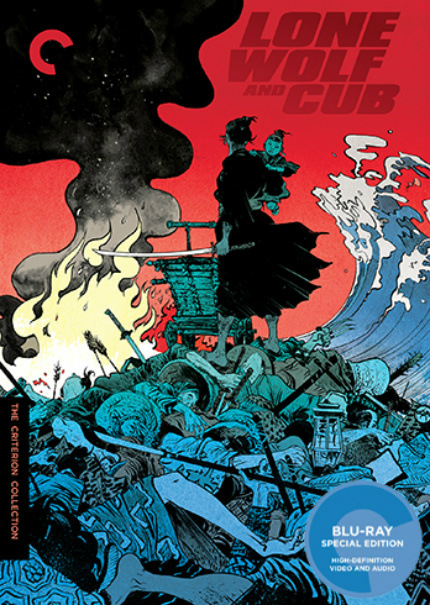 Ah, November. Here in North America, the weather cools off, critically-acclaimed movies flood the theaters (in some cities) and Criterion delivers some tasty titles.

The bounty begins with the classic Lone Wolf and Cub series, which combines an assassin and a baby for a most unusual 'buddy cop' saga. The new box set features new 2K restorations.

Paul Thomas Anderon's first entry in the Criterion Collection, Punch-Drunk Love, is his followup to Magnolia and is what may safely be called (by me) the least romantic and most harrowing romantic comedy in recent memory. Adam Sandler stars, for maximum discomfort. The disk features several intriguing new features.

Marlon Brando's One-Eyed Jacks has always proven perplexing to me, though I know many appreciate its odder dimensions. It's a uniquely weird Western; the restoration was supervised by Martin Scorsese and Steven Spielberg.

Read on for more details about Akira Kurosawa's Dreams, and Noah Baumbach's The Squid and the Whale, which I pretty much hated (your taste may vary). Verbiage provided by the Criterion Collection.

Based on the best-selling manga series, the six intensely kinetic Lone Wolf and Cub films elevated chanbara to bloody, new heights. The shogun's executioner, Itto Ogami (Tomisaburo Wakayama), takes to wandering the countryside as an assassin -- along with his infant son Daigoro (Akihiro Tomikawa) and an infinitely weaponized perambulator -- helping those he encounters while seeking vengeance for his murdered wife.

Delivering stylish thrills and a body count that defies belief, Lone Wolf and Cub is beloved for its brilliantly choreographed and unbelievably violent action sequences as well as for its tender depiction of the bonds between parent and child.

SPECIAL EDITION BOX SET FEATURES
New 2K digital restorations of all six films, with uncompressed monaural soundtracks on the Blu-rays
High-definition presentation of Shogun Assassin, the 1980 English-dubbed reedit of the first two Lone Wolf and Cub films
New interview with Kazuo Koike, writer of the Lone Wolf and Cub manga series and screenwriter on five of the films
Lame d'un père, l'âme d'un sabre, a 2005 documentary about the making of the series
New interview in which Sensei Yoshimitsu Katsuse discusses and demonstrates the real Suio-ryu sword techniques that inspired those in the manga and films
New interview with biographer Kazuma Nozawa about filmmaker Kenji Misumi, director of four of the six Lone Wolf and Cub films
Silent documentary from 1937 about the making of samurai swords, with an optional new ambient score by Ryan Francis
Trailers
New English subtitle translations
PLUS: A booklet featuring an essay and film synopses by Japanese pop culture writer Patrick Macias

Unfolding in a series of mythic vignettes, this late work by Akira Kurosawa (Seven Samurai, Ran) brings eight of the beloved director's own nighttime visions, informed by tales from Japanese folklore, to cinematic life. In a visually sumptuous journey through the master's unconscious, tales of childlike wonder give way to apocalyptic visions: a young boy stumbles on a fox wedding in a forest; a soldier confronts the ghosts of the war dead; a power-plant meltdown smothers a seaside landscape in radioactive fumes. Interspersed with reflections on the redemptive power of art, including a richly textured tribute to Vincent van Gogh (played by Martin Scorsese), Akira Kurosawa's Dreams is both a showcase for its maker's imagination at its most unbridled and a deeply personal lament for a world at the mercy of human ignorance.

Chaos lurks in every corner of this giddily off-kilter foray into romantic comedy by Paul Thomas Anderson (There Will Be Blood, Boogie Nights). Struggling to cope with his erratic temper, novelty toilet plunger salesman Barry Egan (Adam Sandler, demonstrating remarkable versatility in his first dramatic role) spends his days collecting frequent-flyer-mile coupons and dodging the insults of his seven sisters. The promise of a new life emerges when Barry inadvertently attracts the affections of a mysterious woman named Lena (Emily Watson), but their budding relationship is threatened when he falls prey to the swindling operator of a phone sex line and her deranged boss (played with maniacal brio by Philip Seymour Hoffman).

Fueled by the careening momentum of a baroque-futurist score by Jon Brion (Eternal Sunshine of the Spotless Mind, Magnolia), the Cannes-award-winning Punch-Drunk Love channels the spirit of classic Hollywood musicals and the whimsy of Jacques Tati into an idiosyncratic ode to the delirium of new romance.

A western like no other, One-Eyed Jacks combines the mythological scope of that most American of film genres with the searing naturalism of a performance by Marlon Brando (On the Waterfront, The Fugitive Kind), all suffused with Freudian overtones and male anxiety. In his only directing stint, Brando captures the rugged landscapes of California's Central Coast and Mexico's Sonoran Desert in gorgeous widescreen, Technicolor images, and elicits from his fellow actors (including Karl Malden and Pina Pellicer) nuanced improvisational depictions of conflicted characters.

Though overwhelmed by its director's perfectionism and plagued by production setbacks and studio re-editing, One-Eyed Jacks stands as one of Brando's great achievements, thanks above all to his tortured turn as Rio, a bank robber bent on revenge against his one-time partner in crime, the aptly named Dad Longworth (Malden). Brooding and romantic, Rio marks the last, and perhaps the most tender, of the iconic outsiders Brando imbued with such remarkable intensity throughout his career.

SPECIAL EDITION FEATURES
New 4K digital restoration, undertaken with the support of The Film Foundation and supervised by filmmakers Martin Scorsese and Steven Spielberg, with uncompressed monaural soundtrack on the Blu-ray
New introduction by Scorsese
Excerpts from voice-recordings director and star Marlon Brando made during the film's production
New video essays on the film's production history and its potent combination of the stage and screen icon Brando with the classic Hollywood western
Trailer
PLUS: An essay by film critic Howard Hampton


THE SQUID AND THE WHALE

With excruciating honesty, The Squid and the Whale chronicles the experiences of two young brothers growing up in 1980s Park Slope, Brooklyn, as they navigate the jagged contours of the divorce of their parents, both writers. The acclaimed third feature by Noah Baumbach (Kicking and Screaming, Frances Ha) marked a critical development for the filmmaker as he turned toward an increasingly personal style-a move that garnered him an Academy Award nomination for best original screenplay.

Shot in Super 16 mm and featuring a quartet of nuanced, understated performances from Jeff Daniels (Something Wild), Laura Linney (Mystic River), Jesse Eisenberg (The Social Network), and Owen Kline, this comic and poignant drama, peppered with autobiographical elements, deftly captures the heartache and confusion of a fracturing family.

More about Lone Wolf and Cub