Review: DESIERTO, Some of the Most Exciting Cinema This Year 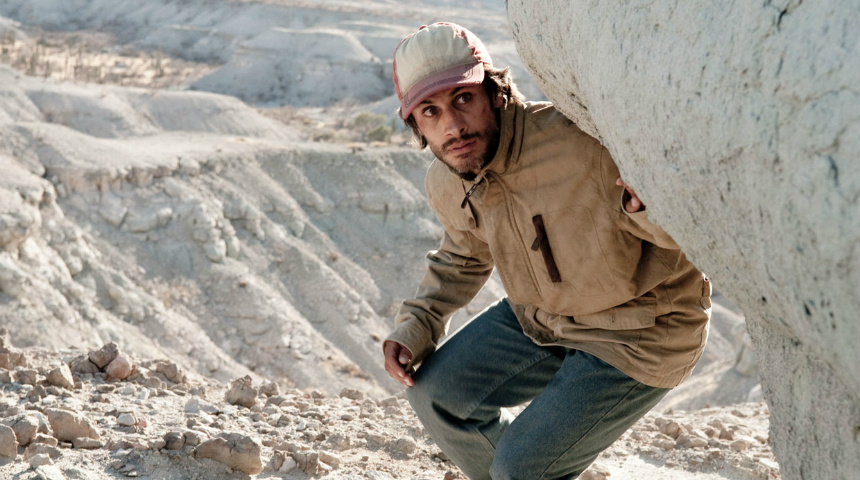 Having learned a few tricks working on his father’s multi-award winning space thriller Gravity, Jonas Cuarón brings the action down to earth to craft a similarly intense tale of human survival.

The idea of putting up a wall between Mexico and the United States of America continues to surface, thanks in large part to one particularly notorious presidential-candidate. Beyond all the bluster and politics lies the very real issue of desperate people being forced to make a perilous journey into an unknown land. In Desierto, Jonas Cuarón gives voice to the men and women who risk that path, constructing a taught and brutal story of survival.

In Mexico, a rickety truck sputters across the desert before its engine inevitably gives out. Its occupants, immigrants being transported into the US, are forced to take an alternate and unknown route on foot. Crossing a border fence consisting of just three lines of barbed wire turns out to be the easiest part of their journey.

For one man (Jeffrey Dean Morgan) this is a crime that can’t go unpunished. Armed with a high-powered rifle and his well-trained dog, this patriot is going to take out the Mexican menace with extreme prejudice. Gael Garcia Bernal and a rapidly diminishing group of companions must scrabble for survival against their deadly assailant while navigating an unforgiving desert environment. Welcome to America.

No one plays a whisky-swilling, gun-toting, patriot loon quite like Jeffrey Dean Morgan. This is what The Walking Dead’s Negan may have been before the zombie apocalypse. It’s what The Comedian could have been on return from Vietnam if a government job in a cape wasn’t waiting. But this is no comic book villain.

Morgan imbues his character with a level of barely concealed rage and pain that is only allowed to simmer to the surface in the brief moments of respite the film allows. Even so, it’s hard to care what his issues are once the bodies start dropping. Like his nemesis, Gael Garcia Bernal’s protagonist threatens two-dimensionality: he’s handsome, heroic, waits around for the weaker members and carries a teddy bear for his son. Yet it’s the moments of panic, foolishness and rabbit-in-headlights fear that highlight his riveting performance and the minor exchanges that give his character weight.

Once the hunt begins, Desierto gets intense fast and never lets up. With a sniper's crosshair planted on their heads and a ferocious dog is on their trail the hunted few must scramble up cliff faces and down ravines, across jagged, rocky outcrops and through vicious spiked cactus patches with death hanging over them. Matching Gravity for pace and punctuated by moments of brutal violence Cuaron weaves a savage trail towards a truly heart-stopping finale.

While the director gives us a clear view of the killer and his motives, to the people fighting for the lives he remains at a faceless distance. Unknowable and seemingly unstoppable the man, and his monstrous dog, terrorise their powerless quarry. Tapping into basic human fears and ratcheting up the tension towards an agonising climax, Desierto delivers some of the most exciting cinema to be seen this year.

Review originally published during the Neuchatel film festival in July 2016. The film opens in select theaters in the U.S. on Friday, October 14.

Do you feel this content is inappropriate or infringes upon your rights? Click here to report it, or see our DMCA policy.
FranceGael Garcia BernalJeffrey Dean MorganJonas CuaronMexico