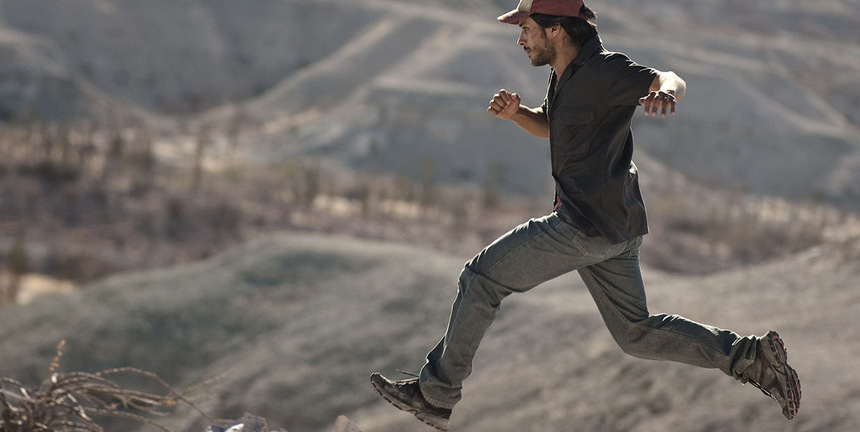 To say expectations were high for Jonas Cuaron's Desierto is a drastic understatement. Cuaron already had the weight of family ties on him, being the son of hugely acclaimed director Alfonso Cuaron and those pressures were only intensified thanks to the younger Cuaron's integral involvement in his father's Gravity, which he co-wrote. Would he be able to step out from his father's shadow and stand on his own terms? In short, yes.

Cuaron cast Gael Garcia Bernal as the lead in his debut feature, the taut thriller Desierto in which Bernal plays a Mexican migrant hunted through the desert while attempting to cross illegally into the United State. Says the director about his debut:

DESIERTO marks a particularly personal journey in storytelling for writer, director, editor and producer Jonás Cuarón who spent the last 7 years bringing the story of the migrant experience to the screen. In his own words: "I took a trip through the U.S. Southwest where I encountered first-hand stories surrounding immigration and the often cruel and violent story of the migrant journey. I was very moved and immediately felt compelled to outline the film - which happened even before writing GRAVITY. I've always been very interested in the concept of films like Spielberg's DUEL, Konchalovskiy's RUNAWAY TRAIN and Bresson's A MAN ESCAPES. They are non-stop nail biting thrillers with very little dialogue but that at the same time manage to juggle various themes. I was very interested in the drive of these films where the audience connects with the story and character in a very visceral way. In DESIERTO, I wanted to create a gripping film that would engage the audience in that same kind of visceral, cathartic experience and also allow them to reflect on this very complicated subject which illuminates the often devastating experience migrants face in the search for a better life. Bringing Gael (García Bernal) on board was a no-brainer, not just for his skillful acting but also for the soul I trusted he would bring to the story. I knew that Gael also felt very passionately about issues surrounding immigration and would bring to life the struggle, hope and determination that are the fabric of the migrant story.

After a lengthy and successful festival run the first trailer has just arrived in advance of the film's March 4th US release from STX Entertainment. And, yeah, it's easy to see that Cuaron the younger can stand up easily on his own terms. Check it out below.

From Jonás Cuarón and Alfonso Cuarón, the acclaimed filmmakers of Gravity, comes a unique, modern vision of terror.  Desierto is a visceral, heart-pounding suspense-thriller packed with tension and suspense from start to finish, starring Gael García Bernal (The Motorcycle Diaries and Y Tu Mamá También) and Jeffrey Dean Morgan (Watchmen). What begins as a hopeful journey to seek a better life becomes a harrowing and primal fight for survival when a deranged, rifle-toting vigilante chases a group of unarmed men and women through the treacherous U.S.-Mexican border.  In the harsh, unforgiving desert terrain, the odds are stacked firmly against them as they continuously discover there's nowhere to hide from the unrelenting, merciless killer.

Do you feel this content is inappropriate or infringes upon your rights? Click here to report it, or see our DMCA policy.
alfonso cuarondesiertogael garcia bernalgravityjonas cuaronthrillertrailer