Review: CHRISTINE, An Essential Report on the Art of Self-Destruction 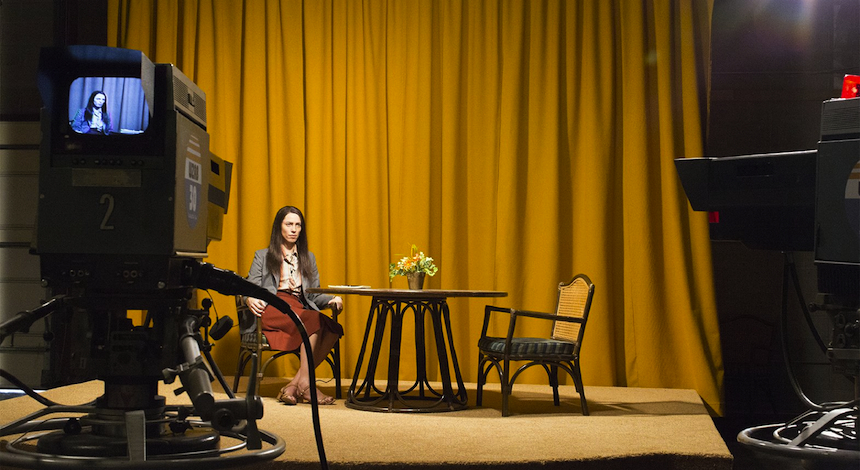 No. That's not right. Run the film again. What do we see: A woman in her late twenties, dark hair, big eyes, tall; walking down the halls of a TV station. Take the splicer to the footage. Chop it in half. Trim the front. Cut and paste. Begin again. A woman, the same woman, in her robe, at home, at her desk, taking notes as she listens to a police scanner. Try again. Look again. It's the same woman, wearing makeup, a soft summer dress. She's on a date, holding out hope that it's all true. That he loves her, too. Keep trying. Keep going. Make it again. Keep cutting. Reshaping.

Now it's Breaking Down/Performing/Perfecting. Breaking. Down.

A finely measured paranoia and depression weighs heavily at the heart of Antonio Campos' third feature, Christine, which is loosely based on the real events surrounding the 1974 on-air suicide of Christine Chubbock, a field reporter and host of the Suncoast Digest at WZRB, a local news station in Sarasota, Florida.

Played with such exacting precision by Rebecca Hall, in what is a career best for the thespian, Christine operates brilliantly on a multitude of levels, making for captivating slow burn cinema. One can consider it an intriguing deconstruction on the nature of performance itself; on the need to perform, to compartmentalize and control all facets of self with a force that belies the moment. This leads into a rich and nuanced look at depression, self-worth, and self-destruction: themes Campos has also explored in his previous two features, the excellent Afterschool and Simon Killer. What most surprises here is that Christine is also a Sydney Lumet level chronicle on the slow death of journalism and the rise of sensationalism and the culture of volume.

It is the summer of 1974. Nixon is about to be impeached. The country is weary, depleted. At the station, ratings are down. The audiences just don't tune in when they live in a town "without blood and guts" as news director Mike (Tracy Letts) states. TV News journalism, as the Walter Kronkites of the world know it, is fading into legend. If we tune in, and in, and in, we tune out. Something has to grab our attention.   Again and again. And. Again.

Christine, a year out from Boston, still the outcast with always something to prove, is determined to find the perfect story for this new angle on news. She buys a police scanner to field any reports for local crime she might be able to get a jump on. The officers mostly just chat about their sex lives. Sarasota is perhaps just too plain, too boring for any "real news". 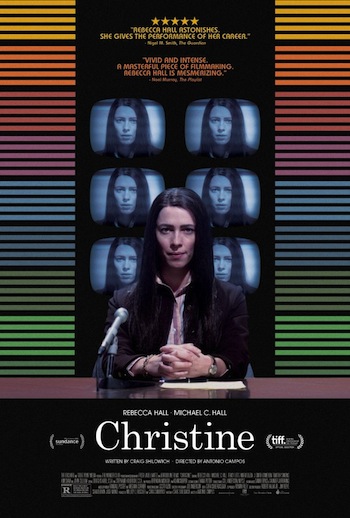 Meanwhile, pains in her abdomen persist through the workday and well into the night. She tells her mother (J. Smith-Cameron) it's just stress. The doctor reveals that there is a cyst on her right ovary. It will have to be removed. If she wants to have children it will have to be soon. She is a virgin. She is in love with George (Michael C. Hall), the anchor at the station.

When station owner Bob Anderson (John Cullum) decides to scout WZRB for talent for a station he's bought in Baltimore, Christine is determined to use this to her advantage. She will go to Baltimore and co-anchor with George. From her pitch, to her poise. She is in control.
She. Is. In. Control. But that's not enough.

Hall's portrayal of Christine is fearlessly weird, appropriately self-conscious and deconstructionist in tone. Surround by a supporting cast that exudes an easy naturalism, Hall stands accordingly askew as a woman who's very life is about how to break down and perfect performance at every turn. How do you be your best self? The most successful self? Correct your walk, your posture. Adjust again. Tell jokes. Be aggressive, but also be friendly. How do you hide from this deep sadness and hatred of self? Be more. Be on TV. Be better.

The dark mirroring of all this takes root in the scenes of Christine volunteering at the Children's Hospital where she puts on puppet shows about "being bold and brave". In the goofily pitched voices of her puppet characters Seesaw and Mrs. Tangerine, the softest, most broken parts of Christine come out. There she is: a woman awkwardly crouched behind a cardboard TV; in the very shadow of her drive, of her doubt. It is there that we begin to witness with an encroaching horror, her slow, determined death.

Building off a superb original screenplay by Craig Shilowich, Campos and his core team of filmmakers construct what is perhaps his most accessible film without ever negating the more avant-garde aspects which have made me such a fan since Afterschool premiered at Cannes in 2008. Joe Anderson, collaborating with Campos again after Simon Killer, is proving to be one of the best young American cinematographers working today. His approach takes root in a bizarre mix of both European expressionism and minimalism. Sickly greens and yellows interweave with soft shadows, firmly planting us within the withering mind of Christine. While less abstract and surreal, his work does remind me of Slawomir Idziak, the great Polish DP best known for his collaborations with Krzysztof Kieslowski.

Complementing the somber look of the film is the careful psychological unraveling editor Sofia Subercaseaux builds across each cut of Christine's 115 minutes. There is perhaps no better recent example of a writer, director, actor, cinematographer and editor working in beguiling unison than the scene where George, determined to be a good friend who wants to help the clearly struggling Christine, takes her to a transactional analysis group session. It is one of those great moments of cinema where words can barely get at the heart of the artistry and craft at hand... so why even try?

And that's just it: Christine is one of those films you live with for months. I originally saw the film at its world premiere at Sundance. Immediatly after the credits rolled, there was a strong desire to see it for a second time, a third time... as soon as possible! There was so much to unwrap and observe, to hold and take to heart. Truth be told, I was very reluctant to write a review mere hours after my first viewing. For while I generally revel in the ecstasy that is breakneck film festival writing, Christine had me reconsidering my approach. In an age where information flies at us in mileseconds, in this ever rising culture of volume and over saturation, perhaps it would have done me some good... done us all some good... to be kind to ourselves and slow down, consider, get quiet. To live with what we've seen for a time.

Now, months later, upon the film's theatrical release, I still wonder... perhaps I will write this review yet again. Chop it in half. Trim the middle. Cut and paste.

This review was originally published in slightly different form during the 2016 Sundance Film Festival. Christine begins its U.S. theatrical rollout on Friday, October 14th, in New York and Los Angeles.