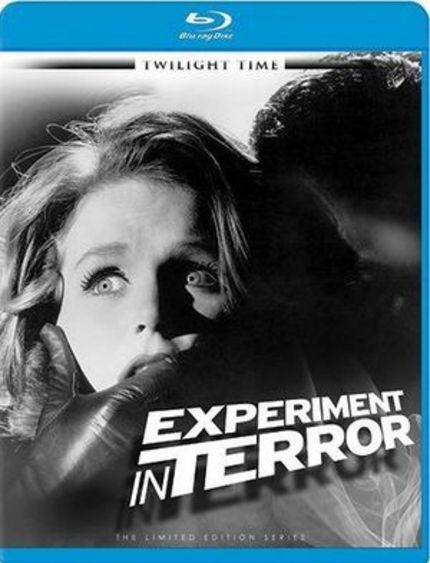 Back again for a little home video round up, this time we're looking at the recent genre output of super-niche label, Twilight Time. Over the last couple of years this team has released a good number of films prized by fanatics and collectors alike in their customary limited editions of 3,000. The last few months have seen a trio of fantastic genre films come to Blu-ray for the first time, and I wanted to make you aware of what you're missing out on if you don't place your order quickly enough.

Experiment in Terror
When I think of Blake Edwards, uncomfortably tense thrillers are not the first thing that come to mind, but before he was crowned a master of big screen comedy he was still finding his niche and made this fantastic little nail-biter. Experiment in Terror is a film decades ahead of its time, Twilight Time describes it like this:

Experiment in Terror (1962) is director/producer Blake Edwards's chilling excursion into atmospheric neo-noir, focusing on a San Francisco working girl (Lee Remick) stalked by a wheezing psychopath (Ross Martin) intent on forcing her to rob the bank where she works...or else. Fearing for the safety of her younger sister (Stefanie Powers) even more than for her own, our heroine pluckily makes secret contact with an FBI agent (Glenn Ford), hoping to foil the psycho before he can carry out his sinister threats.

Edwards' film feels very firmly set in its 1962 time frame, but the nastiness of the narrative is way beyond its years. This kind of unsettling cinema has become de rigeur in recent years, and has only managed to add graphic violence to the severity of the mental anguish inflicted. I was absolutely blown away by the remarkably swift pacing and genuine tension created in this taut little tale of a psychopath without any real motive and the chase between he and FBI guy, Glenn Ford. This is one for the ages, I'm surprised I don't hear more about it. They don't get much more thrilling that Experiment in Terror, I can only imagine what 1962 audiences thought of this one.

Twilight Time's Blu-ray is quite good. It captures Philip Lathrop's stellar black and white cinematography beautifully with no signs of digital manipulation and wonderfully crisp images. Edwards and Lathrop make excellent use of light and shadow in this film, and the disc is quite comfortable with that. The audio, including the isolated score track, is also superb. The only extra is a typically superlative booklet essay from Julie Kirgo, whose criticism and context building skills are one of the main reason I continue to tune into Twilight Time. Another winning disc from this company. 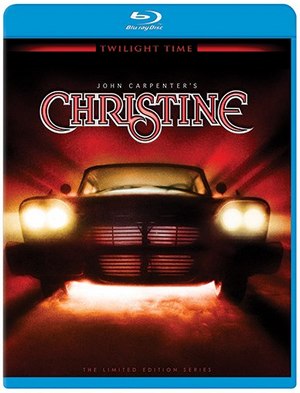 Christine (sold out)
Let me just say at the outset that if you haven't procured yourself a copy of Christine on Blu-ray, they are already sold out from Screen Archives and your only option at this point is through third party sellers, so don't expect it to come cheap. That caveat out of the way, you'll wish you'd placed your order immediately after you catch a glimpse of the gorgeous job Twilight Time have done with this film.  John Carpenter's lone stab at a Stephen King adaptation isn't the highest profile in either artists' resume, but it is a great little movie that is very much of its time. Here's the synopsis from Twilight Time:

Geeky student Arnie Cunningham falls for Christine, a rusty 1958 Plymouth Fury, and becomes obsessed with restoring the classic automobile to her former glory. But as the car changes, so does Arnie, and his newfound confidence turns to arrogance behind the wheel of his exotic beauty. Arnie's girlfriend Leigh and best friend Dennis reach out to him, only to be met by a Fury like no other.

I've always had a soft spot for this story. I have only read King's novel once, but I've revisited Carpenter's vision half a dozen times at least, and it never gets old. The acting in the film is mediocre at best, but that can honestly be said about many of Carpenter's films, however, the attitude is there, and it's all in the grubby little hands of Keith Gordon. Gordon's Arnie undergoes a remarkable transformation at the hands of his new Plymouth Fury, Christine. He goes from hopeless nerd to dating the hottest girl in school without skipping a beat, and all under the influence of the world's most jealous automobile. Also putting in great performances in tiny roles are Roberts Blossom as the man who sells Arnie the car and Harry Dean Stanton as a cop on the trail a several murders that all seem to lead back to little old Arnie. I love this goddamned movie so much and I can't wait to watch it again!

Again, at the risk of sounding like a broken record, Twilight Time's Blu-ray presentation of Christine is flawless. There is excellent color fidelity and an attention to fine detail that DVD just can't touch. The audio, again including isolated score, is fantastic as well, with the DTS-HD MA 5.1 surround track making sparing, but effective use of rear surrounds at key moments in the film. In addition to Julie Kirgo's great essay, this disc also ports over many of the previous extras from other versions of the film, including some behind the scenes footage and interviews and a commentary track that is well worth listening to. If you don't have this already, I pity you. 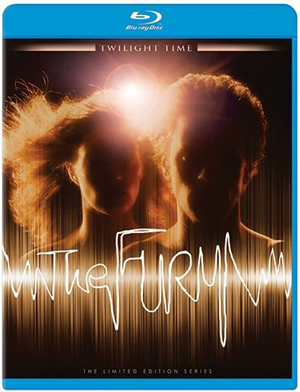 The Fury
Not many filmmakers can boast of making two consecutive classics centering around telekinetic teens, but Brian DePalma is no ordinary filmmaker. The Fury was DePalma's follow up to his amazing adaptation of Stephen King's Carrie. While clearly the lesser of the two films, The Fury has many charms to call its own as well as a stellar cast firing on all hyperactive cylinders. Twilight Time's Blu-ray presentation is easily the best to date, here's what they have to say about the film:

On its own merits, The Fury is a bit of a mess. I'm not entirely convinced of the world in which The Fury exists and DePalma does little to persuade me that I should be convinced. This is a case of letting go and allowing the film's internal logic to carry me along. It was a struggle at times, but I was convinced enough by the magnificent scenery chewing of Kirk Douglas and John Cassavetes to go with the flow. Douglas and Cassavetes, as mortal enemies, are a match made in Hell. Even as an older man, Kirk Douglas is a physical presence to be respected and feared, while Cassavetes plays intellectual menace with skill equal to his turn at selfish evil in Rosemary's Baby. The Fury is far from DePalma's best film, but that's a lofty goal to begin with, it's a solid sci-fi thriller in need of rediscovery.

Twilight Time's Blu-ray presentation of The Fury is quite solid, though significantly less flashy than their Christine release. The image here shows significantly more grain, though not unnaturally so, and the colors are a bit more subdued, but I think that is more to do with the director's intentions than any fault of the transfer. The 4 channel audio is quite good, though it is missing the surround channels of Christine, but this is by design. Unfortunately, there are no extras on the disc, but we get another wonderful essay from Ms. Kirgo that is well worth your time.

I'm still catching up with Twilight Time, who keep the hits coming fast and furious, but you can expect a look at their twin releases of Our Man Flint and In Like Flint in the next week or so.

More about The Fury