Ard Vijn
Editor, Europe; Rotterdam, The Netherlands (@ardvark23)
Tweet Post Submit
I saw Sergio Corbucci's 1970 western Compañeros during the video-boom of the early eighties, when suddenly an immense wealth of titles became available for home viewing, and renting a stack of videotapes was a part of each weekend's routine.

Not being into westerns, I initially skipped out, but the group of friends and family which had seen Compañeros wanted to see it again the next day, because it was such a fun film and "the music was so good". Huh? So I decided to join the second viewing, and ended up loving the film. Franco Nero and Tomas Milian made an excellent couple of anti-heroes, and indeed the soundtrack rocked.

Fast forward to more than thirty years later, with me vividly remembering the film (and its soundtrack) but never having seen it again. Suddenly I spot a special edition being announced in Germany by local distributor Digi-Dreams Studios, and my attention is caught.

Fast forward another month or so, and the object arrives on my doorstep. And indeed it looks mighty pretty. The film is in there on Blu-ray and DVD, in two versions: the German 1970 release which had 15 minutes of seriousness removed and a comedy soundtrack added (to make it look more like a Bud Spencer and Terence Hill kind of western), and the uncensored un-comedied 1977 release (which basically is the 1970 original Italian and American version). And it has Ennio Morricone's soundtrack on CD!

Technically this release isn't English-friendly, as you get German and Italian dubs, and German subs only. But lo-and-behold: in the extras they've put the 1970 US version, with an English dub, as well!

Also, there is a T-shirt and it's prettily packaged in a wooden box. Therefore, here is a gallery of shots. Click on the edge of the pictures to scroll through them, or at the centre of each to see a bigger version. 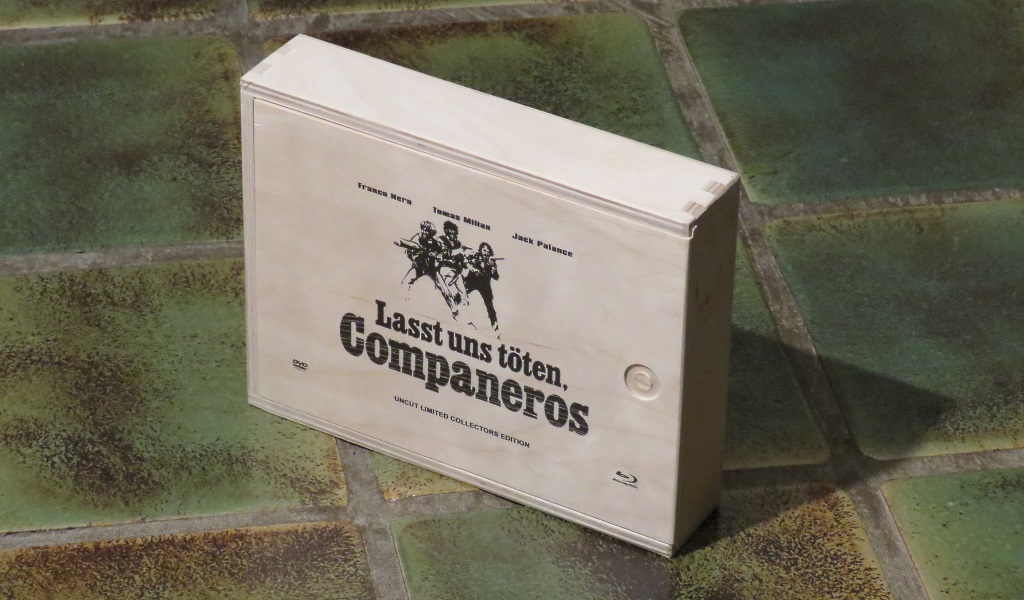 And here it is: a wooden box with the title of the comedy-version on it.

While the four-disc Platinum release itself is limited to 1,000 pieces, there are only 500 of these wooden box edition made. 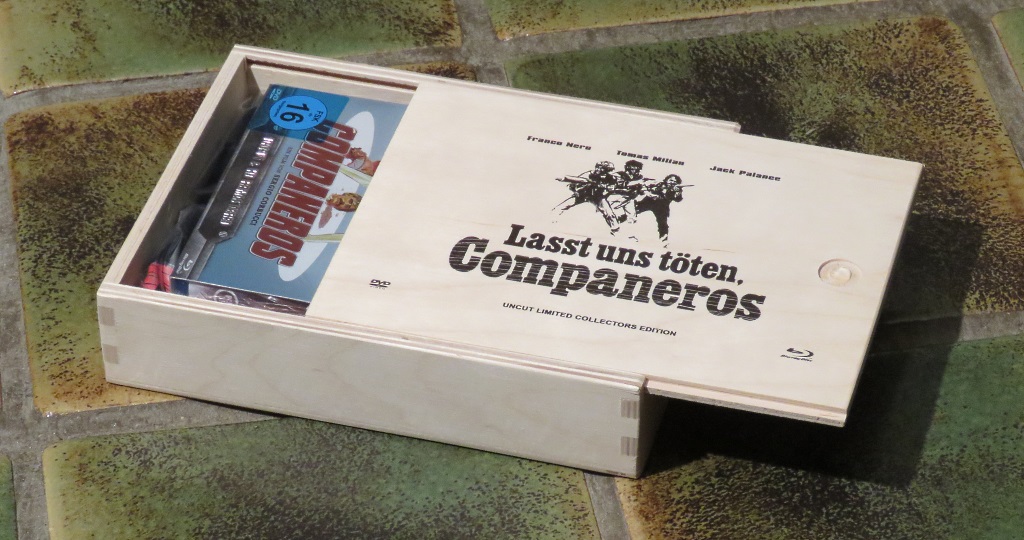 The box opens with a sliding lid, revealing there's not much air inside. 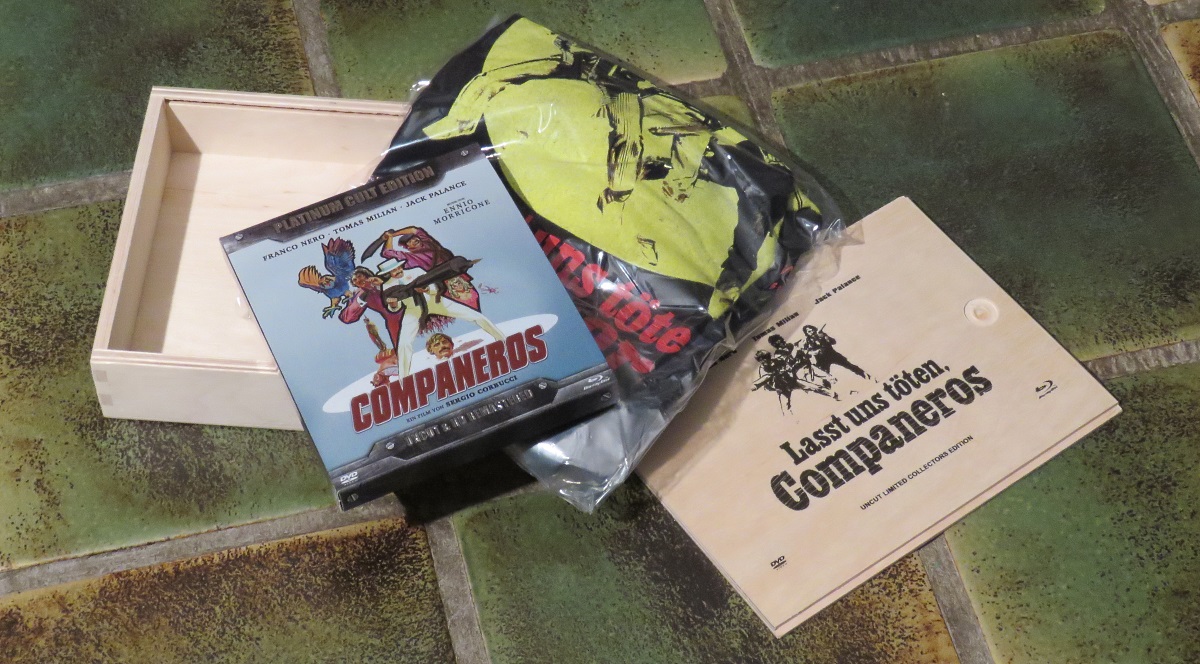 The contents are a slipcase for a 4-disc amaray, and a bag with the T-shirt. 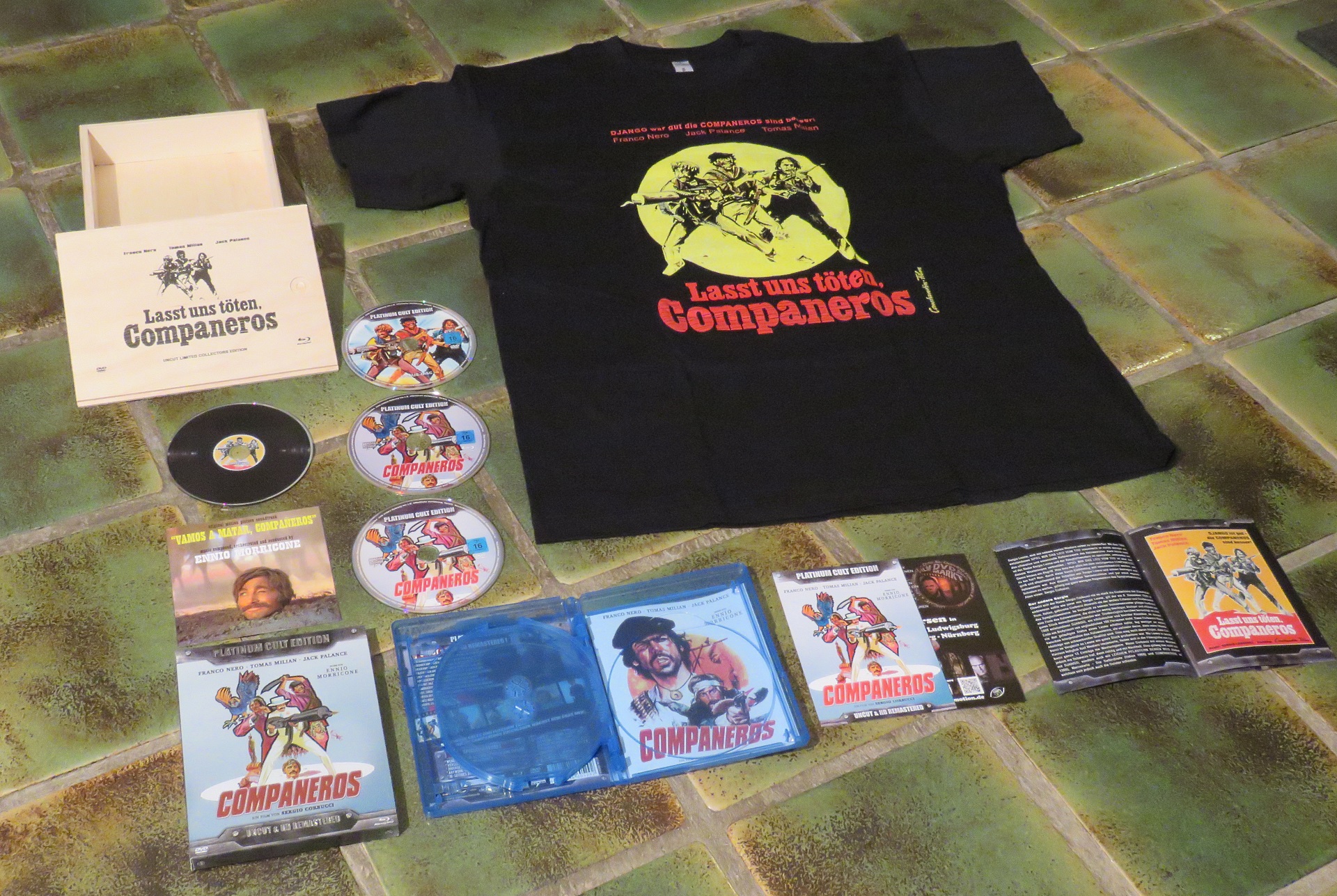 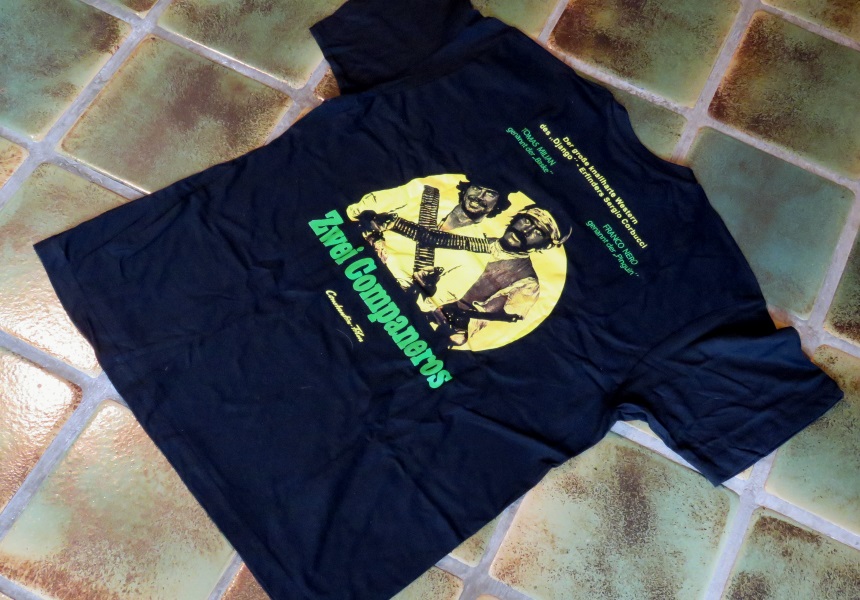 The T-shirt is reversible, with the fron showing the poster for the 1970 German comedy version of the film, while the back shows the poster of the 1977 "serious" version. 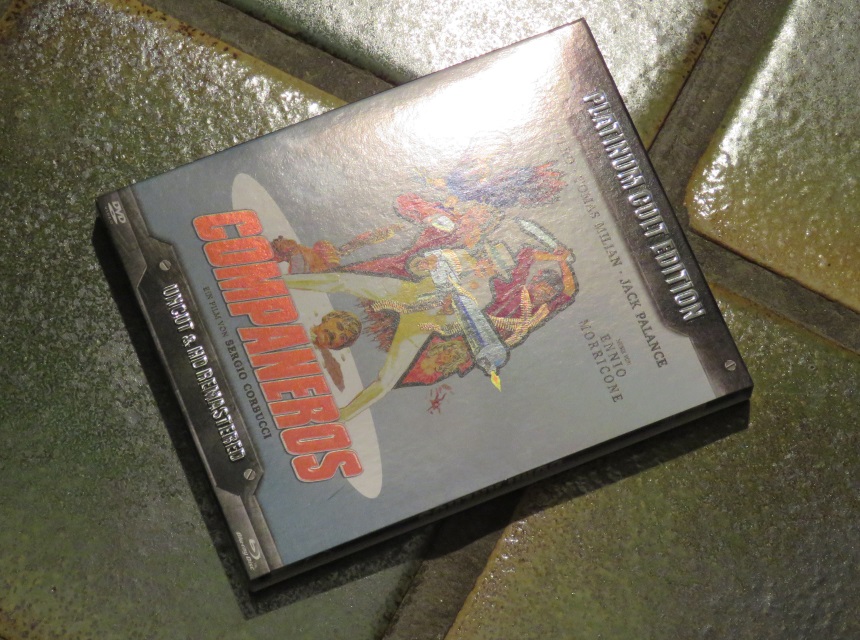 The slipcase has a metallic print, and the weapons shimmer differently from the background, which is a pretty effect (albeit hard to catch on photograph). 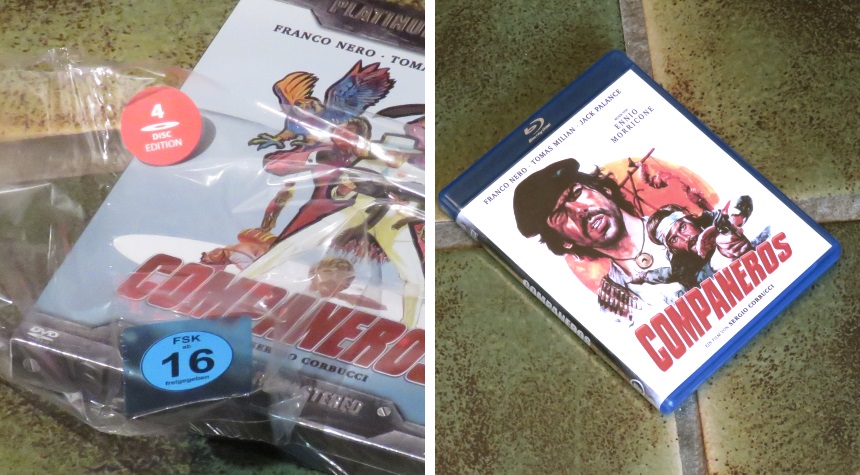 The Germans are known for excessively large age notifications, and the industry has responded with circumvention measures: the slipcase loses its labels with its sealing plastic, while the amaray within has a reversible cover without them. 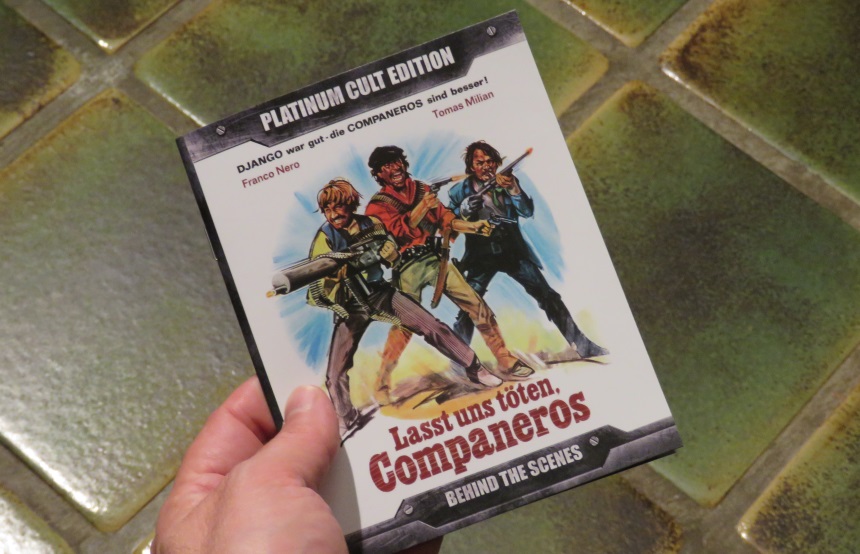 The amaray also contains a tiny booklet, which is small but fun. 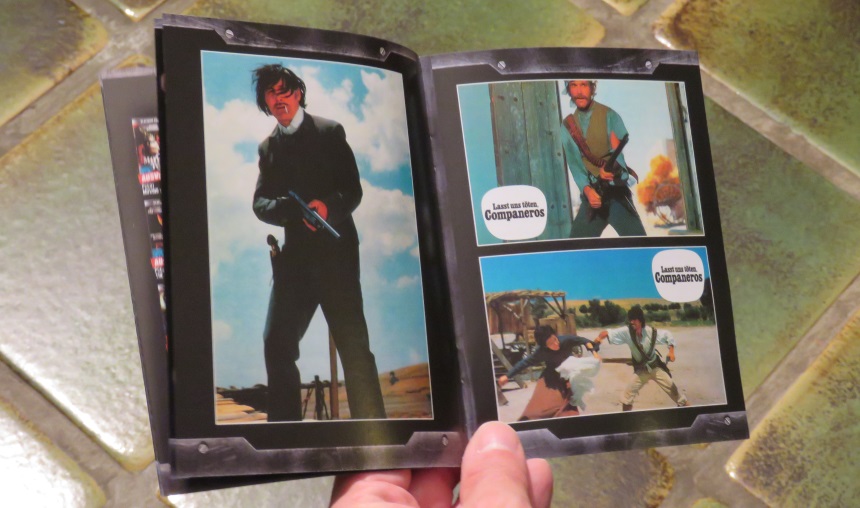 It's only 16 pages, four of which are adverts for other films, but the remainder has a few nice bits in there, like these pictures of the 1970 lobby cards. 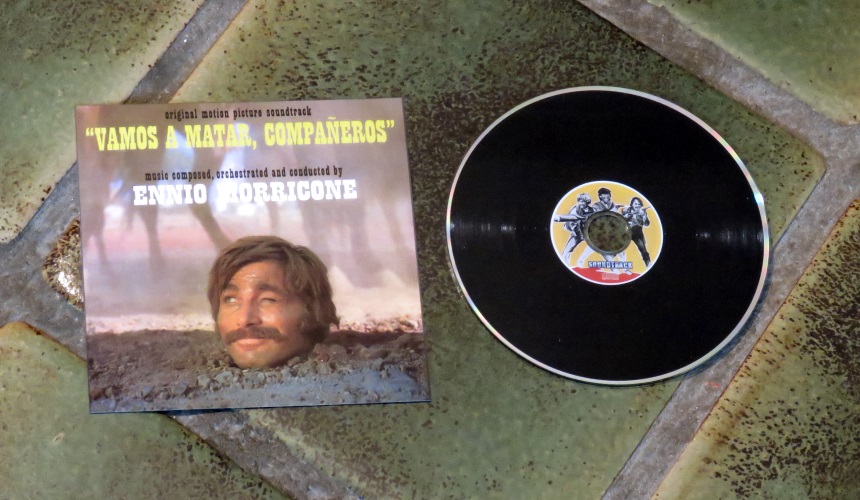 And ending this gallery on a high note is this edition's coup de grâce: Ennio Morricone's bizarre-yet-brilliant soundtrack, on CD!

Do you feel this content is inappropriate or infringes upon your rights? Click here to report it, or see our DMCA policy.
Blu-rayFranco NeroJack PalanceSergio CorbucciTomas MilianWestern