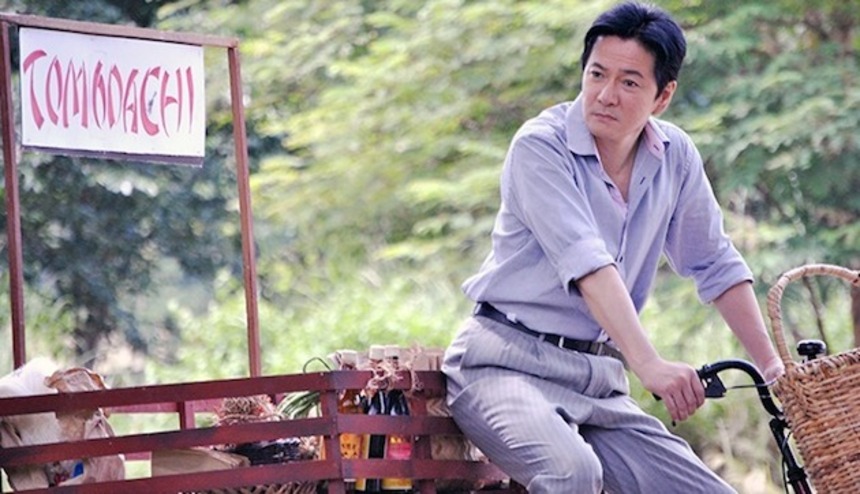 Having its official Japanese premiere in the Special Invitation section of this year's Kyoto International Film and Art Festival last week was Joel Ramagan’s Tomodachi (which literally translates as "friend"), an affecting and compelling cross-cultural love story set against the backdrop of World War II. The film, a long-awaited Japanese/Philippine coproduction, tells the true story of a Japanese man named Toshiro (played by talented actor/producer/director Jackie Wu), who spent a significant amount of his life in Cavite, a port city in the north of the Philippines, working extremely hard to make a living and to establish a strong bond with the local community.

An open-minded citizen of the world (he also spent some time in Hawaii) and a passionate Tagalog learner, he’s eventually found success both in business and in private life – his mobile grocery store was at a peak of popularity, while his relationship with a pretty girl named Rosalinda (played by the fast-rising Filipina star Bela Padilla) was at its most intense and romantic stage.

However, the sudden outbreak of the war and the Japanese occupation of the Philippines between 1942 and 1945 not only turned most of the residents against Toshiro, but also forced the man to close shop and join the Imperial Army as a soldier. Struggling with an abrupt and unexpected transition, he came back to the city to see Rosalinda and rekindle their love, but a tragic turn of events changed their lives forever.

A modest but definitely worthwhile exercise in low-budget filmmaking, Tomodachi overcomes its production limitations to tell a heartbreaking and very personal story about a period in history of the Philippines that undoubtedly deserves more international attention. While the film isn’t in any way heavy and there’s only one short gunfight scene, the themes of war and politics permeate the storyline, though certainly not in an obtrusive manner. Nevertheless, the heart of the film lies in its ability to depict an intercultural relationship, or any other for that matter, in a very universal and timeless manner. Anyone who’s ever been in one will probably be able to relate.

Jackie Wu gives a modulated and engaging turn as a man torn between inner feelings and a sense of duty, making his character seem strangely likeable even when he’s wearing an army uniform and shouting loudly at his subordinates, but it’s Bela Padilla’s heartfelt and sensitive performance that helps the movie resonate on a more sophisticated and emotional level.

Time shifts between the present and the past are smoothly emphasized by a stark contrast in colors and the overall change of mood. The low-key cinematography and actors work in unison to evoke a sense of sorrow and uncertainty appropriate for the times Tomodachi is set in. While in the music department the film leaves quite a lot to be desired, the recurring gentle sound of a wind chime sort of compensates for that shortcoming.

During a post-screening interview at KIFF, Wu mentioned that the main motivation behind making Tomodachi was to “depict pure love (between two people)”. Yet, when the final credits start to roll, it remains rather disputable whether it’s the beautiful romance or the infectious grief, which the main character clearly carries with him when he returns to Cavite for the first time in 50 years, that has a more emotional impact on the viewer.

While some people might find the introductory modern-day element particularly heartwarming and redemptive, it’s also possible to perceive it at as a metaphor for Toshiro’s inability to come to terms with his turbulent past. Even though his longtime friends, who for perfectly understandable reasons treated him as an enemy at the onset of war, try to make him feel at home once again and convince him of his innocence, the air around them seems constantly thick with awkward tension. The sensation might not be intentional, but it sort of ambiguates the nature of the protagonist’s actions. It’s quite obvious that the flashbacks form the main narrative here, but in the end it’s the scenes that take place in 1995 that seem more revealing and meaningful.

Do you feel this content is inappropriate or infringes upon your rights? Click here to report it, or see our DMCA policy.
Bela PadillaJackie WuJapanJoel RamaganKyoto International Film FestivalTomodachi京都国際映画祭