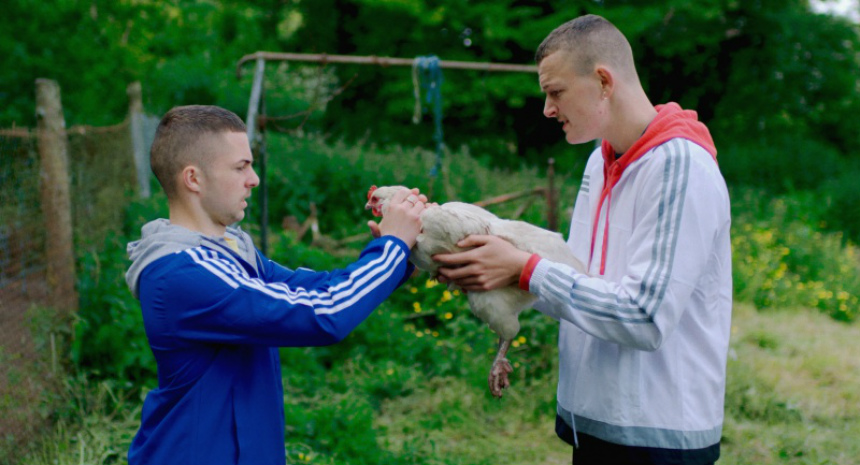 Rowdy, raucous, and rude, The Young Offenders is a blast of adolescence without angst, a juvenile movie that is surprisingly cheerful, even as its young heroes straddle the thin line between criminality and, well, not being a straight-up criminal.

Conor (Alex Murphy) and Jock (Chris Walley) are best friends in the largely comic tale, which is set in 2007. They live in Cork, a good-sized city along the coast of Ireland, where the 15-year-old schoolmates are kindred souls. Both are being raised by single parents, though neither is happy about it.

Conor's mother (Hilary Rose) is gainfully employed selling fish at the well-known English Market and provides as best she can for him, but Conor views her protectiveness as suffocating. Jock's father is an angry alcoholic who does nothing for his son except steal from him.

Jock is the taller of the two boys and also the natural leader. Conor happily follows after him, though he denies that he's simply copying his friend's appearance and behavior. The two are sympatico in their self-centered approach to life, open to most anything that might be fun for them, no matter what might happen to others, as they make plans to save up money and move to the big city (Dublin).

While Conor reluctantly works with his mother at the fish market, Jock busies himself in petty crime, (mostly) stealing bicycles and selling them to save up money. Jock's larcenous activity enrages a dogged police officer named Healy (Dominic MacHale), who makes it his personal mission to catch him.

One day, Jock hears about a ship that has foundered on the coast some distance away, leaving a huge quantity of cocaine, apparently up for grabs. Immediately, he hatches a plan that is almost elegant in its dumb simplicity: get the drugs; sell the drugs. Soon, the boys are off on an epic bicycle ride that is only the beginning of their journey to adulthood.

If that sounds grandiose or pretentious, rest assured, The Young Offenders is neither of those things. Instead, it's snappy and smart, the comedy emerging thanks to expert timing and unexpected turns. Peter Foott wrote and directed; it's his feature debut, but he gained experience making short films before moving into television, which benefits the movie as it flies by, overcoming potential stumbling blocks with its nimble pace.

At its heart, this is a dreaded 'coming of age movie for boys' that remains almost relentlessly male, with only the barest acknowledgement that Conor's mother is a woman. But that also reflects the reality of 15-year-old boys who are preoccupied with their own needs and wants.

Their viewpoint on the world is still limited, not only because they've apparently never left their hometown but because their emotional growth is also a work in progress. This journey may not be the turning point in their lives, but it's certainly a meaningful experience that will influence what sort of adults they will prove to be.

Dispensing with my own attempts at cultural analysis, prompted by personal history -- half my roots go back to Ireland -- The Young Offenders is a sheer pleasure to watch, filled with capable and charming performances and never taking itself too seriously. The lightly comic touch is present throughout, even for the occasional dips into more sentimental territory.

The movie captures the joys of being a 15-year-old boy, doing whatever feels right without much thought for the consequences. Yet it also hints, kindly, that the capacity for human kindness is within (nearly) everyone; all you have to do is tap into it.

The film will screen again at Fantastic Fest on Monday, September 26.

Do you feel this content is inappropriate or infringes upon your rights? Click here to report it, or see our DMCA policy.
Alex MurphyChris WalleyDominic MacHaleFantastic Fest 2016Hilary RoseIrelandPeter FoottCiaran BerminghamComedy