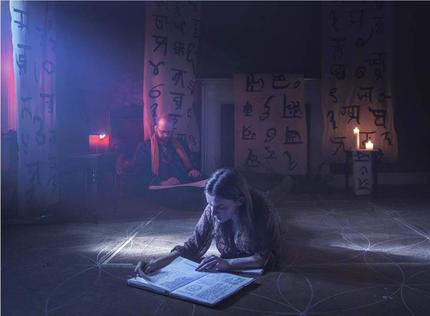 All deaths are hard to deal with, but I would argue there is nothing worse than losing your child (after all, a parent is not supposed to outlive their children). Certainly, when we lose a loved one of any kind, the lengths we might go to, to speak to them, even one last time, might seem extreme to others. Liam Gavin's impressive debut feature A Dark Song looks at these extremes with a sympathetic but realistic eye, and a great capacity for finding new ways of presenting traditional horror tropes.

Sophia (Catherine Walker) has never overcome the death of her young son. She hires a strange occultist, Joseph (Steve Oram), to perform a ritual that will allow her to speak to her dead son. They cut themselves off form the world in a remote house in Wales for a year, performing strange rites that may or may not work, and slowly buckle under the pressure.

Certainly, A Dark Song is not the first film to use the religious/cult rituals, whether is be about exorcism, raising the dead, speaking to the dead, or enacting vengeance. What sets this film apart is its exploration of the labour that such a ritual, if it is actually to be effective in summoning an angel (or demon). Rather than about the result of such a ritual, this is about the action of the ritual itself, the hard physical labour of it. You can’t just throw some flower petals or bones down inside a chalk circle, say a few words of Latin, and expect results.

Liam Gavin then makes his film appropriately dark; all indoor scenes look as if they were shot by candlelight. And not romantic dinner candlelight, but greasy fat yellow candles used against the curse of the night. Even the few outdoor scenes are bleak and grey. This is little room for humour, and Gavin keeps a tight pace and the dialogue reduced to its most economical and powerful.

These are two people who would never have anything to do with each other (deliberately or otherwise) in normal life. But each has something that the other needs: Sophia needs Joseph’s occult skills, and Joseph needs Sophia’s money. A sort of caring grows between them only because they are trapped together. Both Walker and Oram move their characters from interesting stereotypes to further depths and significance. Walker eschews the standard sorrowful mother in her portrayal of Sophia to one whose grief has turned to almost blind hatred of any happiness. Oram’s Joseph might be a bit of a wanker, but he is a working man (just working in the occult), and at least he’s honest in his expectations and what needs to be done.

This is really all about the pain of grief, and how the emotional toll of such grief becomes physical, and how only that physicality might lead to some relief. Joseph makes it clear to Sophia that there is no backing out, that this year will be a year of tremendous sacrifice and even at the end she might not get what she wants.

Rather than give the usual frights, Gavin instead goes for the lonely heart of the occult: the attempt to contact the beyond, for the most heart-wrenching of reasons. A Dark Song takes a hard and serious look at the pain of loss and grief, and how that pain transforms into burden and enlightenment.

Do you feel this content is inappropriate or infringes upon your rights? Click here to report it, or see our DMCA policy.
A Dark SongCatherine WalkerLiam GavinSteve Oram