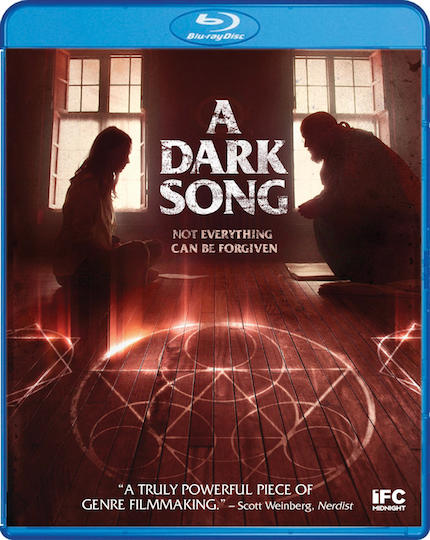 Scream Factory is an awesome imprint and they show no signs of slowing down with their superb releases. To that end, the horror distribution arm of Shout! Factory has recently released the festival hit A Dark Song, which toured the circuit last year to great acclaim. (You can read Shelagh's Fantastic Fest review here.)

In the film, Sophia (Catherine Walker) seeks revenge over the shocking and untimely death of her young son, and she'll go to Hell and back to do it. She's hired Joseph (Steve Oram), to perform black magic rituals in a remote Welsh manor so she can speak to her dead son. They must stay within the circle (within the house) for nearly a year --- and do several other horrific things to make these rituals work.

Writer/director Liam Gavin excels in his debut feature film --- A Dark Song is reminiscent of Jacob's Ladder, and is that rare beast that offers both deeply disturbing horrors and an incredible sense of hope and redemption. If that sounds like something that appeals to you, you'll want to add this film to your home "video" collection. Superb performances by Walker and Oram sell the film, particularly Walker, who carries the entire film.

Additionally, A Dark Song is the kind of film that you can point to and say, "THIS is a prime example of a fantastic film done right in one location." Of course, I'm referring to the manor in which most of the action takes place --- a large, old dark house miles and miles away from civilization in the kind of area where the locals warn you to stay off the moors. (Yes, I know that's England, and not Wales, but it has the same spooky feel.)

So --- the film itself is a fantastic treatise on the nature of human and occult horrors, as well as a quiet reflection on forgiveness and moving on after grief and tragedy have destroyed one's life.

Here are the bonus features:

The interviews were fine, but mainly, the same daft questions were asked of the cast and crew on set, like, "what's your favorite horror movie?" and "what was it like working with this cast and crew?" Here's an example of where a journalist or film expert should have been brought in to further the material. The rest of the extras are okay, but will probably not add much to your experience. Here, it's the content that's going to whet your appetite.

To that end, the film is at times much too quiet, and I had several instances wherein I missed what was being sad. Similarly, A Dark Song is --- appropriately --- much too dark at times. There are things in the periphery that you might not catch. Of course, this can add to part of the charm to this film. Since I wasn't able to catch the movie in a theatre, I have no basis of which to compare this release --- but it does seem like there are instances where the picture is TOO dark.

Interested in learning more about this strange and redemptive film? Head over to Scream Factory's release page here and check out the trailer for the film below.