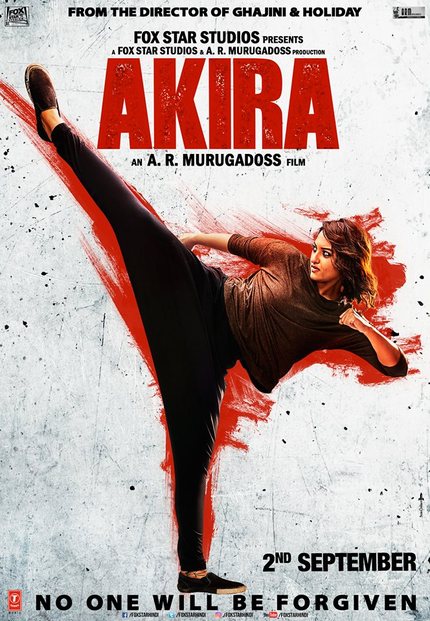 A.R. Murugadoss, the man who brought the world Ghajini - the musical adaptation of Memento - and 7 Aam Arivu, a film about a circus performer who is the last living scion of kung fu Bodhidharma, is back in the director's chair with his new film Akira (or Naam Hai Akira in North America).

This is not a remake of Otomo Kastuhiro's 1988 cyberpunk anime classic. It is instead a remake of a 2011 Tamil film called Mouna Guru with the lead role notably gender swapped from a male protagonist in the Tamil version to Sonakshi Sinha's female Akira in the Hindi film.

Here's a bit of the synopsis to give you a taste:

A gripping action thriller about a college girl Akira (Sonakshi Sinha) who has grown up with the ideals of being self reliant. Her life spirals out of control when she becomes unwittingly involved in a crime involving four corrupt police officers and she takes them on single-handedly in a bid to prove her innocence.

Murugadoss is a big name director in India. Unfortuntely, he's also a terribly uneven one. His biggest box office success to date is Ghajini starring Aamir Khan, which was a remake of his Tamil film that shared the name. That film was a riff on Christopher Nolan's Memento that was largely memorable for Khan's six-pack abs and some very stylish direction. More recently he made the gorgeously shot but sadly vapid Thuppakki in Tamil and remade the film again in Hindi as Holiday.

While I'm certainly interested to see anything Murugadoss puts on screen, I must say that probably the most interesting part of Akira is that opposite Sinha as the villain is none other than Indian indie stalwart director Anurag Kashyap. This isn't Kashyap's first time in front of the camera, but it is most definitely his first time as a lead, and if this trailer is to be believed, I'm pretty sure he's going to get kicked in the face at some point in the movie.