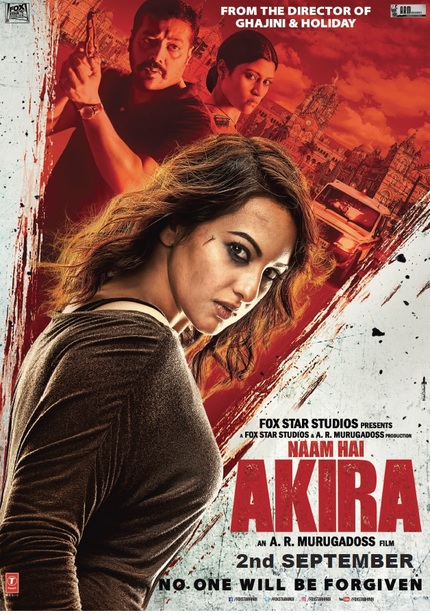 AR Murugadoss is a filmmaker who lives in a world of big ideas. Over the last decade he's made a string of big budget, often high concept features that typically flounder with critics but tend to turn a profit with mainstream audiences.

Beginning with his Bollywood debut Ghajini, a remake of his own Tamil language film, Murugadoss has set himself apart as a director unafraid to take narrative risks and throw a bit of left field madness into his films. With Ghajini, it worked like gangbusters as his thinly veiled riff on Christopher Nolan's Memento, complete with technicolor dance numbers, burned up the box office and became the biggest grossing Indian film of all time back in 2008.

In the years since Ghajini, Murugadoss has attempted to recreate that magic with varying levels of success. First up was 7 Aam Arivu, a film in which a circus performer discovers that he's actually the last living scion of the inventor of martial arts, Bodhidharma, who then has to fight off an evil Chinese plot to take over the world via mind control. Sounds great to me, but the execution of the film was remarkably limp as Murugadoss watered down this incredible premise to cater to the baser tastes of mainstream audiences. Too much romance, too much dancing, too much melodrama, and too many subplots bogged the film down and bloated the run time beyond a sustainable limit. The action was great, and the staging was pretty decent, but there was too much fluff.

He followed that up with Thuppakki, a national security thriller in which a vacationing commando is thrust into action in urban Mumbai when a terrorist sleeper cell rears its ugly head. That film suffered from many of the same ills as 7 Aam Arivu, but without the benefit of a crazy, over-the-top through line to keep the audience sated. What it lacked in urgency and novelty, Thuppakki made up for in beauty as ace cinematographer Santosh Sivan delivered one of the most beautiful films of the year. That film did land with Tamil audiences, and was successful enough that Murugadoss was, once again, hired to remake his own film in Hindi, this time as Holiday with Akshay Kumar, and this time to considerable financial success.

A few years later Murugadoss is back with Naam Hai Akira (or just Akira outside of North America), a female fronted martial arts action film led by top Bollywood clothesrack Sonakshi Sinha. This time around Murugadoss has limited his scale and set the expectations low as the story basically follows a single character as she gets caught up in a web of conspiracy and corruption when a crooked cop, played by indie director Anurag Kashyap, stumbles onto a small fortune following a car accident and is determined to keep it secret by any means necessary.

There is potential here, this is largely unexplored territory in a mainstream Bollywood A-list movie. Female fighters have been a part of India's exploitation circuit for decades, but it's only recently that women have been shown to be box office draws. Over the last three or four years a number of gynocentric dramas and romantic comedies have been decent critical and commericial successes, but very few action films have made money. Murugadoss had the opportunity to break some new ground, but Naam Hai Akira fails at nearly every single thing it attempts, and spectacularly.

The film opens with a growing-up montage explaining Akira's remarkable martial arts talents through an incredibly poorly staged series of fights featuring a young actress who really probably deserved better. Young Akira has moxie, and when she witnesses a young woman getting acid thrown in her face for spurning a harrasser's advances - a legitimate and age old problem all over India that deserves attention - she decides that she'll never be that victim and her father puts her into martial arts classes with the town's boys, notably in direct contrast with every other girl in town, all of whom are shown attending dance classes five feet away from the boys.

There is nothing wrong with the idea of this montage, in fact, as a way of setting up the character, it's pretty handy. However, it's the shoddy craftsmanship of the fight choreography, pathetic fight direction and camera movement, and an inexplicable scene featuring real life acid attack victims that sinks this thing, and this is all before the credits roll. Following a scenario in which a roly poly young Akira defends another damsel in distress from an attack, leading to the would be attacker becoming the acid victim himself, our young heroine is put into juvenile detention, which only seems to steel her nerves and hardner her resolve to never be a victim.

Fast forward to several years later when Akira is college age (Sinha is 30 in real life, but that's a far cry from the ridiculous suspension of disbelief we're often asked to endure for male Indian film stars), and she is forced to move to the big city of Mumbai from her family home in Jodhpur. Her brother enrolls her in Holy Cross School, a Catholic school that is half University and half grade school for the deaf and dumb, where she quickly finds herself on the bad side of the bad kids because she refuses to join a walkout to protest the cafeteria food on her first day in class.

Now, none of this makes sense for a single second, even within the internal logic of this almost majestically stupid film. None of these characters, with whom we spend a notable amount of time, serve as anything more than anecdotal evidence of Akira's single mindedness. The bad kids eventually pick a fight with her for no good reason and get their asses handed to them (over and over again, I might add, you'd think they would learn their lesson after the first three times), and the deaf kids serve no purpose other than to make Akira look pious when she coos at them and they coo back.

Meanwhile, outside of all of this unnecessary charcter development, Anurag Kashyap's ACP Rane plots to keep his found fortune a secret among his closest corrupt confidants. When Rane's trip to a local hooker backfires on him, evidence of his misdeeds finds its way out into the world and he spends the rest of the movie slashing across Mumbai to get it back. Akira gets caught in the middle when, in an incredibly stupid plot twist, she finds a bag full of stolen good outside of her room at the university hostel. Among the goods is a video camera with footage of Rane discussing the heist and ways to keep it quiet. Rane's goons find Akira, take her away to keep her quiet, and the plot gets uglier and uglier from there.

Our steely eyed heroine is reduced to a doped up mental patient in an attempt discredit her and keep her quiet, a move that completely sapped her of the kind of power she'd struggled to imbue the character with in the first half of the movie. In reality, it seems like the drugging was little more than an excuse to showcase a bit of drunken style kung fu from Sinha, though it's difficult to tell if she's any good at it because it, like everything else in the film, is shot incredibly clumsily.

None of the fighting, which is the only part of the film that was ever really marketed at all, is very good, though it does avoid the physics defying stuff that tends to make for viral video fodder these days. After thinking about it for a while, though, I'm not so sure that was a good idea. Realism doesn't seem to be too much of a concern here, and if anything it appears to have been most stridently adhered to in the most inappropriate moments. Sinha is easily able to take on a dozen fully grown men in a street fight, but when confronted with two men in nurses' scrubs, she crumples instantly.

This is going to sound a bit strange, but the film's lone bright spot comes in the form of the acting performance of Anurag Kashyap. His ACP Rane is a full-on mustache twirling bad guy, and Kashyap owns it with nearly every breath he takes on screen. Whether everyone else is phoning it in, or they are really just that bad, Kashyap steps up to the plate in his first lead role and really does a great job. His performance hits an unfortunate dip near his demise (spoiler alert), but that is clearly more a matter of poor directing and editing choices than lazy acting. Sinha, on the other hand, literally sleepwalks through most of the film, refusing to emote apart from a few random outbursts that seem more like tantrums than acting. Even less effusive is the normally reliable Konkona Sensharma as a good cop trying to untangle Rane's web, who never smiles, scowls, laughs, cries, scoffs, or moves her face at all throughout the film.

The story takes enough loopy left turns that by two-thirds of the way through the film, I was wondering if they bothered writing a script before the turned on the camera. Completely unfounded revelations are conveniently dropped into the story when everything stops making sense, and somehow make the film even stupider than it was before. This abuse of the Deus Ex Machina culminates in an eleventh hour plot twist for which there is no reasonable explanation and would have been infuriating in a decent movie, but was laughable in this one.

Naam Hai Akira is one of the most atrocious examples of gritty masala gone wrong in recent memory. Murugadoss can't decide if he wants his film to be over the top, standard Bollywood fare, or a gritty story about corruption in the halls of power. The result is a tonally confused mess that left me mostly stupefied, and frankly glad that I didn't spend my own money on a ticket this time. Poor acting, poor action, embarrassing writing, and lazy plotting sink this film almost before it gets started, but by the time the credits roll, you'll just be glad it's over.