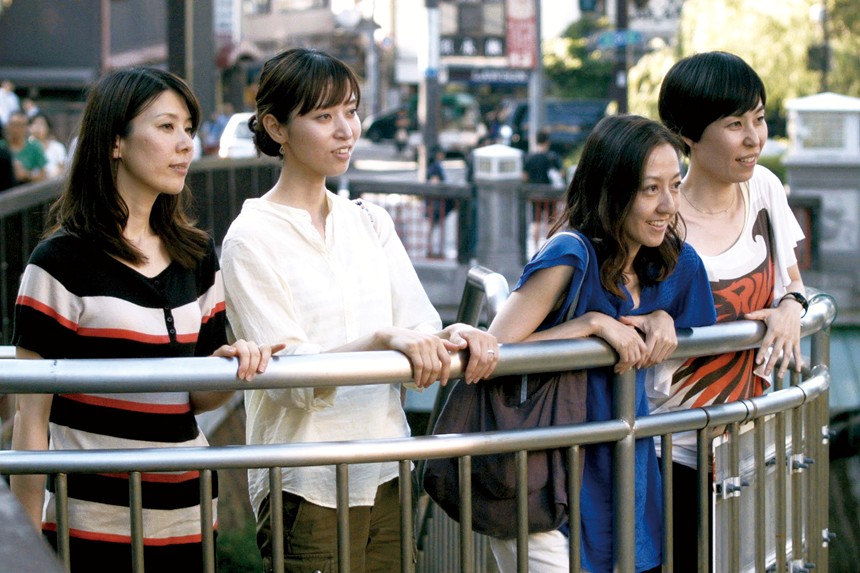 When I first settled down to view Ryusuke Hamaguchi’s Happy Hour earlier this year at its New Directors/New Films festival press screening, its great reputation preceded it, a reputation that included some uniquely anomalous features, unusual even in the context of the adventurous and idiosyncratic landscape of the world film festival circuit.

After Happy Hour premiered in competition at last year’s Locarno Film Festival in Switzerland, besides winning a prize for Hamaguchi’s screenplay, the best actress prize was shared by its four-woman central ensemble cast. That was unusual enough, but even more remarkable was the film’s length – 5 hours and 17 minutes, to be exact.

Such a prodigious running time can be a daunting proposition, even for the most dedicated, die-hard fest-goer, especially with a 10 a.m. start time, as was the case with the screening I attended. But I was primed, prepared, and expectant – the latter of which can be a dangerous thing, since there’s always the possibility that such great anticipation can lead to a let down. Fortunately, it didn’t take very long for me to realize that Happy Hour would more than fulfill its great promise, and I emerged from the screening having had what would turn out to be the most immensely absorbing and deeply satisfying cinematic experience I’ve had so far this year.

Clearly, the programmers at the Museum of Modern Art agree that Hamaguchi’s work is something truly special, because they have brought it back for a weeklong run, which will conclude on August 30. Needless to say, I urge anyone who can possibly spare 317 minutes (plus a 10 minute intermission) to spend it with this extraordinary masterwork.

It really is difficult to overstate Hamaguchi and his actors’ achievement in meeting the ambitious challenge they have set for themselves, even more so considering the fact that the cast is made up entirely of nonprofessional participants in acting workshops Hamaguchi conducted in the city of Kobe, where the film is set. Shot over the course of eight months, with the script developed in close collaboration with his cast, Happy Hour combines the observational techniques of documentary (which Hamaguchi has a background in) with artfully and meticulously constructed drama.

The film’s length turns out to be neither an authorial indulgence nor an endurance test, but instead a way to allow its themes, character development, and its patient and intensely empathetic evocations of both the crises and mundanity of human existence room to stretch, breathe, and fully resonate. Happy Hour takes this unique approach to depicting the highs and lows of the friendship between four women, who are all in their late thirties, and in fact all exactly the same age: Jun (Rira Kawamura), Akari (Sachie Tanaka), Sakurako (Hazuki Kikuchi) and Fumi (Maiko Mihara).

They are all married save for divorcee Akari. We are first introduced to them as they ride a cable car to a hilltop picnic lunch overlooking a city which is shrouded in a fog which, as one of them observes, is an apt metaphor for their futures. They plan to get together for a trip to a hot spring, which is easier said than done in terms of coordinating their work and home schedules to make this possible; Sakurako finds it especially difficult to negotiate the rather tightly controlled nature of her duties as a stay-at-home spouse.

Over the course of the next five hours, Happy Hour draws us ever deeper into the intricacies and complications of the relationships between these four women and the constellations of family members, spouses, coworkers, and others that surround them. Much of this suggests a high-end art film version of a Japanese TV drama, but what separates this from typical television – despite the potential sources of melodrama contained in the film’s dramatic materials – are its clearly discernible cinematic influences.

Its intimately observed sense of humanism – and its employment of visual techniques such as characters seeming to directly address the camera – evokes such Japanese masters as Ozu and Kore-eda, while its extreme length and its analytical approach to depicting the foibles of human behavior and interpersonal relationships recall Rivette and Rohmer.

Happy Hour, despite these apparent influences, is a very original-feeling work, not quite like anything that has come before it. The collaborative nature of its approach to performance creates a convincing sense of camaraderie among its four principal actors, where you can completely believe that these women have indeed been friends for decades. The density and depth of its narrative complications and story tangents, and its unfolding revelations of character, have a very novelistic quality. Two very lengthy episodes (about 30-40 minutes apiece) that bracket and anchor the film, and play out in what feels like real time – one a New Age-type consciousness-raising seminar the women participate in, the other a literary reading at an arts space Fumi runs – feel as much theatrical as cinematic.

Happy Hour is structured around a series of gatherings – a picnic, a dinner, a hot springs retreat, a seminar, a game of mahjong, a literary reading – that reveal and develop character, as well as occasion many insights into contemporary Japanese society, especially how women are expected to behave and function, and the social norms that often entrap them within prescribed roles. One of these gatherings is the site of a revelation from one of the women that causes fissures and tensions in the relationship among them, causing them to reassess their friendship. These reassessments eventually expand beyond the friendship to their other life relationships, where they are in their lives, and discovering the things they truly want for themselves.

I won’t go into much more detail than that, because one of the great pleasures of Happy Hour is in its sense of discovery, and in its careful unfolding of character and incident. You’ll find lots of other pieces on this film on the web, many of which go into great detail about the many things that happen in this very long film. But I think it’s best to avoid all that and go in as cold as possible, so that this amazing film can work its deeply absorbing, intimate spell on you as you watch. And at the end of 317 minutes in the company of these characters, they’ll become much more than just film characters; they’ll be akin to old friends you’ll long to revisit.

Happy Hour screens through August 30 at the Museum of Modern Art, with Hamaguchi in attendance. For more information, visit MoMA’s website.