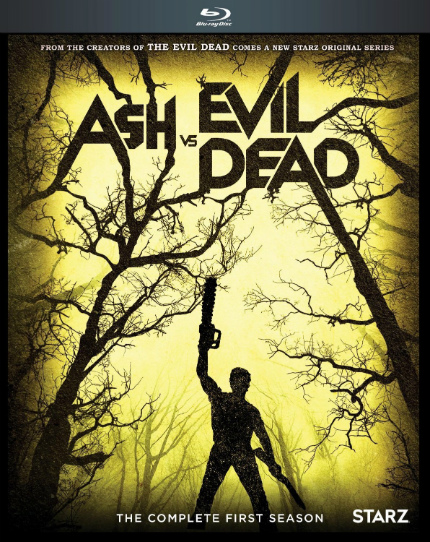 When it was first announced that Sam Raimi's Evil Dead series was rising from the dead as a TV series last year, I jumped for joy. The Evil Dead films, and especially Evil Dead 2 and Army of Darkness, were my entry into the world of horror when I was a teenager, and I have really strong nostalgic ties to the world of Ashley Williams. However, I will also freely admit that, like many fans, I was a bit nervous to give my heart over to this new iteration of the character and the world.

There hasn't been a new Evil Dead product in over 25 years, and in those years both Sam Raimi and Bruce Campbell have gone off in some crazy new directions, not all of which I've liked. After Evil Dead, Raimi tried to go legit with some prestige pictures like A Simple Plan and For the Love of the Game. Not exactly all-time greats, but solid films that completely left his horror roots behind. He followed those up with the first run of Spider-Man films, which were fantastic, at least the first two. I'd even opine that Spider-Man 2 is still one of the greatest comic book adaptations ever made. Those films gave us a little bit of the old Raimi, a director not afraid to take chances and utilize the power that directors have over their audiences to create a world, no matter how illogical, and place the viewer inside of it so that it all makes sense, but they still weren't horror.

It wasn't until 2009's Drag Me to Hell that Raimi revisited the genre and style that made him famous. That film is one of my favorite 21st century horror films, and it is largely because of the fact that it reminds me of the films that I love dearly from my youth. The crazy camera moves, the wicked sense of humor, the constant gross-out gags, all of it made me smile and cackle like an old crone and I loved it.

Campbell, on the other hand, never quite cracked the big-time movie star nut and made a pretty decent little living for himself in the TV world. From his ubiquitous presense in the world of Hercules and Xena, Bruce Campbell created a whole new fan base as the beloved Autolycus, a character in which he could stretch his considerable comedic talents. Once those shows dried up, Campbell moved on to a number of other projects, most notably his long run on the cable series Burn Notice. However, he never quite left Ash behind, no matter how hard he tried.

In nearly every interview I've read, Bruce Campbell is asked about a return to the Evil Dead universe, and no matter how big and famous Sam Raimi gets, the fans always hoped that he had another movie in him. Our prayers were answered with the announcement of the Ash Vs. Evil Dead TV series, but is it too late to recapture that magic? Has the ship sailed? Will this be anything more than a cash-in? All of these completely valid and reasonable questions are asked and answered in the first season. For the record, the answers are no, no, and no.

We return to the world of Ash Williams 25 years after the end of Army of Darkness (that's the ending of the US theatrical cut of the films, for all of the nerds out there counting), where an older Ash finds himself still slinging toaster ovens in the housewares section of a local department store. The aging Ash is a bit pudgier than when we last saw him, and age has certainly taken its toll on his movie star good looks, but he's still a handsome dude with a tongue that cuts like a knife and wit quick enough to cut short almost any criticisms of his life choices.

Ash lives in a trailer park where he remembers his glory days and guards the abominable Necronomican Ex Mortis, the Book of the Dead, that got him into trouble all those years ago. And by "guard," I mean he uses it to impress lonely trailer park chicks into fooling around. One night, in the midst of just such a salacious endeavor, he decides that in order to seal the deal, it's going to take a little demonic poetry reading, so he cracks open the book and spits a few rhymes, opening the doorway to Hell in exchange for a handy.

As one might expect, things start to go a bit pear-shaped, and the race is on for Ash to correct his world-endangering mistake before the demons take him out and the rest of humanity with him. What is new to the formula this time around is a pair of sidekicks in the form of his retail co-workers Pablo (Ray Santiago) and Kelly (Dana DeLorenzo), who get roped into his quest kind of against their will. Along the way they cross paths with many foes, both well-known (Lucy Lawless as the daughter of Ash's Evil Dead movie girlfriend) and mysterious (Jill Marie Jones as an FBI agent on the hunt for a serial killer that turns out to be Ash). It's a fun, if messy -- both literal and metaphorical -- ride through a world in which the dubiously prideful Ash is the most capable person on Earth. A daunting prospect, indeed.

One thing about Ash Vs. Evil Dead that popped out at me within the first few minutes is the fact that they are no longer obligated to deliver a PG-13 product. This series was shown on pay cable, Starz, and therefore they could make it as nasty as they wanted, and the team really earns that TV-MA rating right from the get-go. There is gooey gore that makes Evil Dead 2 look like a kids' movie and foul language that would make a sailor blush, but it all makes sense in this world that is crumbling around Ash. He's trying to keep it together, but the stakes have never been higher for him, and even though the world has grown up around him, he's still a perpetual teenager who believes he's bullet proof, and surprisingly, he's pretty much right.

The series pulls out way too many characters and draws upon too many setpieces for it's short run, but I can't deny that I had fun with all of them. These initial ten episodes are a blast to watch, but you can definitely feel the pressure from the writers to get as much on screen as possible, just in case they don't get a second season. By the time the series winds up, they've settled into a decent groove and I'm definitely down for more of this Ash and his wily compatriots. Count this series as a win in my book.

Ash Vs Evil Dead looks and sounds great in HD. This series was shot for TV, so the image fills the frame nicely and I have no technical qualms about this presentation. It looks even better than it did during its original broadcast.

Anyone who has ever owned any of the numerous DVD or Blu-ray releases of the Evil Dead films knows that this team is one that loves bonus material and has an amazingly entertaining rapport. This set goes a little light on the bonus material given the people involved, but there are some gems in here that are definitely worth while.

The second disc holds three bonus featurettes, none of which are particularly in depth, but all of which are pretty fun. The longest of the three is the 16 minute Inside the World of Evil Dead which is an extended EPK that features all the principal cast members and crew, but mostly comes from the showrunner and is a great, fun look at the series from behind the camera. The other two features are less than five minutes each and will likely be online to view any minute now.

The real fun is in the commentaries. Every episode has an audio commentary track, and while not all of them are all time classics, there are some great ones. The first episode features a commentary from the old school crew of Sam Raimi, Rob Tappert, Bruce Campbell, and Ivan Raimi. These guys have an amazing rapport built over 40 years of friendship. They know how to press one another's buttoms, and are hilariously funny together. If you've never listened to any of their commentaries on the old Evil Dead or Army of Darkness discs, go do that now, they are hysterical.

After the first episode the commentary crew is pared back a bit with Campbell joined by his co-stars Ray Santiago and Dana DeLorenzo for most of the episodes. Campbell sets a great tone that his teammates are able to bounce off of that makes these commentaries great fun to listen to. Toward the end of the series Campbell disappears for a bit, but Santiago and DeLorenzo are joined by Jill Marie Jones for a few tracks, and the tone that Campbell set makes these Campbell-free episodes really fun to listen to. When Campbell rejoins the team toward the end, hysterical laughter ensues. These are truly great, informative commentaries that really reward rewatching. Great stuff.

When this series was first announced for Blu-ray there were no special features mentioned. So, when I got the set in the mail and there were commentaries listed on the cover, I couldn't have been happier. This is a quality release for the series and it definitely has me very excited for its return on the Starz cable network this fall.

More about Ash vs Evil Dead