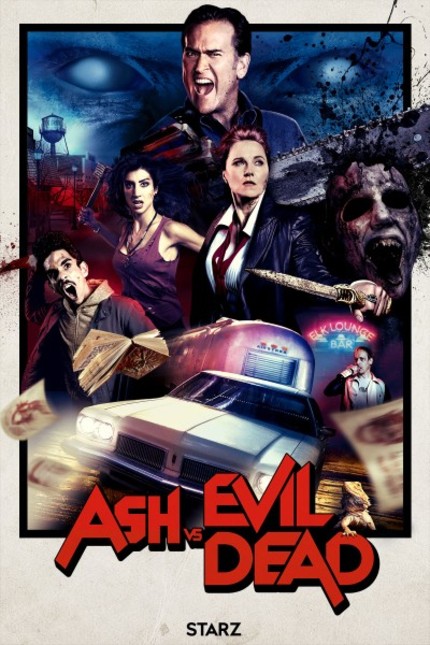 More hailing to the king will begin this October as Bruce Campbell repeats his role of Ashley J. Williams. A blast from the past, the retro/nostalgia fad on small screens is dusting off properties such as eagerly anticipated groundbreaking 90s darling, Twin Peaks. Evil Dead, the cult classic Sam Raimi built his career on, certainly suits the criteria for the nostalgia small screen exhumation, but also belongs to another trend as well - the serialization of horror franchises.

The A&E television series Damien - based on The Omen franchise - bombed and was axed soon after wrapping its first season. A premise of an Antichrist with a Messianic complex sounds intriguing but the writers managed to drown the show in repetition, losing the momentum early on. Fox will take a similar stab at genre-defining material with The Exorcist, calling priests into action in September. And of course, in October, the return of the chic and mad one that started the cult craze, The Rocky Horror Picture Show.

The cocky chainsaw and boomstick-wielding, sarcastic line-dropping anti-hero Ash, depicted by the one and only Bruce Campbell, made a comeback on the Starz channel. The aged womanizer jumps back into the saddle, and a ramshackle caravan, to hunt down an ancient evil he accidentally summoned while being high in an attempt to make a pussy magnet out of the Necronomicon thirty years after the events of original Evil Dead (and 24 years after Campbell last stood in the shoes of Ash in front of the camera). After deadites - people possessed by evil - start making a commotion around Ash eventually pinning police on his butt for a series of extremely gory killings, he had no other option than to revive the good ol´ routine. His dull and lonely existence welcomed it anyway.

Ash and his two co-workers from the store, one of which adores him and calls him El Jefe, hit the road for the final showdown at the cabin in the woods where it all began. The creators respected the original spirit of the film ensuring the link through myriads of callbacks and most importantly delivering the high dose of humor and  gory schlock. Besides Evil Dead´s mythology, the production team used old-fashioned practical tricks whenever possible to preserve the nostalgia untouched by VFX. Lucy Lawless joined the series as Ruby Knowby hellbent to get her hands on the Necronomicon she claims belongs to her. After the call of duty in the upcoming season, the unholy union between Ash and Ruby appears imperative to take down the new adversary. In addition to more screen time for Lawless, Lee Majors got on board as Ash´s father foreshadowing the return to the protagonist´s hometown where he is called Ashy Slashy for his reputation as a psycho. Ted Raimi appears as Chet, Ash´s high-school best friend.

Ash vs Evil Dead premieres in October on Starz

More about Ash vs Evil Dead