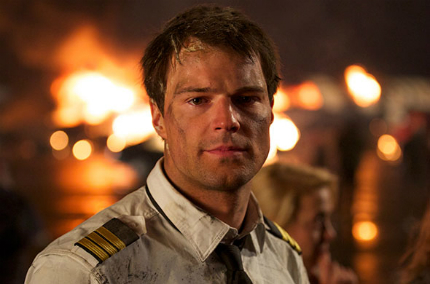 A new trailer for Infierno en el Cielo gets right to the point: this is a crazy airplane thriller (apparently) that you probably won't want to watch if you have a fear of flying and/or are taking a flight anytime soon.

Originally titled Ekipazh, it's a Russian movie, directed by Nikolay Lebedev. Our own Todd Brown discovered the Russian-language trailer and other information last November. The English title at that time was Flight Crew. Here's the synopsis:

A young pilot gets kicked out of the military air force after breaching an absurd order. He starts working as a second pilot in the civil aviation. Always straight-forward, he is not on best terms with his new colleagues.

During a flight to Asia his crew receives an alert about an earthquake on the volcanic island and takes a decision to fly a dangerous rescue mission. Only together the crew can survive the disaster.

The movie opened in Russia in April and is now due for a theatrical release in Chile on October 20, thus a new, different Spanish title (literal translation, "Hell in Heaven," but officially The Crew). The trailer gets right to the Infierno in its title. You can watch it below, along with the original Russian trailer (which is a bit balky at times).

Question ... is this a remake , because if whenI looked at the trailer, I found another link to a Russian film from God knows when that seems to be a similar premise ... https://youtu.be/znJ4ovtOzBY

When Todd published this last year, a commenter said it was a remake. I haven't seen, so ...

Peter thanks for the reply ... yeah I found a few more clips , but even if a remake it looks like fun.