When screenwriters turn towards directing their own features, the case is often that they can make their talkiest screenplay into a film. This is not necessary a bad thing at all, especially considering the case of Mateo Gil's new science fiction tale, Realive (aka Proyecto Lazaro). Here is a film which asks a lot of astute science fiction questions around death and resurrection as our twenty-first century medical science advances towards growing organs, rejuvenating the body with stem cells, and cryogenically preserving the dead or the dying in the hopes that they may be attended to in the future. The corporation at the heart of the film's Lazarus Project has a witty tagline that demonstrates some of the nuanced qualities of the screenplay, "Immortality is only a question of time."

You are probably familiar with Gil's work if you have watched any of Alejandro Amenabar's cerebral but scary films, from Tesis to Abres Los Ojos (remade with Tom Cruise as Vanilla Sky) to Oscar nominated The Sea Inside and the criminally underrated sword and sandals flick on mathematics and religion, Agora. Gil is to Amenabar as Alex Garland is to Danny Boyle. And the adroit, glossy and verbal Realive is certainly Gil's Ex Machina.

Structured in three layers, the film examines the case of Marc Jarvis, the first man to have his body pulled out of Cryo and re-constructed to the point where he can be paraded out in front of investors to further justify private company funding for perhaps the immortality of the human race. Much of the film is set in 2086, and involves the medical processes, and complications, in rehabilitating Marc's body while acclimatizing his mind to 70 years of progress. Marc's nurse explains (and demonstrates) that attitudes on sex and relationships have significantly changed in the 7 decades he was absent, and the film teases us with demonstrations on the way the internet is now fully audio-visual, and offhand mentions that nobody gives a shit about pulling oil out of the ground for energy or raw materials. Oh, and t-shirts have no neck-bands on the anymore.

Because the film is as much about the humanity as it is about the science, a second, quite significant, layer of the films structure spends a fair amount of time with Marc in 2016. He deals with the fallout of being diagnosed with cancer in his mid thirties, and the tough decision with his fiancee, here, exceptionally played by Game of Thrones' red wedding bride, Oona Chaplin, to commit suicide to preserve his body in the best possible shape for the slim hope that the freezing process will work, and that the company will last long enough until such a time comes to resurrect and heal the disease. The emotional crux of the matter, handled with lots of time and energy in the film, are potentially months of lost last days in Marc's voluntary and pre-mature death. Upon his awakening, there is the anxiety that everyone he has ever had any ties will may be gone. Marc makes jokes over wine to his friends when he announces the decision, "I'll be sure to fuck all your grandkids!" But, the levity is a cover.

There are several strata of anxiety on display here, both big picture and on an individual level. Science of course, does not work perfectly, nor free of the unexpected, and being an early test subject, Marc suffers immensly in his new body. Fans of Showtime's exceptional medical inquiry show, The Knick, or those who may remember a certain scene from Alien: Resurrection will have a field day with how Realive understands that science, in execution, is a messy process of trial and error and far more disappointment than elation. Success is just failing not as badly. There is a classical mix of hubris and fear that has driven scientific speculation in popular art for centuries. A more daring step by Gil however is to make Marc neither the hero type, nor one who necessarily rises to the occasion of his own trail. This puts him in line with the characters of Ridley Scott's vastly misunderstood Prometheus, where the so-called heroes were kind of shallow fuck-ups, with little self awareness of their own limitations. 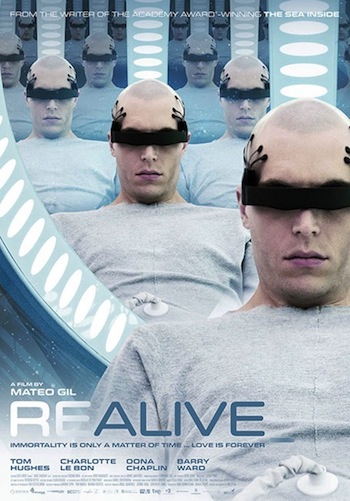 Speaking of the Frankenstein analogy, it is interesting here that it is Marc himself who declares, "I'm Alive! Alive!" as his team of beatific good-looking scientists smile at what they have accomplished. This is a veneer, however, because like a living foetus, Marc has to be chained via umbilicus lest his body deteriorate with all the new organs, nerve augmentations and implants. They tell him to be realistic about his expectations going forward in the future, it will be one of limitations. If life is pain, Marc is aware at all times, and more so he is aware that he is as much an elderly or a toddler in his medically assisted existence. With little support system outside of the company, this weighs greatly on his will to live. It also reminds us how what the large ecosystem of nature does so...er...naturally, is nearly impossible to re-create in the lab without unintended consequences. Nikola Tesla's line in The Prestige, "Exact Science, Mr. Angier, is not an exact science."

Marc also has to contend with being show-pony for a company that is rife with complex Non-Disclosure Agreements and private-public partnerships. Both of which we are led to believe are hard to manage with the invention of Mind Writer, a new, world changing device that allows anyone to record and save their thoughts, dreams and memories into video data for the consumption of others. A bon mot from Marc's head-doctor is the clever aside regarding the consequences of our social-technological gizmos which rings of truth, "Millions of people today lead completely normal lives without remembering anything!" On top of all the overwhelming changes in the future, the most difficult one might be waking up and being considered, at least for the time being, a piece of someone's property. In a more or less benevolent way, Marc is a medical slave to human progress, in the same way that Ava's nascent A.I. entity was in Ex Machina.

With all the ideas bubbling around in this film, the more immediate analogue is Jaco Van Dormeal's Mr. Nobody. Gil is far less fanciful or fractured in his execution, and he holds hard and fast to the science, but he very much interested in making a good looking film that grabs the futurism bull by the horns, and isn't afraid to throw a lot of stuff at the audience all at once. This might be overwhelming, but and make the film feel unfocused to some, but the film fixates exclusively on the experience of its central character, his former relationships, and current situation As such, things mainly stay on the rails despite so many opportunities for runaway tangents.

Large montages, via the Mind Writer device, offer impressions on how we keep and prioritize our memories, experience, and thoughts, and the value of these things in make us what we are (shades of another Ridley Scott science fiction masterpiece, Blade Runner). It also offers insight into Marc's state of mind, his own priorities and where his love for those he left behind is an anchor towards moving forward in a brave new world. Marc's existence is more a purgatory than a fresh new start. Clips from Martin Scorsese's Last Temptation of Christ woven into the film underscore a kind of Lazarus paradox, with particular emphasis on the complex facial expression on Willem Dafoe's Jesus as he pulls the resurrected man from the cave.

A recurring image is that of people diving into the water, seen underwater in super-slow motion, with the body suspended (trapped?) in in the deep, surrounded by millions of tiny bubbles; chaos and beauty. It might be a particularly new notion (nor a pretty one) but immortality would very likely be terrible for the human race. Mortality drives us to do what we do, and the finite time with the people around us offer a framework for navigating the fear of life to the peaceful acceptance of our inevitable death. Realive is not so much a movie about beating aging, it is one about aging gracefully when timing and circumstance almost never line up in a harmonious fashion. Indeed, it is a question of time, and this movie is certainly worth something of yours.