Review: TEENAGE MUTANT NINJA TURTLES: OUT OF THE SHADOWS, Funnier Than The First One 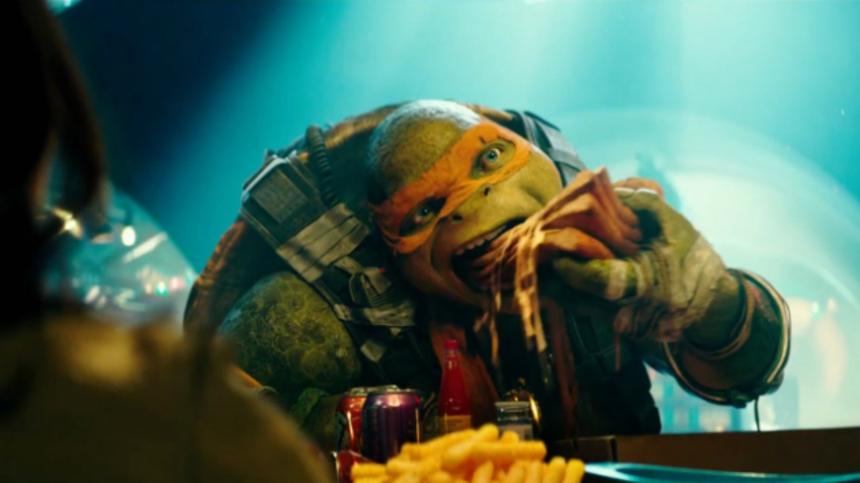 Superman had it easy.

He was a superpowered immigrant who came to America as an infant in the 1930s, and made his big-screen debut in animated shorts in 1941. By 1978, most people never thought about him. Comic books were viewed as a lower form of creative expression, suitable only for children and basement-dwelling men, and so his return in Richard Donner's Superman was greeted with a mixture of curiosity and mockery at the very idea of a man who could fly.

The Teenage Mutant Ninja Turtles began life in America as undocumented workers in the 1980s, and made their big-screen debut in a feature film in 1990. By 2014, however, most people were aware of the characters, at least those who paid attention to pop culture, and so their return to the big screen in Michael Bay's Teenage Mutant Ninja Turtles was greeted with a mixture of apprehension and derision at the very idea of turtles who could talk and were teenagers and were ninjas. (Sadly, the idea that they lived in New York City sewers was far more relatable and far less questioned.)

The Michael Bay connection was key to how the 2014 film was made and marketed. He served as one of several producers, and leading lady Megan Fox had been introduced to the world in Bay's Transformers (2007). Furthermore, the film was made in the style of Transformers (and Bay's earlier works), albeit at a lower budget, built around extended action sequences that were outlandish in their ambition and incomprehensible in their execution.

All of which makes Teenage Mutant Ninja Turtles: Out of the Shadows a rather surprising sequel. To be sure, the movie is still built around extended action sequences that remain as inscrutably ludicrous as any to be found in Bay's oeuvre. This time, however, the director's chair previously filled by Jonathan Liebesman belongs to Dave Green, who previously made Earth to Echo. That film was sabotaged by the decision to make it in the found-footage style, and its over-reliance on its multiple sources of inspiration. What makes this film far more endurable is its tacit acknowledgement of its own nature, namely, a juvenile vehicle suitable for teenagers who have just learned how to drive. The teenage portion of their moniker reminds that the turtles are adolescents, prone to silliness even as they aim for maturity. Much more than the first installment, the new film embraces humor and refuses to take itself seriously.

The supporting cast reinforces this notion, replacing the fine professionalism of William Fichtner's wealthy industrialist Eric Sacks with the overtly goofy Baxter Stockman, played broadly by Tyler Perry. Baxter is more of an inadvertent foe, who is drafted by the last film's primary villain, the returning Shredder (Brian Tee) into new schemes.

Shredder is also supported by criminals Bebop and Rocksteady, who are mutated into a rhino and a hedgehog warthog.* Their character designs are big and sloppy and not terribly pretty, much like another villainous blob who lives in the stomach cavity of a robot ---

-- and, to be blunt, it really doesn't matter what the plot is. Green keeps the pace light and propulsive, and the good guys battle the bad guys, and heroic corrections officer Casey Jones (Stephen Amell, better known to me as TV's Arrow) teams with intrepid reporter April O'Neil (Megan Fox, in a well-suited role), pushing April's former TV cameraman Vernon Fenwick (Will Arnett) into the background, which also suits him and the movie well.

Teenage Mutant Ninja Turtles: Out of the Shadows may not be, necessarily, a good movie, but it's a relatively modest would-be blockbuster that distinguishes itself as something more than a junior-sized version of Transformers. To pay it a compliment, it's funnier than the first one, and that's not a bad thing.

The film opens wide in theaters across North America on Friday, June 3 and is also opening this weekend in many territories across Asia, Europe, and South America.

More about Earth To Echo