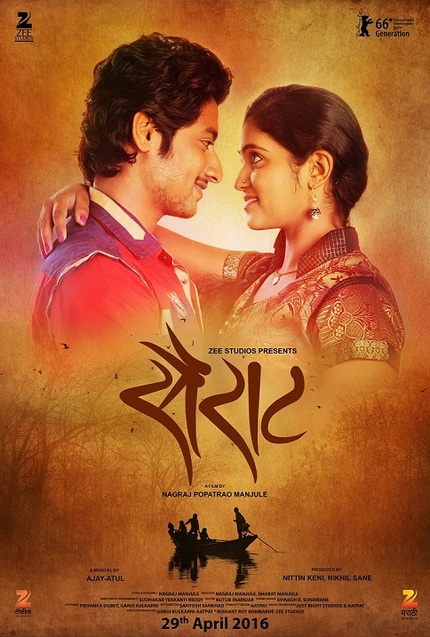 Two years ago I saw a film called Fandry in connection with an Indian film festival and it broke me.

Rarely am I at a complete loss for words over a film, even if it takes a while to put my thoughts together so that they come out in a way that makes sense, I can almost always eventually express my feelings about movies. Fandry broke that in me. That film, the story of young love across castes in rural Maharashtra, was so powerful that I couldn't even think of sullying it with my clumsy words, it deserved better. In the time since, I've recommended Fandry to anyone who will listen. Maybe I can't do it justice, but that doesn't mean that I should keep silent.

Nagraj Manjule, the director of Fandry, is back with his second feature Sairat, and this time I can't cop out. I have to put my support behind this film, I have to at least try to tell the world that there is a beauty and truth in Sairat that goes beyond anything we might expect or even deserve. This is the birth of a new talent and an exceptional voice that doesn't come around very often, and we can't ignore it. You owe it to yourself to experience the beauty, exhaltation, and pain that Sairat has to offer.

In the village of Bittergaon there is a boy, Prashant Kale (Akash Thosar), and a girl, Archana Patil (Rinku Rajguru). Prashant (Parshya for short) is a common boy from a lower middle class family, as determined by their income and thousands of years of caste politics. Archana (Archie) is the daughter of the local political leader, the jewel of an upper class family, and a firecracker who says what she thinks and does what she wants. Parshya has eyes for Archie, but the gulf between their social station is far too wide for him to even consider crossing. That is, until Archie discovers that this boy is more important to her than anything else she ever had or wanted. The two meet, fall in love, and live the life they always wanted.

At least, that's what should happen.

Thr truth is always more complicated, but after hundreds of tales of star-crossed lovers, we have become used to the idea that no matter what kind of obstacles they face, the power of love is what will ultimately save the day. Like Hollywood, Indian cinema has a wealth of stories of star-crossed lovers, it's a story the world knows well, and it is a story that will always get butts in seats. However, because this story of true love conquering all is so well known, there are expectations in place for what the outcome will be and how the story will arrive at its conclusion.

Sairat is a difficult film to talk about in terms of plot and story because those two elements account for much of what is unique and surprising about the film. For the first two hours it plays out as one might expect, a rollicking romance across social lines. Sairat is filled with all of the elements that bring joy to any Bollywood fan. The characters are charming, the songs and music from Ajay-Atul are infectious and impeccably crafted, and the romance progresses at a socially acceptable pace, even as the pair fight to keep it secret.

However, it isn't what you expect, or even what you think you see in Sairat that makes it so exceptional. As I was watching the film I thought to myself around the hundred minute mark that this might be one of the greatest love stories I've seen in a decade. Mainstream Bollywood wishes it could craft stories so comfortably familiar but imbued with the unbridled enthusiasm that only comes from young love. They wish they had music as powerful as this remarkable score from Ajay-Atul that supports the emotional weight of this story without feeling trite or reheated. They wish they had young talent like Thosar and Rajguru to pull it all off as though they were born into these roles.

Sairat is an overwhelming and exciting experience from the word go. Even as Parshya and Archie are eventually caught in each others arms and their romance goes from secret and small to the stuff nightmares are made of, the feeling remains. Even as Archie's parents demand not only that she stop seeing him, but also that he and his entire family are punished for their transgressions, we are ensured that there will be joy, there will be love, it's just out of sight, around the next corner.

That's the power of these characters, this story, and this experience. That hope would be enough. It would have been enough for the film to follow through on the romance of Parshya and Archie and to see them through to their happily-ever-after. It's what they want, it's what the audience wants, it's what we feel we deserve after having cheered for these two through their trials for two hours. But Manjule has other ideas, and where he goes with Sairat beyond that that happily-ever-after is what makes this film special and unique.

Everything about Sairat is exceptional. In fact, if I didn't know better, I would say that Manjule only made this film to show Bollywood what a piss poor job they've been doing all of these years. Manjule challenges the audience at every turn to accept his demands of them. Follow me here, deal with this abrupt tone change, look into the life you wished for, is it everything you wanted?

He takes the demands of the audience, the wish for a beautiful resolution to Parshya and Archie's romance, and acquiesces to it, but not without asking for something in return. You must follow through. You wanted them to be free, you wanted their love to survive, now, you must watch what that means.

Sairat is astonishing filmmaking, from the joyous opening frames all the way through to the breathtaking conclusion. You will never see it coming, but you'll also never forget it, and that's the sign of a true classic.