Chris is a thoroughly modern woman in-the-making, but held back by a still very much conservative, religious, patriarchal society and her love of the land. She is an educated girl who wants to become a teacher, an honest and noble profession, but her circumstances hold her back from achieving that goal.

Her mother, even though worn out by childbearing -- six kids and counting -- and by her overbearing husband (Peter Mullan at his most brutish), still insists that there's more to life than books and studies. But after finding out that she is pregnant again in her middle age, she has a mental breakdown and takes her own life along with the newborn twins.

After much abuse from pa, Chris's mild mannered, loving older brother, Will, also bails on her gets married and moves to Argentina. Pa reluctantly sends away Chris's two younger siblings to live with the relatives, leaving only Chris to take care of the house and the farm. It becomes unbearable when pa has a stroke and becomes bedridden, leaving Chris to endure all the hardship alone.

Things takes on a brighter side after pa's death. With a little money she inherited and the farm, she marries a charming neighbor farmer named Ewan (Kevin Guthrie) and bears a son. Everything seems hopeful and bright, but World War I comes rolling in and Ewan gets conscripted.

Never into the idea of leaving home and fighting the war, the couple is very opposed to the idea at first, but everyone around them in their nationalistic fervor -- the church and macho men -- keeps egging Ewan to go. After seeing the horrors of war, Ewan is a changed man and becomes abusive toward Chris. Their relationship gets strained beyond repairable and he takes off for another tour without saying goodbye. 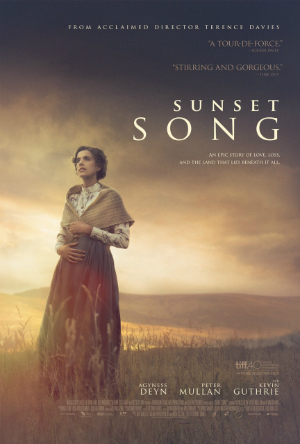 It is easy to see why many regard Davies as the greatest living British filmmaker. Impeccably crafted, shot in glorious 70mm, Sunset Song is a stunning achievement. We've seen sweeping crane shots through swaying wheat fields before on screen in Terrence Malick films and his countless imitators, but not like this.

Nature is worshipped but in a different way than American Westerns. Constantly raining and wind-swept, the Scottish countryside doesn't have that mythic, ethereal quality, but it's more lived-in, its edges dulled by years of cultivation and contant presence of livestock. Still, on the big screen, Sunset Song is a truly cinematic experience, even more visually ravishing than his autobiographical, Liverpool set masterpiece Long Day Closes.

It's in the casting, too; Deyn, a British model whose tall stature and fine, graceful features, truly belong to the era. Always in the center of the screen, erect and defiant, yet vulnerable, seeing our heroine in the autumn field evokes a lot of different emotions. Equally painterly are the interior scenes; shot on 4K digital, Davies and his director of photography Michael McDonough favor naturally dark rooms with warmth coming from fireplace and sunlight coming through the window.

Just like many of his other films, Sunset Song is a tragedy of a woman caught in the changing times. Adapted from the revered Scottish novel by Lewis Grassic Gibbon, Sunset Song is a lamentation on time passing, the loss of a way of life, and a love song to its inhabitants' attachment to the land. Davies captures the essense of the book beautifully. I just wish I had a good ear for languages to enjoy the film more. See the film on the big screen! It's glorious!

Sunset Song plays as part of the Terence Davies Retrospective at Museum of Moving Image May 7-22 and opens theatrically at Film Forum and Lincoln Plaza Cinema on May 13.

Dustin Chang is a freelance writer. His musings and opinions on cinema and beyond can be found at www.dustinchang.com

Do you feel this content is inappropriate or infringes upon your rights? Click here to report it, or see our DMCA policy.
Agyness DeynMark BonnarPeter MullenTerence DaviesUK