Review: HIGH-RISE, A Provocation To Disengage 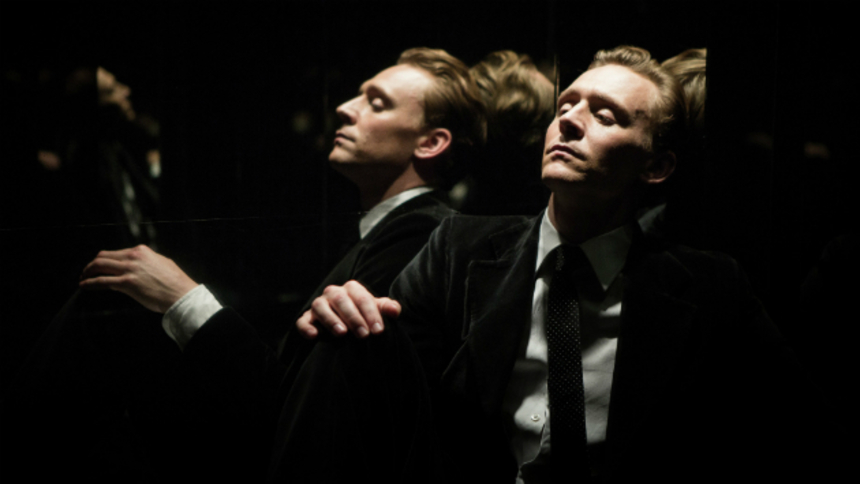 As audience empathy tests go, killing the dog is perhaps the most capital of movie-crimes. Here it is gleefully committed in the opening minutes; a bellwether for the casually curious to beware.
Several other canine-murders are peppered throughout the film, each more grim than the last, lest you miss the point. Subtlety, of course, is not the aim here; the film's central and titular edifice is a super-sized, dangerously insular apartment building where the floors at the top are bent, both figuratively and literally; a representation of 'society' in microcosm.
And we, at long last, arrive at the point where the oft-juggled adaptation of J.G. Ballard's 1975 novel, High Rise, makes it to the screen. At one point director Nicolas Roeg was scheduled to make it, at another Vincenzo Natali was attached. Ben Wheatley (and his writing partner, Amy Jump) deliver a retro-futurist grotesquerie of hate and suffering. It's a cinematic endurance test, as it were. Wheatley has never been one to let a lot of empathy get in the way of his comically brutal style of filmmaking, and he has managed to squeeze out every last drop of it. This is triple distilled satire, to be served cold with a garnish of mania.
Tom Hiddleston, here a lean but blank slate, plays Dr. Robert Laing. A successful neurosurgeon recently recovering from an vaguely alluded to family tragedy, he is looking for both anonymity as well as a way to move up the socioeconomic ladder. This disturbingly massive condo tower is built on the edge of nowhere. Seagulls cry desperately on the soundtrack, often, but are never seen. We see only their shit dropping from the sky onto the endless field of 1970s automobiles and parking-lot skirting the building. 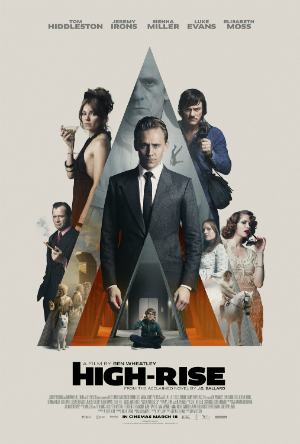 It is a recognizable kind of addled future-version of Britain along the lines of Brazil, only with far more smoking, and sideburns (courtesy of an unrecognizable Luke Evans). Wheatley has set the film at about the same time as the publication of Ballard's novel. An interesting choice, because the promise of the future looks stale, ugly and dank.
Being the first of many such buildings under construction, which we see in wide, slightly dodgy CGI inserts, early adopters of various social strata get to participate in the process of working out the bugs. Of which there are many, including wonky elevators, thermostats and the occasional brown out. The architect of the project, Mr. Royal (wobbly played by Jeremy Irons), resides in a verdant, almost medieval idyll at the top with his crazy wife, who holds Marie Antoinette by way of Gatsby parties for the residents of the upper floors. His vision for the project is "a crucible for change."
And that it is.
Or something.
The filmmaking here feels more like a challenge to disengage with the material. Yes, it is very punk and all, but so what? One can cringe at the bacchanal excesses of the upper floors, observe the emptiness of Dr. Laing's unpacked non-existence, or giggle a bit at Elizabeth Moss's absurd pregnancy belly and her sea of neglected children on the lower floors. This is not so much a story as a montage played out in very slow motion.
Other than the broadest strokes, the geography and tenants remain ill-formed, ghastly cartoons. High Rise is not a film with any interest in exposition, favouring a fever-dream aesthetic where scenes and ideas do not mesh together cleanly. This is the science fiction nightmare of unfettered capitalism and British gossip. Even though we are pre-Reagan/Thatcher, shit trickles downward. In short order, the building degenerates into cannibalism and chaos. Cocktail parties turn into war parties. The dogs are the first to go.
Lots of the film's characters throw stuff off ledges: iced-cream, garbage, eventually people. Perhaps the intent was to push the boundaries of cinematic grammar, taste and indeed the viewer over the ledge by proxy. Soon after the first act set-up, everything begins to rot like the peaches in the 15th floor supermarket. Anarchy does not so much as build, it was already there, the restraints are just cut away. The rhythms however, are simultaneously too fast and too slow, before things eventually metastasize into a monotonous organ grinder. Absent of nuance, the humour is merely mean.
At the end, Mr. Royal laments that he is the architect of his own accident. High Rise, if you will pardon my French, is auteur in that regard.
Review originally published during the Toronto International Film Festival in September 2015. The film is now available to watch via various Video On Demand platforms. It will open in select theaters in the U.S. via Magnolia Pictures on Friday, May 13.
1
Sign-In to Vote
Tweet 0 Submit

Do you feel this content is inappropriate or infringes upon your rights? Click here to report it, or see our DMCA policy.
Ben WheatleyElisabeth MossJeremy IronsLuke EvansSienna MillerTom Hiddleston

I'm a huge fan of Wheatley and was super excited to see this at Fantastic Fest. I actually fell asleep halfway though this film which is extremely rare for me. I watched the whole thing a week or so ago and I completely agree that the film is all style and no substance. Every character is a paper-thin caricature, the effects are awful, the pacing is dreadfully slow and the editing is a hot mess. Some of the actors turn in admirable attempts but the material they have to work with is just too weak.

People had similar complaints about art over substance with A Field in England but I really loved that one. I'm not sure how it managed to go so wrong here but the result is my least favorite film thus far from Wheatley.

Finally! A review that said it as it is. The movie was pure torture to sit through.

Part of me loves the film, part of me hates it. It's not rare for me to like divisive films, but it's rare for a film to actually divide myself. I didn't like it. I want to see it again. Grrrrr...

(Note: the Portishead cover of Abba's SOS is almost worth the price of admission already, all by itself)