Review: BELLADONNA OF SADNESS, A Spellbinding Work Of Carnal Beauty 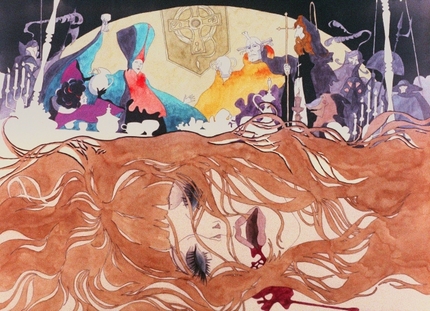 This project, the last film in a trilogy produced by manga legend Tezuka Osamu (Astro Boy), is an astounding compendium of off-center animation styles blended with dreamy '70s folk mysticism and Renaissance fair aesthetics that will blow your mind. Whatever you're imagining going into Belladonna of Sadness, you're sure to be surprised at least a half dozen times by the time the credits roll, and that is a joy that has become increasingly rare over the years, and something to cherish.

The story for Belladonna of Sadness stems from a French book by Jules Michelet titled La Sorcière. While in no way a straight adaptation - Michelet's book is non-fiction - Belladonna of Sadness instead adopts the themes and hysteria of the 18th century witchcraft scares into a more sympathetic reading of the way of life associated with sorcerers and sorceresses. Yamamoto's film would take the concept of the tortured woman forced into sorcery as a means of coping with oppression and trauma and retools it as a grand scale rape-revenge fairy tale. While elements of the story feel very familiar, it's the alternately barren and baroque styles of animation that are the true revelations.

Jean and Jeanne are a happy couple in an unnamed medieval kingdom who recently married. As is the custom in their homeland, the husband Jean turns up at the king's castle to offer a tribute in exchange for the blessing of their union. However, when the decrepit king and his vicious queen decide that his tribute is too petty to accept, they decide to take out the difference in flesh and pain by deflowering the virginal Jeanne in the most horrific and violent way.

Emasculated and defeated, Jean returns to the couple's home where Jeanne attempts to revive him with kindness and assurance that everything can start anew. Her husband is beyond destroyed at the victimization he just witnessed and sinks into a deep depression. Upon seeing her once happy life ruined by a power mad ruler, Jeanne's anger summons a small, frisky, penis-shaped demon who promises her vengeance in exchange for her body and soul. At first she balks at her soul being taken, but as she already feels her body is worthless, she relents, and a grand guignol styled psychedelic descent into madness, revenge, and hedonism follows.

The film feels very much like the product of a very strange stew of animators. The film opens with a series of narrations that play over some very lilty folk music while the camera pans across impossibly lush watercolor illustrations designed as tapestries to tell the story. There is almost no traditional moving animation for the first half hour or so, and this was at first a bit disconcerting, but as the film moves along, it becomes clear that the method is a great part of the message and it all starts to make sense. From these still life water color paintings the film moves to very kinetic R. Crumb styled psychedelic dream sequences, infrequent bursts of traditional animation, and then back again in a neverending collage of emotions.

The pastiche of artistic styles is matched by the broad spectrum of obvious and obscure references. The story of the demon promising a successful revenge is quite Faustian, a theme that recurs througout the film. For every bit of success she gains in making her tormentors suffer, she pays the price with her own corporeal and eternal soul to the devil, here expertly performed by the extraordinary Nakadai Tatsuya (Ran, Kagemusha). Her pursuers certainly suffer, but at what cost to her own sanity?

Belladonna of Sadness is the rarest of opportunities, it presents the viewer with a chance to see something that is completely unique and unbridled. This is the work of a filmmaker and team who had a passion for the project that extended beyond a simple desire to tell a story. The sheer sensuality of Belladonna of Sadness and its overwhelming beauty is enough to make one well up with tears.

This is the kind of experience that only cinema can provide, and in this case it is so utterly brazen and undeniably bold that it demands an audience. Submit, dear viewers, you owe this to yourself, Belladonna of Sadness is a film that demands the biggest screen possible. Seek it out and you will be rewarded.

More about Belladonna of Sadness