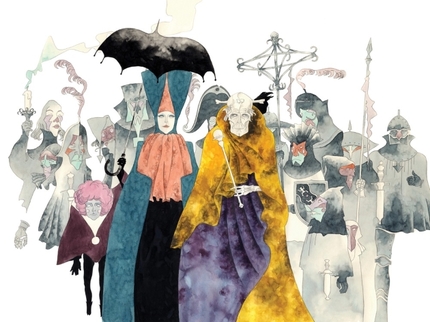 The final film from independent Japanese anime producers Animerama is a wondrously absurd product of its time that feels completely at home in the early '70s, post Summer of Love dystopic psychedelic era that produced so many of Japan's finest anti-establishment films, and is also utterly timeless. I caught Belladonna of Sadness at Fantastic Fest in Austin last fall and was completely blown away by its unique vision of the world and approach to telling an animated story.

American adults of a certain age may remember the children's special program Free to Be... You and Me hosted by Marlo Thomas (That Girl), a part-animated, part-live action musical variety show that focused on showing the equality of the sexes in all areas of society. It sounds very odd, but when I finished Belladonna of Sadness, this was the most apt comparison I could make. It is like the anti-Free to Be... You and Me. Rather than gender equality, Belladonna shows a world of overwhelming oppression of women and the ends to which they'll go to overcome. It's a remarkable piece of feminist fantasy horror that must be seen to be believed.

Cinelicious Pics have gone out of their way to properly restore and market the film, and this beautiful trailer is only the beginning. In addition to the theatrical release, they've partnered with Hat & Beard Press to put together a limited edition 220 page book commemorating the film and the astonishing art within. Believe me, once you see the film, you'll want to know more. I cannot say enough good things about Belladonna of Sadness and the miraculous 4k restoration; you're going to lose your mind when you see it.

In the meantime, sate your lust with this NSFW tease of the film, due in theaters this May

More about Belladonna of Sadness