Out Now On Blu-ray: A LETTER TO MOMO Looks Neat And Crisp 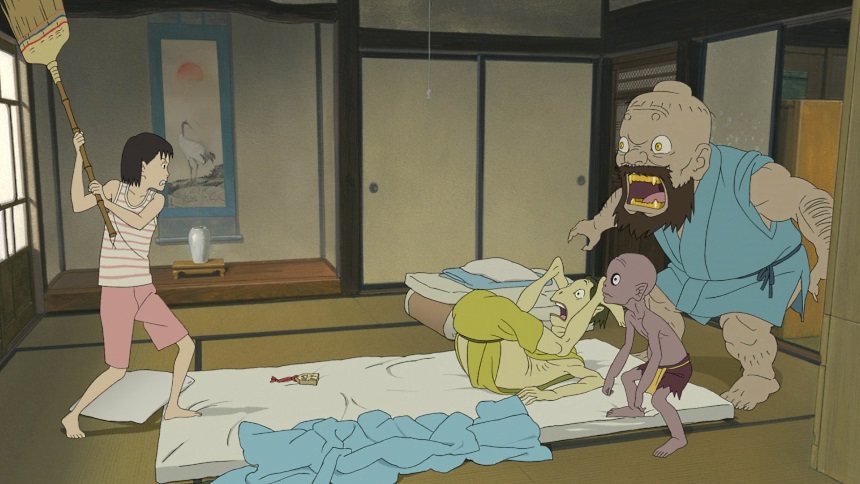 To say that we're fans of Okiura Hiroyuki is an understatement, to say we wish he'd make more films even more so. While his hands have been all over some of anime's best known classics, and his career includes working with Oshii Mamoru and the late, lamented Kon Satoshi, he himself has only directed two films so far: 1999's sublime Jin-Roh: The Wolf Brigade and the more recent (2011) A Letter To Momo. And while these films have both been released West of the Atlantic on Blu-ray, here in Europe we've had to wait a good deal longer to see these appear in English-friendly editions. Jin-roh could at least be gotten on DVD, but A Letter To Momo was conspicuously missing.

Scottish distributor Anime Limited has now at least remedied that with a fine release, one which includes the Blu-ray, the DVD, a nice booklet and some fancy packaging.

In A Letter To Momo, 13-year-old Momo moves with her mother away from Tokyo after the recent death of her father. Momo's last memory of her father is having an unresolved argument with him, and he left her a letter which just reads: "Dear Momo, ...".
But then Momo meets some goblins, supernatural creatures with a link to the afterlife. And if she is able to coerce them, they may be able to get a message from Momo to her father...

Upon its release years ago I reviewed the film itself already, so for now I'll just stick with saying that even though it leans a bit hard on melodrama, it's very very good, with stellar technical merits. Thankfully, these merits have translated faithfully to the Blu-ray. The DVD version looks nice, but the Blu-ray is where the true gold is. As a fairly recent film with digital enhanced animation, A Letter To Momo looks razor-sharp on Blu, with lines and details you could cut yourself on. Okiura Hiroyuki is a great character designer but an even greater animator (several character's movements are fantastic), and it's great to see his work done justice this well.

And for once the English-friendly release hasn't been hobbled in the Japanese soundtrack department, with both 2.0 and 5.1 mixes available. Good English subs are optional with the Japanese tracks, while English SDH subs are available on the English tracks.

As on-disc extras, both the DVD and the Blu-ray feature a great, informative 40-minute making-of documentary, five minutes of trailers, some shadow-test-footage (the film ended up not using shadows as the difference wasn't worth the effort and money), and a gallery of film, background and poster art. This release also includes a great 36-page booklet which contains interviews and design art, and is definitely a nice-to-have.

All in all I'm very pleased with this release and I highly recommend it. A Letter to Momo

Do you feel this content is inappropriate or infringes upon your rights? Click here to report it, or see our DMCA policy.
Anime Ltd.Hiroyuki OkiuraKaren MiyamaYukaDaizaburo ArakawaToshiyuki NishidaAnimationDramaFamily

More about A Letter to Momo