IMAGINE 2012: A LETTER TO MOMO review 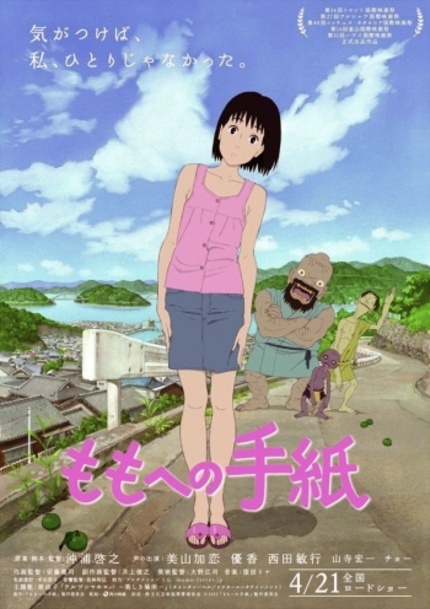 (It is not "Totoro-light", although I guess it can be called "Totoro-heavy"...)

Trying to see anime in the cinema can be quite hard in The Netherlands. The last decade we've seen the latest Miyazaki films released thanks to the international success of "Spirited Away", but for anything else you have to rely on the mercy of film festivals. Thankfully, there are at least two that at least TRY to have some anime in their programming: the Camera Japan Festival Rotterdam and the Imagine Festival in Amsterdam. The International Film Festival Rotterdam used to be an anime hotspot but for the past few years has completely stopped showing these.
Japanese distributors aren't really helping either and are generally reluctant to help arrange screenings outside of Japan.

So it was with great pleasure that I saw Hiroyuki Okiura's "A Letter to Momo" included in this year's Imagine Festival. This film is a domestic family drama with some supernatural embellishments, and does not feature the apocalyptic excess which people over here generally expect from anime.
Okiura's previous film was the excellent "Jin-Roh: The Wolf Brigade", released way back in 1999 so his next project has been long anticipated. Niels even included Okiura in his article on missing Japanese directors (link).

Was it worth the twelve-year wait? Read on!

After the recent death of her father 13-year-old Momo moves with her mother away from Tokyo, towards the old family home on one of the islands. Despite the beauty of her surroundings Momo feels displaced and guilty: the last time she saw her father she had a fight and wished never to see him again. She still carries with her a letter with his last unfinished message, which just reads: "Dear Momo, ...". Meanwhile her mother buries herself in a new job and is hardly ever at home.

Bored and lonely, Momo starts seeing goblins around the old house: weird creatures who are ever hungry and vandalize the village seemingly at random. The goblins initially scare her until she discovers a way to make them bend to her will. And they might even know of a way to contact her father in the hereafter...

Hiroyuki Okiura is one of those people working in Japanese animation who may not be a household name, but has been one of the industry's pillars of strength for many years. Known best for being the director of the excellent "Jin-Roh: The Wolf Brigade" there sure is no shortage of other impressive feats on his resumeé.
How is this for starters: character designer and animation supervisor for both of Mamoru Oshii's "Ghost in the Shell" films, key animator on "Akira", "Roujin-Z", "Metropolis", "Paprika" and "Memories" (on two segments even: "Magnetic Rose" and "Stink Bomb"). Hot damn!
There's more but you get the gist. The man is an anime giant and make no mistake: his attention to detail is legendary within a guild known to contain plenty of nitpickers already.

So it will come as no surprise that "A Letter to Momo" looks stunning. Seven years in the making, Production I.G. has polished this film until it shines. The backgrounds and settings are so beautiful that the tourist boards of the chain of islands where the story takes place can easily use this film in their advertisements. While the supernatural elements are there, the brunt of the animation prowess comes from the depictions of reality and Momo's surroundings. Hiroyuki Okiura also uses roughly the same non-abstract character style as the "Ghost i/t Shell" films and his "Jin-Roh" which is a great boon. I just love that look and it hasn't been overused yet.

Okiura also wrote the screenplay himself and, given the man's penchant for being involved in moody (and often spectacular) science fiction, the story of "A Letter to Momo" is a surprisingly mundane and sentimental one.
In fact, some of the plot-angles look very familiar here: young girl is forced to move to the Japanese countryside, once there she encounters mythical creatures, these creatures end up helping her overcome a personal crisis when things get desperate. With such a synopsis the film gets deep into the same territories as covered by Hayao Miyazaki's "My Neighbor Totoro". That invites comparisons which is dangerous, as "My Neighbor Totoro" is a recognized classic, one of the best films ever made.

If you do compare the two "My Neighbor Totoro" comes out on top as it is far better paced and has better characterization than Okiura's effort has. "A Letter to Momo" takes a lot of time getting to its finale and doesn't quite deliver the emotional payoff it seems to be working towards. Momo gets oodles of screentime but never shows anything of herself other than reactions to what's happening to her. In contrast, a few minutes of the girls playing in Totoro's magic forest revealed a lot about them, both in differences, similarities, being the elder, being the younger, being a child, being responsible...
As such, in mood and execution "A Letter to Momo" more resembles "Summer Days with Coo" although to be entirely honest Hiroyuki Okiura easily wins that comparison. But a bit too often the audience is forcibly told what to feel and when, and when the going gets tough "A Letter to Momo" tries a bit too hard to squeeze tears out of its viewers. Thankfully there is plenty of other stuff happening as well, especially during the finale.

Speaking of the finale, "A Letter to Momo" has a very impressive one and I was glad I saw it on a big screen. But one of the elements involved is a big storm and in Japan this made the film probably more poignant than intentioned, with several of the voice actors directly impacted in real life by last year's disasters.
There sure were a lot of people in Japan last year who were recently bereaved, just as Momo herself is in the film, and I fear what these people made of this film's rather glib plot resolutions, no matter how well-intended...

But now I am probably being too unfair on the film as I mostly had a swell time with it and loved several sequences, which I already look forward to revisiting once this title hits BluRay. "A Letter to Momo" is solid entertainment and very well made. It may not have the infinite rewatchability of... of that other film, but it is definitely one of the better anime made in the last few years. And while I do not love it as much as "Jin-Roh: The Wolf Brigade" I'm still looking forward to what Hiroyuki Okiura will do next.

A beautiful film in itself, "A Letter to Momo" will unfortunately always be compared to "My Neighbor Totoro" and suffer for it as it's just not as brilliant as that classic is. Okiura's film covers similar grounds but is just slightly too cheesy and melodramatic to ever win that fight.
Yet the stunning artwork and detailed description of daily life on the Japanese islands sure makes this one worthy of a few visits. Highly recommended!

The Amsterdam audiences at the Imagine Festival loved it as well, awarding the film a whopping 8.4 out of 10 and making it end firmly in the top 10 of the festival. 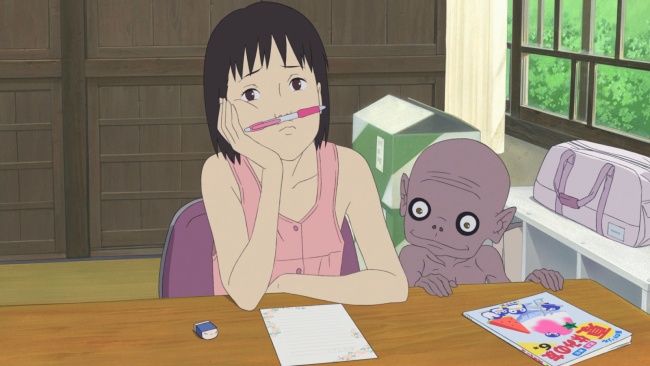 A Letter to Momo

Do you feel this content is inappropriate or infringes upon your rights? Click here to report it, or see our DMCA policy.
Hiroyuki OkiuraKaren MiyamaYukaDaizaburo ArakawaToshiyuki NishidaAnimationDramaFamily

More about A Letter to Momo