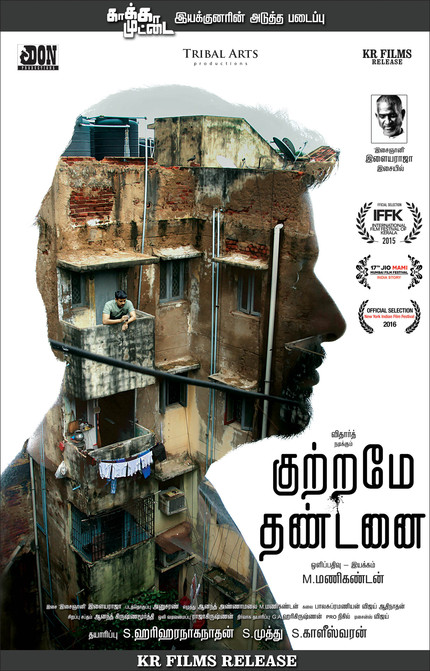 M. Manikandan is one of a small group of filmmakers from Tamil Nadu who are a hair's breath away from making a huge international splash.

Two years ago his film Kaaka Muttai (The Crow's Egg) wowed Toronto IFF audiences with its whimsical but realistic take on the plight of poor children in Chennai who have just discovered the existance of pizza and whose only desire is to taste it for themselves, no matter what it takes. That film was a strong contender for India's 2015 National Award for best film, the most prestigious honor given in the country. It lost out by the smallest of margins to Chaitanya Tamhane's Court, a worthy opponent.

This year Manikandan is back with not one, but two films worth noting for international audiences. The first is a film that we reviewed back in April as part of the Indian Film Festival of Los Angeles, Kirumi (Virus). That film, about a police informant who gets himself in deep when he starts to get a bit too big for his britches, was directed by newcomer Anucharan and co-written by Manikandan.

This new film, Kutrame Thandanai (Crime is Punishment), is Manikandan's return to the director's chair, and it's an exciting change of pace from Kaaka Muttai.

Actor Vidarth plays Ravichandran, a bill collector who finds himself in the middle of a murder investigation after a pretty young girl in his housing block ends up dead. Ravi seems like a pretty milquetoast, unremarkable guy. He goes to work, pines for a cute girl who works the phones, and goes home again. His only remarkable quirk is one that he keeps to himself, Ravi suffers from severe tunnel vision. The audience is privvy to this information only due to the fact that we are occasionally given Ravi-eye-view shots in which only a tiny circle in the center of the frame is visible.

It's this condition which propels the more thrilling aspects of the story as Ravi is told that he needs to come up with a bundle of cash in order to pay for an eye transplant surgery which appears to be his only way out. At first despondent, Ravi soon finds his testimony is very in demand as one of the last people to see the girl alive. He quickly identifies his unique position and begins auctioning off his word to the highest bidder, the contenders for which are a pair of incredibly seamy characters who are deperate to keep their names out of the papers.

While the film's script is loaded with wonderfully deceptive thrills and twists, the execution at times leaves something to be desired. Vidarth's understated performance as Ravichandran is exceptional, he manages to keep the overarching theme of tunnel vision - both literal and figurative - within reach at all times.

The supporting performances are all quite good as well, especially a bit role from Indian thriller mainstay Nasser as a wise old hustler who tries to set Ravi straight. In addition to exceptional writing and acting, Crime is Punishment also has some wonderfully creative cinematography, not just from the POV of Ravichandran, but also in establishing shots that seem to mimic the twistiness of the film's convulted plot and morality.

On the down side is the ridiculously overbearing score from Tamil film music legend Ilayaraja, which is an overbearing mess of conflicted emotional manipulation. The music whips from the bass-y tones of a taut thriller to the jauntier strains of a pure romance. In Indian films this is pretty much par for the course, however, this film is not a romance at any point, so the music really saps all of the tension from these scenes, and what's worse is that it is really the only sour note in the entire film. I'm convinced that a pulse-pounding thriller lives inside the body of Crime is Punishment, but it is hidden behind this background score that truly does the film a disservice.

Manikandan is, without question, one of the most interesting and talented filmmakers of a region on the upswing. Kaaka Muttai was a critical and box office blockbuster and Crime is Punishment is further confirmation of his talents. This is certainly a a film worth seeking out, though at the moment it rests on the second tier of Tamil New Wave dramas right below films like Visaranai and Kirumi.

Manikandan already has a new film in production and this film's slight deficiencies do nothing to dissaude me from my excitement at seeing his next., but as it stands, Crime is Punishment is merely good, whereas with a better score and a little bit tighter editing it could've been great.

More about Crime is Punishment