Now On Blu-ray: Pablo Larraín's THE CLUB, Stomach-Churning Drama By The Sea 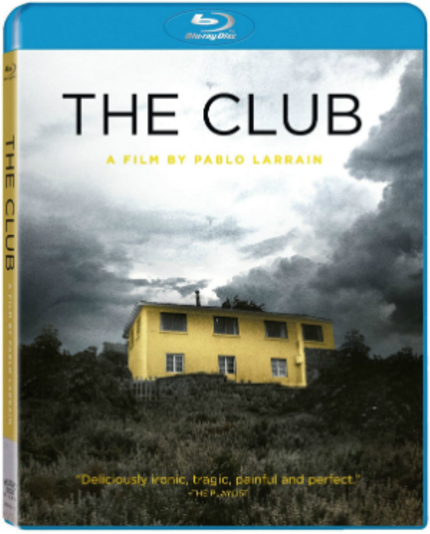 A suffocating drama, Pablo Larraín's The Club (El Club) feels like an painful attack by a swarm of mosquitoes.

It's not, by the way, to be mistaken for Pablo Trapero's film titled El Clan,/b>, which also came out last year. * (Trapero is in Argentina, Larraín is in Chile, and I was the one who kept mixing them up). Our own Jaime Grijalba Gomez, who lives in Chile, considers The Club one of the five best Chilean films of 2015. Here are his comments:

"Pablo Larraín, who also directed the Oscar nominated No and Post Mortem, among others, this time sets his eye towards the idea of a community formed through secrecy and crime.

"A group of priests from all over the country live in the same house where they are hidden by the Church so they can escape the crimes that they commit, whether they be child abuse, dictatorship collaboration, among others that are described in detail when an investigator turns up to see if the Church decides to close these kind of places that house criminals.

"Critical and at times a bit ridiculous in its portrayals of certain situations and characters, it remains mostly strong in the strong parts and stomach churning in those who want to be stomach churning. The cinematography surprises, as well as the characterization from every actor, that gives this drama enough punch for it to become something special."

After watching the film twice, once at last fall's Fantastic Fest and again this weekend on Blu-ray, I agree with everything that Jaime wrote in his capsule. It's not an easy film to watch, especially an early scene, in which an adult survivor of childhood sexual abuse recounts in detail the horrifying crimes committed against him by a priest.

Yet my second viewing, especially one outside the hustle and bustle of a genre film festival, enabled me to place The Club into greater context, and contemplate the differences between the U.S., where I live, and Chile, where I have only visited once. Which brings me to the special features on the home video release from Music Box Films.

The Club looks like it was filmed with natural light, which means that some scenes shot in a seaside house are blown out and appear somewhat unnatural to untrained eyes (like mine). In an interview, Larraín talks about certain camera lenses that are very precious to him because they capture exactly the kind of image he wants, which makes me think The Club was shot on film.

I confess: I lack the lighting expertise and photographic experience to describe the effect in greater detail. It looks sufficiently different from mainstream films to be noticeable, and I noticed it far more on Blu-ray than when I saw it at Fantastic Fest (where I'm guessing it was projected on digital). In any event, as the movie rolls along I became less distracted with the visuals and more absorbed in the characters.

The English-language subtitles were well-timed and easy to read.

As to special features, an hour-long interview with Larraín is included, allowing him to speak extensively about what initially sparked his interest in the subject matter, the research he did, the real-life inspirations, the approach of the Catholic Church in Chile to child abuse by its priests, and much, much more. For those of us who don't live in Chile, it's an invaluable primer, and even if you're only interested in the movie itself, there's more than enough information to make it worth listening to in its entirety.

In a charming separate 10-minute interview, actress Antonia Zegers talks about her past experiences with Larraín, his habit of rewriting entire scenes and then handing the new pages to the actors on the day of shooting, and her joy about the entire experience.

The film debuted at the Berlin Film Festival in February 2015, and a five-minute excerpt from the press conference is included. It's brief, but includes comments from Roberto Farias, who plays a child abuse victim.

An audio commentary is provided by Antonia Zegers, who plays a former nun working with the priests as a housekeeper and caregiver, and Alfredo Castro, who plays a particularly creepy priest.

The trailer is included, as well as a booklet featuring a fine critical essay by Jessica Kiang cast and interviews with Larraín and Castro.

As noted, The Club is not an easy film to watch, but it is extremely well-made and the cast delivers a collection of memorable performances. This Blu-ray from Music Box Films is a very fine package.

The film will be available on Blu-ray and DVD on Tuesday, May 3.

* Updated to reflect that Trapero's film does not, in fact, have the same title, as I mistakenly wrote. Thanks to Jessica Kiang for the kind correction.

Do you feel this content is inappropriate or infringes upon your rights? Click here to report it, or see our DMCA policy.
Alfredo CastroAntonia ZegersChilePablo Larrain

More about The Club