Cannes 2016 Review: THE NICE GUYS, A Trifle With Great Chemistry 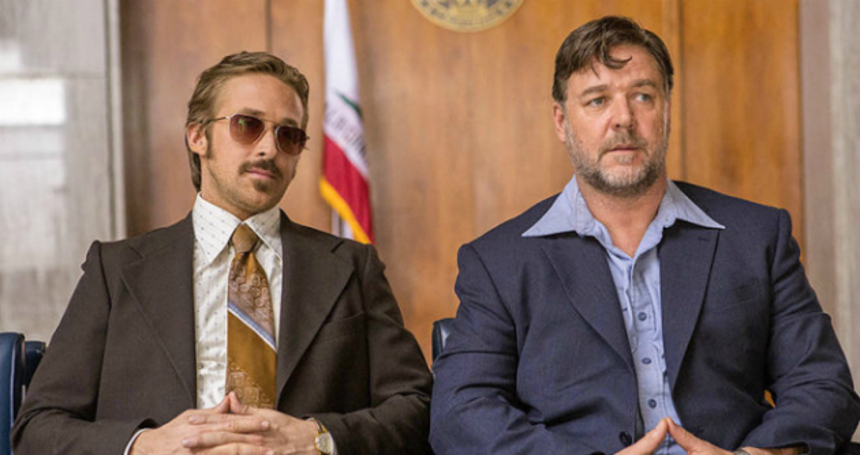 "I'm getting too old for this shit". Immortal lines of cinematic splendour, words so titanic that if the scribe of Lethal Weapon had only been responsible for these, then he'd be legendary. Yet Shane Black has done more than write the 1987 buddy action film; he acted in Predator, he played with noir in Kiss Kiss Bang Bang, and he even tried a hand at Marvel mayhem with Iron Man 3.

The film sinks or swims based on the chemistry of the leads and Russell Crowe and Ryan Gosling manage to pull it all together. Crowe in particular hasn't been this good in years, managing to play hardnosed and slyly comical in a role that he inhabits well. Similarly, Gosling brings a goofiness that's been subdued in some of his more recent works, making a fine foil for his fellow protagonist.

Perhaps most surprising of all is young Angourie Rice, an Aussie like Crowe who plays Gosling's daughter. Yeah, there's a kid sidekick, yet Rice's mix of charm and precociousness elevates rather than smothers the fun. There's a sparkle in the girl's eye that's equal parts mischief and cunning, and it works very well in combo with her paternal cast mates.

Story-wise, the beats follow pretty much where you'd expect them to, with a decidedly convoluted path to get somewhere reasonably telegraphed early on. Still, the ride's quite fun along the way, and Black's costume designers and music supervisors have a ball in making the 70s scene look and sound particularly glossy. There are enough moments of twisted surrealism thrown in to keep things off kilter while managing to tweak things enough to keep it fresh.

Unfortunately the film stumbles when Black gets a bit too precious with his material. Several lines are clearly trailer fodder, awkwardly pigeonholed into otherwise snappy dialogue. Some jokes land flat, while others feel like they've been so preciously constructed that they read better on the page.

Still, for most of the running time you're just having a ball watching these characters traipse around, get into altercations, and work together to solve the big case. It's a fun little night that might seem a little tired at times but never quite runs out of steam. The Nice Guys is a nice enough flick, one with some moments that really shine and a cast with great chemistry, adding up to a trifle of a summer film that still has some pedigree behind it in terms of story, character development and echoes to classic cinema.