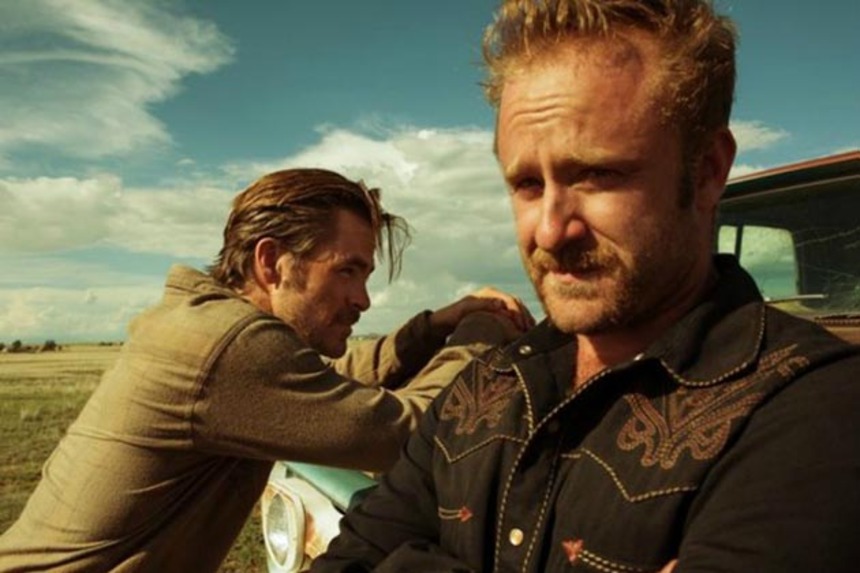 Bank robbers. Texas Rangers. A sun-drenched landscape. Oil derricks. Tumbleweeds. A loose cannon ex-con. A brother just trying to do the right thing. An aging lawman on the doorstep of retirement. Throw it all in a blender and you're bound to get some form of classic outlaw Western. But nine times out of ten, you're also bound to end up with something pretty generic.

That's not the case for Scotsman David Mackenzie. Best known for his stellar UK prison drama Starred Up, Mackenzie brings the same vibrant energy and grit that he displayed in that film to his first foray in the American Western genre, Hell or High Water. With excellent performances across the board and a taut script, Mackenzie has made the very most of those old ingredients and the result is something that feels simultaneously classic and fresh.

Connecting those above dots, Chris Pine plays Toby (the brother just trying to do the right thing). Ben Foster plays Tanner (the loose cannon ex-con), who gets convinced by his little brother Toby to rob a series of banks for an altruistic cause that is revealed throughout the film. Truthfully it doesn't take too much convincing, as Tanner is always up for a caper, especially if guns are involved. As both Toby and Tanner express in one of the lighter moments, neither have any idea how Tanner has managed to spend the last full year out of jail. Foster dives head first into this slightly deranged but still likable character and his vibrancy helps the film maintain its high energy.

On the other side of the line is an old Texas Ranger named Marcus (the one about to retire), played by Jeff Bridges. Since the banks that Toby and Tanner are knocking off are just po-dunk local banks, the Feds don't want to bother. But Marcus and his partner Alberto (played by Gil Birmingham) have nothing better to do with Marcus's last few days with a badge and set off to track these bad guys down. What follows is an hermanos y hermanos battle as the lawmen try to catch up with the outlaws before they can finish their plan.

Bridges is in top form as the sardonic old detective with a chip on his shoulder and a bag full of light-hearted racist quips to throw at his partner. In a career full of iconic roles, it seems silly to say, but Bridges was born to play this character and there's simply no one else working today who could do it as well. For a film that has very few weak points, it is totally fair to call Jeff Bridges its strongest.

Not to be overlooked is the air-tight script by Taylor Sheridan. This actor-turned-scribe burst onto the scene with his first produced script Sicario, which shares certain similarities in pacing and milieu with Hell or High Water. The music in the film by Nick Cave and Warren Ellis is also fantastic and really sets the Western Texas tone.

It's not uncommon for a director to struggle a bit when tackling a tried and true American genre like the outlaw Western. Mackenzie thrives. It's clear he has a very bright future (if it wasn't already) and we won't be seeing him riding over the plains and off into the sunset any time soon.

Do you feel this content is inappropriate or infringes upon your rights? Click here to report it, or see our DMCA policy.
Ben FosterCannesCannes 2016Chris PineDavid MackenzieJeff Bridges